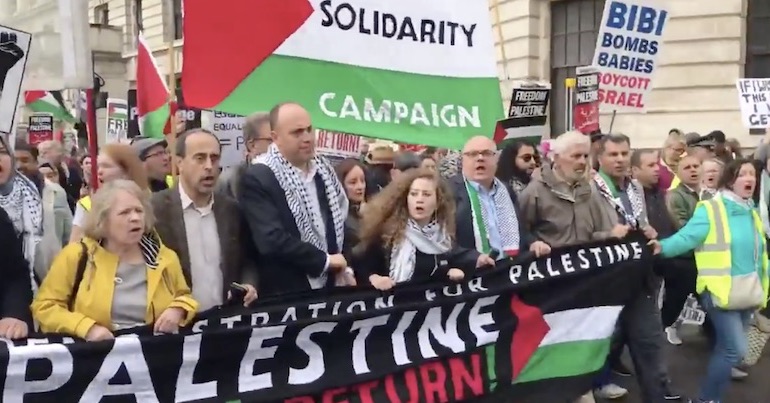 On 11 May, Palestinian activist Ahed Tamimi joined thousands of people demonstrating for Palestinian rights. Organisers said that they were protesting the “unprecedented attacks to the collective rights of the Palestinian people”.

In 2017, Israeli forces arrested Tamimi. At the time, she was 16 and spent eight months in prison. She joined thousands of people who marched to show they “stand with Palestine”:

We stand with Palestine pic.twitter.com/zJmdiq1TPM

As the march moved past Downing Street, demonstrators called on the government to “stop arming Israel” and to “stop bombing Gaza”:

As we move past 10 Downing Street, thousands are chanting “stop arming #Israel, stop bombing #Gaza!” The UK government must end its complicity in the oppression of the Palestinian people! #ExistResistReturn pic.twitter.com/8I7jxe5VIx

As Israel continues to flout international law and violate human rights, there is a responsibility on the global community to hold it to account and push for an end to the oppression of the Palestinian people. Palestinians have called for renewed solidarity to support their resistance to unprecedented attacks on their collective rights.

In the week when Palestinians commemorate their dispossession in 1948, we are marching to send a clear message that we stand in solidarity with them, and to call again on the UK government to end its complicity with Israel’s illegitimate control of Palestinian lives.

“We will not be made victims! We will continue to resist!”

Organisers explained that they are protesting against “unprecedented attacks to the collective rights of the Palestinian people” by the Israeli state. They’re calling for Israel to be held to account for its ongoing violations of international law.

Tamimi spoke to huge crowds at a rally after the march saying: “We will not be made victims! We will continue to resist!”

Ahed Tamimi thanking the crowds for their ongoing solidarity with the Palestinian people!
She says: “We will not be made victims! We will continue to resist!” 🇵🇸 #ExistResistReturn #FreePalestine pic.twitter.com/9yKy4RKm0n

“From the river to the sea, Palestine all be free”

Fantastic speech from activist Ahed Tamimi, the young girl jailed by Israel, at the march for Palestine in London today. #ExistResistReturn pic.twitter.com/ByyCAUiU5M

At the National Demo for #Palestine in Whitehall – great to see Ahed Tamimi just now give a speech and also MP @RichardBurgon along with various others. pic.twitter.com/JTZyirfaPy

Thousands and thousands are gathered in Whitehall right now! What an incredible show of solidarity! The Palestinian people are not alone ♥️🇵🇸 #ExistResistReturn #FreePalestine pic.twitter.com/Dc3cW81Ao4

The silence of many governments, including our own, has been deafening. The UK government should instead unequivocally condemn the killing of demonstrators – including children, paramedics and journalists – and other civilians, and freeze arms sales to Israel.

As organisers noted, this protest comes just a week after one of the deadliest bombing assaults on Gaza since 2014. Israeli forces killed at least 25 Palestinian people, including several children. Since March 2018, when Palestinian people began the Great Return March (Nakba), Israel has killed over 200 unarmed protesters including journalists, medics, and children. An estimated 29,000 people have also been injured. Nakba (Arabic for “catastrophe”) acknowledges the displacement of Palestinian people after the founding of the Israeli state.

The groups stated that Israel’s Nation State Law writes discrimination against Palestinians into the constitution. In recent elections, Benjamin Netanyahu also promised to annex Israel’s illegal West Bank settlements. Alongside leaked details of Trump’s impending ‘Deal of the Century’, there are many critical obstacles to achieving even the most basic fundamental rights for Palestinian people. But this protest sent a huge and powerful message that thousands of people stand with Tamimi and with all Palestinian people to end this oppression.