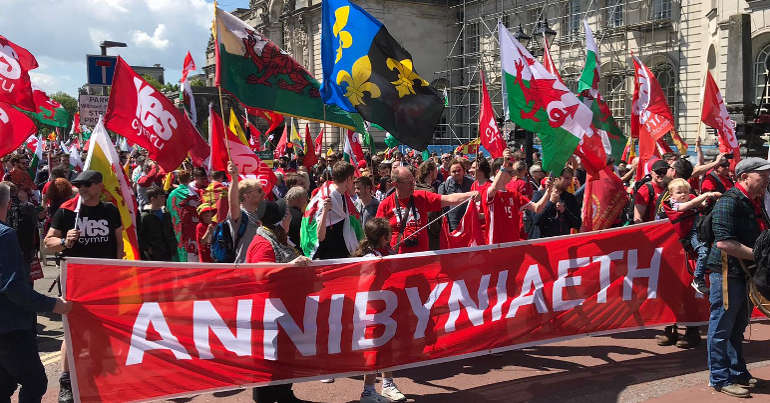 Thousands of people took to Cardiff’s streets on 11 May, calling for an independent Wales. This was the first #IndyWales march of its kind, and people tweeted that it was an “emotional” day. The Welsh crowd was joined by supporters from Scotland, Breizh (Bretagne), Catalonia, Kurdistan and other regions struggling for their own self-determination:

It was a privilege to be part of a march of thousands of people calling for independence today. I have no doubt – independence is near. It’s very near. We must now seize the opportunity before us. #IndyWales @AUOBCymru

The Union Jack has been lowered in Cardiff and the sun is setting on the British empire #indyWales #AUOBCymru #DissolveTheUnion pic.twitter.com/RdwmSvVU2a

The march was organised by several groups, including AUOBCymru, YesCymru and Undod.

Llywelyn ap Gwilym, a spokesperson for AUOBCymru said in a press release:

The debate around Wales’ constitutional future has intensified since the vote for the UK to leave the European Union. Several groups which believe that Wales and its people would have a better future as an independent nation outside the UK, including YesCymru and Undod, have strived to engage the broader public and bring the debate into the mainstream. There is an increasing realisation that independence is normal.

The Canary spoke to Undod, a group which is calling for “radical independence for Wales”. A spokesperson said that the march was a “joyous, momentous occasion.” They stated that Undod:

seeks to reject the predominant capitalist, elitist politics that has caused such great inequality, that is destroying our natural environment, and is undermining our communities and language.

They went on to explain that:

Independence must be meaningful and work to improve the lives of the majority, and rather than emulating the state politics that has caused so much misery, we must work towards a democratic, non-hierarchical Wales where communities are empowered.

The march succeeded in connecting up international struggles, and the Welsh Kurdish community were at the forefront. The Kurdish People’s Assembly Wales told The Canary that “Kurdish people stood shoulder to shoulder with the people of Wales in their struggle for independence.”

In the 21st century, despite the differences in our geographies, the seeds of socialism will sprout together, and we will build an ecological society in our common struggle for a free world of solidarity.

Undod also stressed to The Canary that the struggle for Welsh independence is an internationalist struggle:

There is a lot of work to be done, and today was only the beginning, but it was also great to hear the Kurdish activist Agit Ceviz speaking in solidarity, as Imam Sis continues with his hunger strike in Newport. Ultimately, an independent Wales is one that must be internationalist and stand in solidarity with those who are oppressed.”

Featured image via activists (with permission)