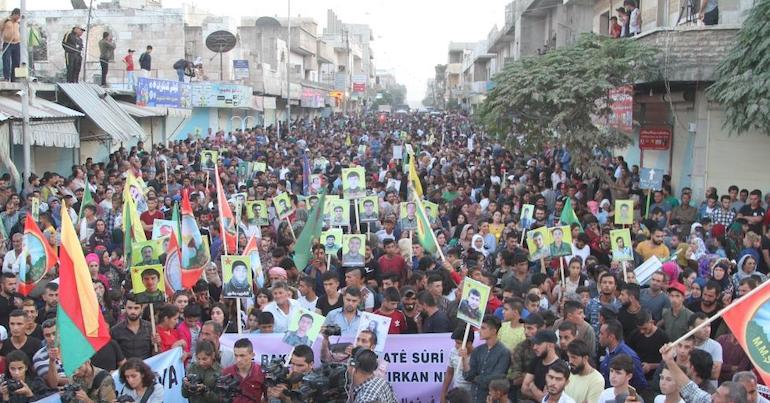 On 6 October, Donald Trump agreed to withdraw US troops from northern Syria (aka Rojava), the region that led the way in defeating Daesh (Isis/Isil). This move followed months of Turkish threats to invade the area and crush its progressive revolution.

By 9 October, the Turkish government claimed Trump has now handed over leadership for “the military campaign against Isis”. A spokesperson for Turkish president Recep Tayyip Erdoğan said:

The Turkish military, together with the Free Syrian Army, will cross the Turkish-Syrian border shortly.

But despite this, reports from the ground in Rojava highlight just how incredible and powerful resistance to Erdoğan and Trump truly is.

“No friends but the mountains”

On October 7, Trump claimed that in his “great and unmatched wisdom” he would destroy the Turkish economy if it took action he considered “off limits”. He later claimed Kurdish people are “special people and wonderful fighters”. His latest agreement with Erdoğan simply undermines this.

Chloe Troadec from the Rojava Information Center told The Canary that this is just the latest in what Kurdish people see as a series of “betrayals and desertions from so-called allies” in the west. She continued:

The Kurdish people have an old saying: “no friends but the mountains,” describing the relative security of the mountainous regions where they historically would bring their sheep to pasture… most Kurdish people strongly believe in this saying and don’t expect to be saved by outside forces.

As she also explained:

Families of North and East Syria have lost 11,000 of their sons and daughters in the fight against the Islamic State, and people are fiercely proud of what they have accomplished. Out of the ruins of the Islamic state and the repressive Assad regime, they are building a new democratic political system, led by women, in unity with all of the diverse peoples of the region.

“Of course,” Troadec continued, “they want recognition for the burden they have carried. “But,” she stressed, people “are not particularly affected by what the president of the United States says on Twitter”.

“There will be chaos once again”

America’s attitude will create a negative impact on the whole region, and what has been built up here, the peace and the stability in this region. …

We have always said that Erdoğan’s threats are serious. There is no serious international will to bring an end to the Syrian crisis. … There will be chaos once again.

On the ground reports from Rojava highlight the impact of the latest actions for Kurdish people:

2. didn't care what would happen to them next. And again history repeats itself. After over 11K Kurdish deads on the battlefield. After 25K lost their limbs, health fighting jihadist filth from EU, US, & all the rest of world. Kurds served their goal & are now to be dismissed

“Refusal to allow Turkey to enter their land”

Troadec told The Canary that “the two cities facing the biggest threat are Tell Abyad and Sere Kaniye (Ras Al-Ain)”. But Kurdish people have stepped out in an incredible way to protect these areas. As she explained:

People from the regions of Kobanê and Jazeera gathered there in masses and are maintaining permanent human shield protests along the border. This constitutes thousands of people, from all sectors of society, coming together to dance, sing, and affirm their refusal to allow Turkey to enter their land.

She also said that “marches, protests and official declarations” took place in cities across the area. Tribal leaders “called for massive mobilisation” and support from the international community. Meanwhile, war veterans marched to UN offices in Qamishlo.

So far, Troadec said “the situation is quite calm” in other areas. She said they’d observed “some troops heading towards the border”. But she also explained that incredible resistance is building to face potential attack:

Something really remarkable to see is city residents – the mothers, youth and elderly – organised in civil defence forces. These civilian units have existed for several years, and are now conducting their preparations and encouraging more people to join security shifts.

Troadec explained that “most” Kurdish people view “the departure of American troops as a betrayal”. But what’s crucial is that they also “trust in their own self-defence forces to protect them”. However, as she also stressed:

Still, many people feel anxious, particularly those who were forcefully expelled from their homes in Afrin by the Turkish invasion last year.

In 2018, Turkey and its allies invaded and occupied Rojava’s Afrin region. As The Canary previously reported, this this led to:

extensive looting, “widespread human rights violations”, and war crimes. It also allegedly relied on the support of fascists and extremist groups similar to al-Qaeda. As one northern Syrian media outlet has argued, this attack amounted to “ethnic cleansing“.

Troadec said that the grandmother of a family who fled from Afrin:

told us of her experiences of the war, describing how one of her daughters was killed by the Turkish army while defending Afrin with the YPJ women’s units, and how her son died in the war against ISIS.

She expressed that she could not bear more grief and wanted to just “be left in peace by Erdoğan”.