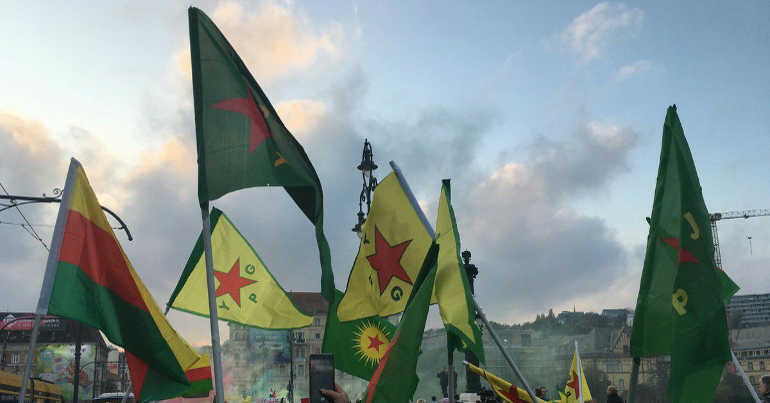 On 7 November, a man who risked his life to travel to fight Daesh (ISIS/ISIL) was imprisoned for “terrorism“. His sentence highlights the injustice of listing the Kurdistan Workers’ Party (PKK) as a terrorist organisation.

Those who have put their lives on the line to fight against Daesh’s massacres and genocide should be celebrated. Instead, the British state interrogates them, arrests them, and imprisons them.

Fighting ‘against the sick regime and ideologies of Daesh

Aidan James had travelled to Northeast Syria (aka Rojava) in 2017 to join the Peoples’ Defence Units (YPG) fight against Daesh. Before going he reportedly posted on Facebook that he intended to:

The jury did not find that attending a military training organised by the YPG in Syria was enough to find James guilty of terrorism. However, he was found guilty of attending a training in Makhmour camp in neighbouring Iraqi Kurdistan and sentenced to 12 months in prison. The judge found that James had received military training at a “PKK base”.

He was also sentenced to three years in prison for possession of cocaine with intent to supply. The drugs had been found after police searched his home because of statements he had made about his intention to travel to Syria.

The court found James not guilty of receiving YPG training in Syria, and even complimented him for it. According to judge Edis:

The force for which you were being trained was defensive force against a lethal and genocidal threat from ISIS.

But, in defiance of all reason, Aidan was imprisoned for allegedly receiving PKK weapons training at the Makhmour camp. That training was clearly given for the same purpose as the YPG training – in order to equip him to fight against the genocidal threat from Daesh.

So what was this camp that James was imprisoned for going to? According to Edis:

On the way to Syria you spent a month in the refugee camp at Makhmour in Iraq which is a place where, on any view, the PKK was in a strong position. Indeed, had they not been there in force to defend it they would have been abandoning over 12,000 Kurds to potential slaughter by ISIS.

Makhmour refugee camp has existed since the early 1990s when the Turkish state was committing war crimes, expelling Kurds from their villages and not allowing large numbers of Kurds who had fled across the border to Iraq to return… The [PKK] provides all the basic necessities for people in order to live [in the camp].

The PKK was established in Turkey in the 1970s and has struggled for Kurdish autonomy since then. Since the 1980s, the PKK has intermittently been involved in armed struggle against the Turkish state.

The Turkish state represses Kurdish people, leftists, and those who do not define themselves as Turkish.

As the Canary has previously reported, the PKK:

has fought for Kurdish freedom and autonomy since the 1970s…Turkey has defined the PKK as a ‘terrorist group’. Most Western states followed suit, as they see Turkey as a key trading partner and NATO ally.

Abdullah Öcalan, PKK co-founder, has been imprisoned by Turkey for over 20 years. People around the world are calling for his release. According to British human rights lawyer Margaret Owen:

there will be no peace between Turkey and the Kurds until Öcalan is released, you cannot negotiate a peace while the leader of the other side is in prison… He’s been asking for peace, it was Turkey who broke off all those peace negotiations in 2015.

European courts do not view the PKK as a terrorist group

In April 2019, Mohamed Elmaazi wrote for The Canary:

In a landmark decision, the Belgian Court of Last Resort recently decided that the Kurdish PKK (in Turkey) is a “party to an armed conflict” and not a “terrorist organisation”. The decision is especially significant because it means that terrorism laws can no longer be used against Kurdish people in Belgium simply for supporting the PKK. And it’s yet another legal move which calls into question the hostile stance towards the PKK of governments like the UK’s.

The Belgian court’s decision in March 2019 is in line with another recent ruling by the Court of Justice of the European Union (CJEU). In November 2018, the CJEU determined that it was wrong for the Council of Europe to list the PKK resistance group as a terrorist organisation from 2014 to 2017.

But no similar rulings have been made in Britain, and the PKK remains on the list of banned groups.

Matheou told The Canary that banning the PKK criminalises the Kurdish community:

[The] listing functions to really criminalise the Kurdish community, and also solidarity activists who get put under investigation for support for a terrorist organisation. Even though [the PKK] has never carried out attacks outside of Kurdistan and the broader region.

The only people who do want to pursue this are the state and the state’s prosecutors – presumably for behind the scenes diplomatic reasons, to keep smooth relations with the Turkish state.

There is not going to be a resolution [to this] as long as the PKK is treated as beyond the pale, in spite of all of the facts of it’s own conduct.

It’s more important than ever to demand that the PKK is removed from the list of banned terrorist organisations. The inclusion of the PKK on this list is facilitating the criminalisation of the UK’s Kurdish communities. It’s also allowing the British state to arrest and imprison people like James, who have joined the fight against Daesh.

We need to stand with those who are fighting for freedom and direct democracy in the Middle East. In order to do this, we must call for the decriminalisation of the PKK here in Britain.