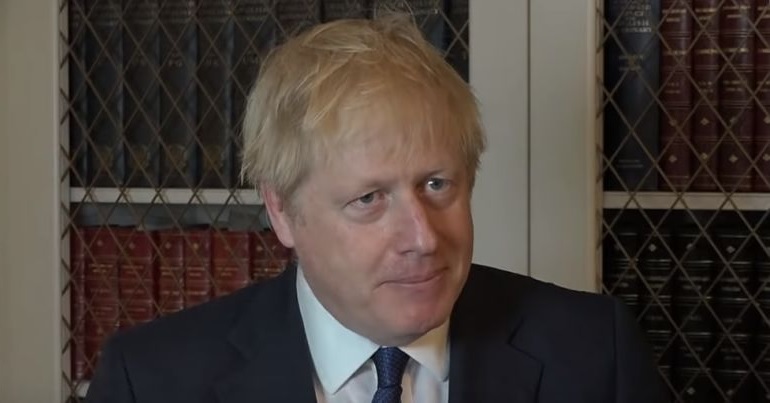 A new exposé reveals that a US thinktank eager for war with Iran has been throwing money at key members of Boris Johnson’s cabinet, including the PM himself.

Writing in the Daily Maverick, journalist Matt Kennard reveals that the American Enterprise Institute (AEI) has spent tens of thousands of pounds on Conservative ministers. Given the current high tensions between the US and Iran, and the UK government’s response to them, the funding is very worrying indeed. This is especially so considering the fact that the AEI has been referred to as the “intellectual command post of the neoconservative campaign for regime change in Iraq” and has been banging the drum for war on Iran for years.

Kennard reports that Johnson travelled to the US in September 2018. There, he received the Irving Kristol Award from the AEI. As Kennard explains:

Speaking at the organisation’s annual dinner where he collected the award, Johnson gushed:

you could have knocked me down with a feather when I got the news… I’m absolutely thrilled to be here at the American Enterprise Institute.

This is a very important institution. I followed the work of AEI scholars and of people associated with this body, for many, many years, and you have been incredibly influential and drivers for change, and for things I believe in.

As previously mentioned, one “change” the AEI drove in the past was regime change in Iraq. As the libertarian Cato Institute noted in 2015:

both inside and outside the Bush administration, American Enterprise Institute scholars played a key role in making the case for war.

Johnson is not, however, alone in being courted by this thinktank. The AEI holds a secretive conference each year. Three of Johnson’s ministers have attended it. Chancellor Sajid Javid went six times between 2011 and 2018. The AEI apparently funded these trips to the tune of £31,285.19, according to Kennard. Chancellor of the Duchy of Lancaster Michael Gove also attended all AEI conferences between 2015 and 2019 bar one. Kennard says the AEI has “gifted” him £22,763.04 over the last four years for his trouble. Furthermore, secretary of state for international trade Liz Truss received £8,200.54 from the AEI to cover the cost of speaking at the conference in 2019.

Donald Trump assassinated an Iranian general on 3 January. In response, Iran struck bases in Iraq where US forces had been stationed days later. With tensions so high, the risk of an all-out war – by accident or design – is very real at this point.

Kennard describes “confronting Iran” as being “one of the AEI’s signature issues”. He writes:

Many US architects of the invasion of Iraq, who have also pushed for bombing Iran, are associated with the AEI, such as former national security adviser John Bolton, who joined the Trump administration directly from the AEI, and former vice-president Dick Cheney, who sits on the AEI’s board.

Indeed, in an October 2019 report, AEI resident scholar Frederick W Kagan shared his thoughts on how the US should respond to a drone attack on Saudi oil facilities by Yemen’s Houthis. The Houthis’ attack was an effort to stop the Saudis’ war on Yemen, which began in 2015. A Houthi spokersperson said after the drone attack:

But Kagan laid the blame for the assault squarely at the feet of Iran, which backs the Houthis. In response to the drone attack, Kagan argued:

Kagan is a director of the AEI’s Critical Threats Project. Set up in 2009, this project aims to “inform and educate policymakers, the intelligence and military communities” on threats to US security. As Kennard points out:

The project has two teams, one of which focuses exclusively on “threats posed by Iran”.

The company they keep

Johnson took his time to comment on Trump’s assassination of the Iranian general. When he did finally respond, he effectively backed Washington’s illegal act of aggression, while calling for de-escalation of the crisis. Responding to a question on the issue from Labour leader Jeremy Corbyn in parliament, Johnson said:

I think that most reasonable people would accept that the United States has a right to protect its bases and its personnel.

The United States’ actions have undoubtedly escalated the risk of a dangerous conflict in an already destabilised region, putting civilians, UK troops, and nationals at risk, and leaving the Iran nuclear deal in danger of being dead in the water.

Isn’t the truth… that this prime minister is unable to stand up to president Trump because he’s hitched his wagon to a trade deal with the United States, and that prioritises everything else that he ought to be considering?

Kennard’s revelations show that Johnson’s relationship with Trump isn’t the only cause for concern, however. The company the PM and his ministers are keeping with the US’s warhawk thinktank the AEI is another. At least it is for anyone hoping that the UK government is capable of playing any stabilising role in the dangerous tensions between the US and Iran.