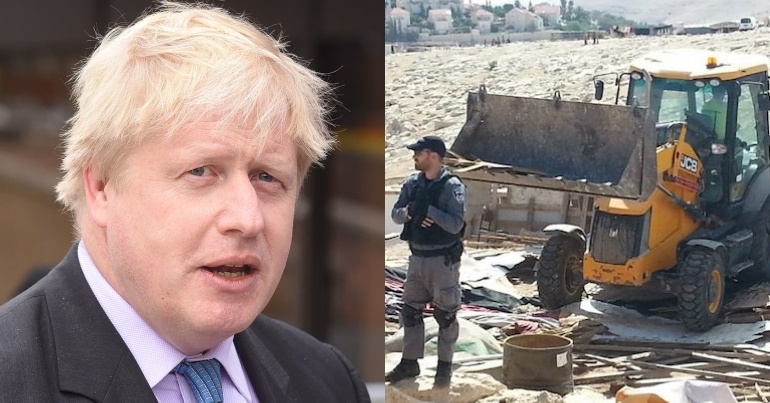 British company JCB has been named on a UN list of businesses involved in Israel’s illegal settlements. Comasco, JCB’s exclusive distributor in Israel, has also been named on the list.

JCB is a major donor to Boris Johnson and the UK Conservative Party.

To give just one example, on 4 December 2019, a JCB machine was used in demolitions of Palestinian homes in a Bedouin community outside Jerusalem. This demolition alone resulted in 13 people being made homeless, including nine children.

According to research group Corporate Occupation, JCB machines were used in at least 130 demolitions during 2018, including the destruction of at least 2 schools and 31 homes.

JCB equipment has also been used in the construction of Israel’s illegal settlements and its apartheid wall. Both of these are illegal under international law.

An Israeli grassroots group, the Israeli Committee Against House Demolitions (ICAHD), is calling on its British supporters to campaign for JCB to “cease to be involved in violations of international law”.

UK campaign group Stop the Demolitions is also calling for action against JCB. According to the group’s website:

As people in the West Bank face the guns of the Israeli military to resist the demolitions of their homes, international solidarity movements can take action against the companies manufacturing the bulldozers.

In December 2019, Lawyers for Palestinian Human Rights made a human rights complaint against JCB over the company’s involvement in settlement construction and home demolitions.

A major donor to Boris Johnson

The Bamford family has an estimated wealth of £3.6bn. Since 2001, Electoral Commission records show the Bamfords and JCB have given “almost £10m in political donations”, primarily to the Conservative Party and groups “campaigning to leave” the EU.

The Canary contacted the prime minister’s office to ask for comment on the fact that a major donor had been named in the UN’s report. But we had not received a reply at the time of publication.

‘The British government is complicit’

According to the ICAHD:

JCB products are used by the Israelis to demolish Palestinian homes, and to help build settlements in occupied territory. Both the demolitions (hundreds a year, affecting thousands of people) and the settlement building are illegal under international human rights and humanitarian law; they violate the Fourth Geneva Convention. JCB is therefore complicit in potential war crimes, and the British government is complicit by not acting positively to discourage the involvement of British companies

The ICAHD wrote, in a sample letter that ICAHD supporters are being asked to send to JCB chair Anthony Bamford:

[We are] very disturbed to see that JCB is listed by the United Nations in their recent report as one of the international companies involved in illegal Israeli settlements in the occupied Palestinian territories (OPT). JCB equipment is also involved in the illegal demolition of Palestinian homes. Your company is therefore complicit in systematic injustice, and violations of International Humanitarian and Human Rights law, in other words complicit in activities which amount to war crimes under international law. It is shocking and shaming that a respected British multinational company is in this position.

I call on you to cease to be involved in violations of international law, by ensuring that in future your equipment is not sold either directly to Israel or indirectly to other companies involved in illegal activities in the Occupied Palestinian Territory.