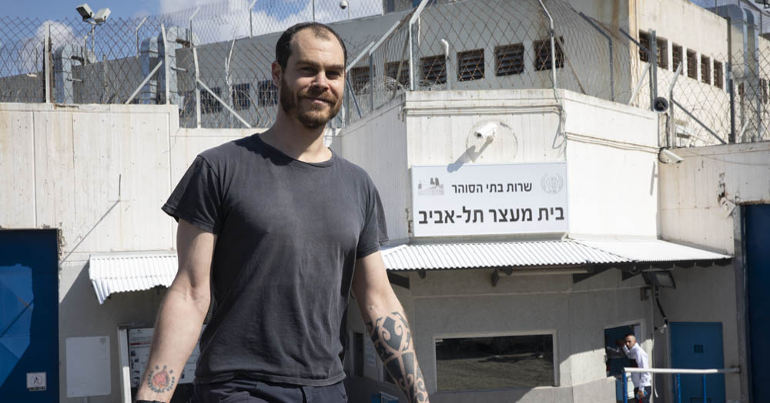 An Israeli anarchist has been released from prison today. Jonathan Pollak was imprisoned after a right-wing group filed a proceeding against him. He was released after the Israeli Attorney General’s office ruled against the claim by right-wing NGO Ad Kan (Until Here).

Pollak had been in jail since early January.

NOW: Israeli authorities release anti-colonization activist, Jonathan Pollak, who was arrested on January 06 after extreme-right group Ad Kan filed a suit against him for protesting in the #West_Bank and allegedly “attacking IDF soldiers”. Photo by: Oren Ziv / Activestills pic.twitter.com/IZaW75g0pE

Pollak had refused to pay bail to secure his own release. He said that he would not pay the bail because he refused to recognise the legitimacy of a system which refuses to treat Palestinians equally. Active Stills tweeted:

During his detention, Pollak refused to pay a NIS500 bail to desist from "recognizing the legitimacy of the Israeli system". Recently, the Attorney-General's office ordered a criminal probe against Pollak for "incitement to terror" over an article published online. pic.twitter.com/ca0egXOyMM

“A system that is rigged against justice”

Mohammed Khatib, one of Pollak’s Palestinian comrades, wrote about the arrest last month in 972 Magazine:

My friend Jonathan was arrested… (and not for the first time) on charges similar to those I [have] faced. Unlike me… he will face judgement in an Israeli civil court, one which is supposed to protect the rights of citizens but in practice protects settlers, soldiers, and those who uphold apartheid and occupation. Because he supports our cause, I don’t expect him to find justice.

Due to of the nature of his arrest, and because he is not Palestinian, Jonathan could pay NIS 500 bail and walk out of jail. But he is a principled person. He has seen me and countless other Palestinian friends arrested on false charges, powerless to prove our innocence. So, he has decided to refuse bail and remain in detention instead. He won’t play by the rules of a system that is rigged against justice.

A statement received by The Canary today from the Human Rights Defenders Fund (HRDF) reads:

The Human Rights Defenders Fund is proud of… the endurance of human rights activist Jonathan [Pollak], who was released from custody today. However, it is unfortunate that the Jerusalem Magistrate’s Court chose to cooperate with Ad-Kan’s political prosecution and insisted on continuing a baseless and legally flawed proceeding completely lacking evidence.

At the same time as striking out Ad Kan’s claim, the Attorney General’s office ordered that a criminal investigation be opened against Pollak for ‘incitement to terror and violence’, in relation to an article he wrote in Israeli newspaper Haaretz.

This new move is the next step in a series of repressive policies by the Israeli state and the far right against those who stand up against Israel’s colonial policies. It comes after Israeli defence minister Naftali Bennett indicated that he would issue ‘administrative restraining orders’ to prevent Israelis from attending demonstrations in solidarity with Palestinians. On 18 January, Bennett said:

Tonight, I ordered the IDF, for the first time, to issue administrative restraining orders against left-wing anarchist activists, who carry out violent acts against IDF soldiers, mainly in events carried out against the [separation] fence in Bil’in, Naalin, Kadum and Nabi Salah – and are led by Jonathan [Pollak]

The Canary has been told that these orders have not been carried out. But Bennett’s threat, timed as it was to coincide with Ad Kan’s claim against Pollak, suggests that the Israeli state and far-right groups like Ad Kan are working hand in hand. According to HRDF:

This type of incitement against human rights activists by government officials is another testament to the close cooperation between extreme-right organizations such as Ad-Kan and State authorities and officials.

Joint struggle is more important than ever

Israeli citizens like Pollak, who are willing to stand alongside Palestinians, are integral to the struggle against Israel’s colonisation of Palestine. It is no surprise that the Israeli state is going out of its way to silence them.

The Israeli army is currently engaged in the repression of mass Palestinian demonstrations against Donald Trump and Benjamin Netanyahu’s new plans for a massive land grab in the West Bank. Joint struggle between Israeli and Palestinian opponents of these policies, coupled with international solidarity, is more important than ever.