'We will not leave our land, we will fight til the end' say Palestinians of the Jordan Valley - Canary 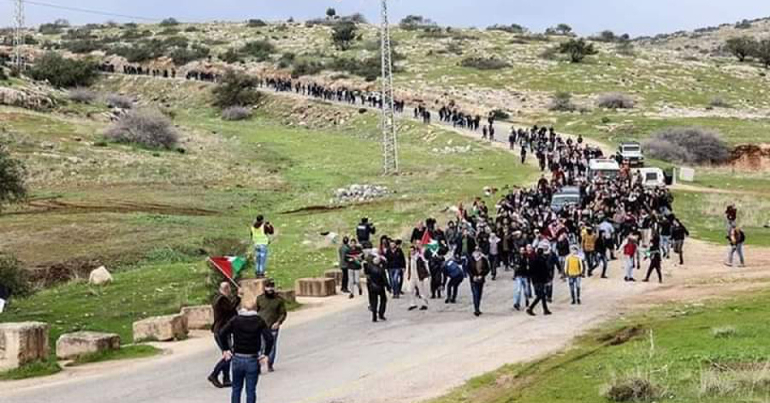 Palestinians in the Jordan Valley have been demonstrating against US President Donald Trump’s so-called  ‘Deal of the Century‘ for Israel/Palestine.

Trump’s deal, announced in January, gives US approval to Israel’s plans to annex the Jordan Valley, part of the occupied West Bank. Israeli leaders have wanted to claim the Valley for Israel since it was illegally occupied by military force in 1967.

The Jordan Valley is home to 65,000 Palestinians. Since the occupation in 1967, almost 50 illegal Israeli colonies have been established across the Valley, housing 13,000 colonists.

The Trump deal is not a peace deal

According to Jordan Valley Solidarity (JVS):

The Trump deal announced is not a peace deal, but a war against the Palestinian people and their private property. This is the truth because the lands to be annexed are private lands for the Palestinians, and there are papers and evidence of ownership.

JVS is a grassroots network of activists from Palestinian communities in the Jordan Valley.

‘Trump’s plan kills any hope left for the peace process’

On 31 January, The Canary wrote:

Donald Trump’s ‘plan for resolving the Israeli-Palestinian conflict’ is catastrophic for Palestinians. One major problem is that it gives the green-light to Israeli politicians’ long-held plans to annex the Jordan Valley.

The Jordan Valley, which includes the Dead Sea region, makes up a third of the occupied West Bank. Last year, Israeli prime minister Benjamin Netanyahu threatened to annex the majority of the valley – roughly 23% of the West Bank.

If the plans go ahead, the seizure of the Jordan Valley will be the Israeli state’s biggest land grab since its 1981 annexation of the Syrian Golan Heights.

[The Jordan Valley has] large water sources such as the Jordan River, the Dead Sea and groundwater, and it contributes heavily to our economy. In addition, the Jordan Valley is the only border we have with Arab countries.Trump’s plan kills any hope left for the peace process and makes it impossible for a Palestinian state to see the light.

Demonstrations have been held across Palestine and Israel since Trump’s announcement:

Palestinian children light candles during a protest stand against the deal of the century, in the northern Gaza Strip. pic.twitter.com/MUjvuHV8Xj

Palestinians in the occupied 1948 land hold protests in rejection of the "deal of the century", today. pic.twitter.com/EtQx36s8jh

Meanwhile, protests outside US embassies across the world have opposed also Trump’s deal:

BREAKING: London Pro-Palestinian Protesters Surround The US Embassy, Rejecting The So Called Deal Of The Century. pic.twitter.com/3zAciMeA6I

A protest in the city of Yabturi, Sweden, against the deal of the century.

The Israeli military has killed four people in the West Bank who came out on the streets to protest the Trump deal. On 8 February, a funeral was held close to the city of Tulkarm for 19-year-old Badr Nidal Ahmad Nafleh, one of those murdered:

Here is video from his funeral today that I attended. Please Pray For His Family.#FreePalestine pic.twitter.com/Jyif9U2HEm

Clashes between young men and the occupation forces on the gate of the town of Qaffin, north of Tulkarm, after the funeral of the martyr Bader Nafila pic.twitter.com/Lmzkfpymt9

To exist is to resist

After the announcement of Trump’s plan, hundreds of Palestinians demonstrated in the Jordan Valley. A spokesperson for JVS told The Canary that demonstrators symbolically entered land that had been declared a closed military area, and planted chickpeas. JVS wrote:

We are escalating the activities that refuse annexation and land theft in the Jordan Valley, last Wednesday [29th February] and [Friday 31st] there were hundreds of Palestinians and internationals who broke through military checkpoints and cultivated lands which are classified as closed military zones. Hundreds of Israeli soldiers were in the Jordan Valley and checkpoints to prevent the Palestinians from reaching their land, but we succeeded in cultivating the land.

The Israeli right is mobilising too

The White House has requested that annexation plans should not go forward until after Israel’s election in March. However, the Israeli settler movement is calling for immediate annexation. Right-wing Israelis demonstrated outside the Israeli colony of Mehola in the Jordan Valley last week, wearing t-shirts emblazoned with the slogan “annexation now”.

‘We will not leave our land’

Palestinians in the Jordan Valley remain defiant. According to JVS:

we will not leave our land, we will fight till the end.

For the embattled Palestinian communities of the Jordan Valley, simply remaining on the lands where they were born puts them in direct conflict with the Israeli state. Trump and Netanyahu are planning to steal the ground from beneath their feet. They need our solidarity now more than ever.