Joe Biden jokingly calls a voter ‘a liar’, but his poll ratings show he has nothing to laugh about - Canary 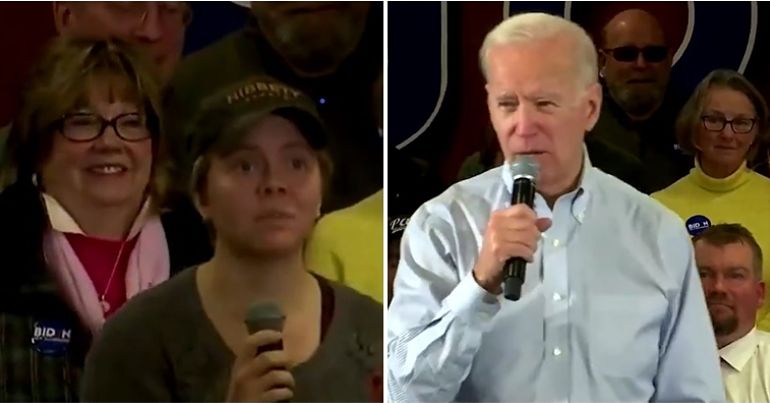 At a Democrat primary event in New Hampshire on 9 February, a young student asked former US vice president Joe Biden why voters should believe he could win the national election. But instead of giving her a straight answer, Biden called her a “lying dog-faced pony soldier”. So his response left a lot of people in the room and online quite puzzled:

Democratic presidential candidate Joe Biden in New Hampshire called a woman who asked him about his Iowa caucus performance a ‘lying dog-faced pony soldier.’ The line was from a John Wayne movie, his campaign said https://t.co/yTfLtvvFBP pic.twitter.com/u8EsmYP1Xr

And while some may dismiss this as a joke, Biden’s recent result in Iowa and his poll ratings show he’s got nothing to laugh about. In terms of the popular vote, Bernie Sanders seems to be in the lead with Democrat supporters.

Answer a question with another question

When the young student named Madison asked Biden about his chances in the national election, he didn’t immediately answer her. Instead, he responded by asking whether she’d ever been to a caucus. He said:

you ever been to a caucus? [student responds that she has] No you haven’t, you’re a lying dog-faced pony soldier.

The student later admitted she hadn’t been to a caucus and just said that she had because she “kind of caved in the moment”. But Biden’s response still left a lot of people wondering why he said that.

Oh, this is bad

And when Biden claimed the remark he made to the student was a quote from a John Wayne movie, nobody else seemed to know it, nor were they impressed: 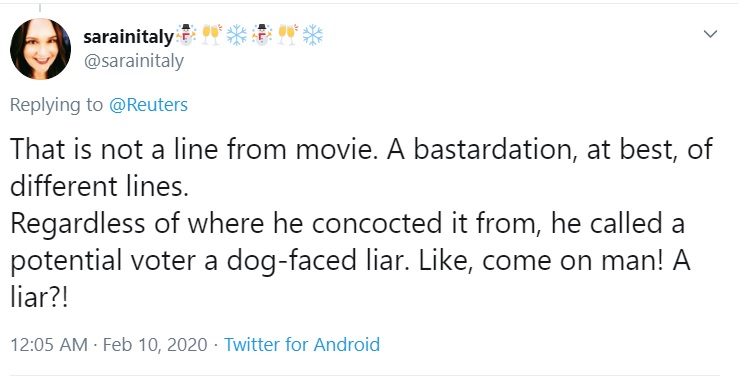 His campaigning style of insulting voters and telling them to vote for somebody else seems to be working.

It’s not the first time Biden has clashed with potential voters. On a previous occasion, Biden pressed a man on his chest and told him “you oughta go vote for someone else”. Biden previously called another voter in Iowa “a damn liar” and then challenged him to a push-up contest.

Establishment figures labelled Biden as the front runner in the Democratic race to take on Trump in this year’s presidential election on 3 November. But so far he hasn’t measured up to that label.

He finished fourth in the first primary in Iowa. And a recent poll, taken ahead of the primary in New Hampshire on Tuesday 11 February, shows Sanders has a commanding lead over other Democrat contenders. 28% of likely voters say they’ll vote for Sanders, compared to just 12% for Biden. This poll puts Biden in third place behind his other rival Pete Buttigieg.

These recent exchanges between Biden and the public might very well be harmless fun, but it does give the impression he seems quite annoyed when challenged. But much more important than that are his poll ratings and recent voting result. The American public so far seems to be countering the establishment’s claim that he’s best placed to take on Trump this November.

And whether it’s the popular vote in Iowa or recent poll ratings, the public seems to be in no doubt at this stage that the best placed candidate to take on Trump is Bernie Sanders.