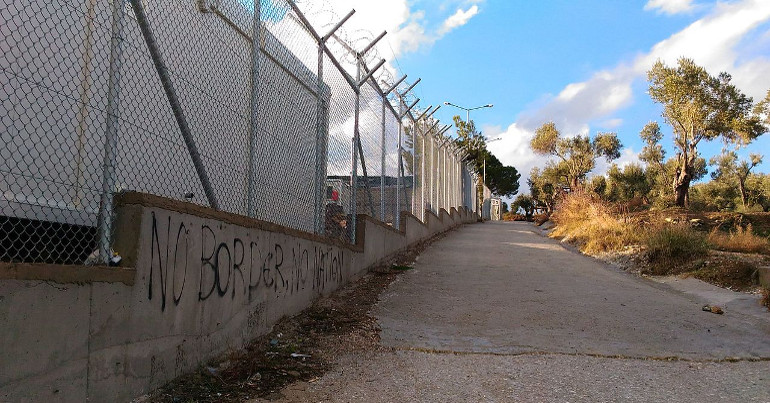 Temperatures have reportedly fallen below zero on the Greek island of Lesbos, where thousands of refugees are living in tents in the EU-funded Moria detention camp.

Temperatures on #Lesvos down to freezing point today. Not an easy night for the 20,000 people trapped in #Moriacamp, with the majority in flimsy summer tents. #refugeesgr pic.twitter.com/R8TyO3GnE6

Grillmeier shared a quote from a young Afghan resident of the camp:

“People in Europe think a #refugee is used to suffer. As if we are made of a different skin, a different mind & soul. But this label passes on quickly to anyone in this world. We are human like you. We have families. We feel. We play + we live.” – Parwana, 16 yo from #Afghanistan

Access to the Greek mainland has been tightly controlled since the 2016 EU-Turkey deal. This has transformed the Aegean islands into what is effectively an open air prison for refugees…The majority live in overcrowded and dangerous conditions in Moria.

4,106 refugees arrived in Greece during January 2020. The majority of them have travelled to the Aegean islands.

Grillmeier places the responsibility for the suffering in Moria on the EU’s migration policies. She continued:

The outrageous suffering of #refugeesgr in the camps on Aegean islands + the heavy burden on the Greek locals is a RESULT of EUs externalizations of migration policies, where no one takes responsibility. A out-of-sight-policy with dangerous backlash on people’s life + security.

Refugees take to the streets

Refugees trapped on Lesbos have been forcefully resisting the conditions in the camp, and are demanding to be transferred to the mainland.

On 30 January, hundreds of women demonstrated against conditions in Moria. According to Are you Syrious:

Around 300 women participated in a protest against the conditions of the Moria Refugee camp on Thursday. In the town centre, signs reading “Moria is Hell” flew in the air as women chanted and asked, “Aren’t we human too?”

Their demands include being transferred out of the Moria hotspot and improving safety for women inside the camp. Moria was originally built with a capacity to temporarily hold 2,000 people, yet is now currently inhabited by more than 19,500.

On 3 February, a procession of refugees attempted to March from Moria to the town of Mytilene. They were stopped on the road by the police wielding batons and not allowed to go any further. Police responded to the protest with extreme violence and tear gas.

Refugees escaping from tear gas shot by anti riot police during a demonstration in #lesbos on Feb 3, 2020. Thousands were protesting against the inhuman conditions inside #moria camp. #refugeesgr #welcometoeurope pic.twitter.com/iKgXmk6DK3

Father of two kids from Afghanistan, one 11 yo & the other 6 yo asking me to record his voice to #EU: “I didn’t come here for money, I came here for safety and for my kids to have an education.” Kids heavily tear gassed. #moria #lesbos #refugeesgr pic.twitter.com/XY6M78qEqs

The situation on Lesbos is deadly, and Grillmeier claims the conditions have been directly caused by the EU’s containment policies. It’s as important as ever to stand up for people attempting to take refuge in Europe, and to oppose the system which is killing them.