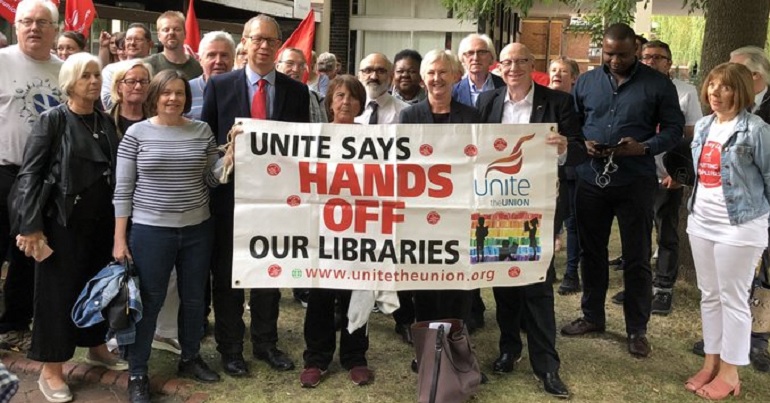 One of the “longest all out, indefinite strikes of recent times” has come to an end. The result has been a victory for workers. This shows that, even against all the odds, an organised group of people can still win big.

Bromley members of Unite the Union had been on strike since June 2019. They worked in the borough’s 14 libraries. Their employer, Greenwich Leisure Limited (GLL), is a private contractor. Bromley Council outsourced the running of libraries to it in 2017.

The 50 staff members voted by 98% to walk out. They took issue with GLL’s plans for the library services. It said that:

The Bromley dispute relates to GLL bosses not filling vacant posts; asking staff to be managers without paying the proper rate for the job; and failing to pay wages owed.

GLL had planned to cut at least 30 jobs in Bromley due to “restructuring”. So the workers walked out. And the strike has been one of the high points of recent trade-union work.

Members of the public reportedly began to boycott the libraries. This was to show solidarity with the striking workers. GLL tried to break the strike. It drafted in other staff to work. But as Union News said, they apparently “simply [did] not know what they [were] doing”. Unite then raised over £20,000 to support its workers.

On 3 February, the staff went back to work. This is because Unite reached a deal with GLL. As News Shopper reported:

the agreement on a library restructure rules out compulsory redundancies, while a consensus was also reached on pay progression and [pay] arrears’ payments.

If you fight you can win! Congratulations to Unite strikers!

It's been a dark few months, but the victory of the Bromley Library workers is a hell of a bright spot. Can't tell you how proud I am to have stood with them and watch them show the whole Labour movement how it's done. https://t.co/JEQoLfB93d

The workers united will never be defeated!!!!✊🏾✊🏾
Proud to have been part of this campaign with the @and_unite comrades in their dispute and fight against the GLL.
We achieve more when we come together. #TrueSolidarity @UniteLondonEast@Unite_Communityhttps://t.co/SDjvrj4ZNo

I want to pay tribute to every single one of our members in Bromley who have made a magnificent stand in defence of the library service. This has been one of the longest all out, indefinite strikes of recent times and serves as an example to workers across the country preparing to fight the latest onslaught of council cuts.

Kasab also made an important point with national resonance:

Bromley council is at the forefront of implementing Tory cuts which is why this dispute is so important. We have come away with an agreement which protects jobs and ensures that our members are paid what they are owed. That is an achievement that every one of our members can be proud of.

Nothing to see here…

But GLL’s response to the union’s victory was odd. It appeared to try and downplay the workers’ victory. Its national libraries director Diana Edmonds told News Shopper:

Times change and libraries need to change with the times to make sure customers can access the services they want and need in a 21st Century library.

In 2020 we will be focusing on enhancing and improving the customer experience, freeing up staff to spend more time helping library users get the most out of their visit.

So, GLL is making sure libraries “change with the times”. Nothing to do with one of the longest strikes in recent times, naturally.

Against a backdrop of the government slashing library services, this is an important win. As the Mirror reported, the Tories have “axed” around 10m books from libraries. But Bromley Unite has shown what can be done to resist cuts. If people stand firm and get the public on their side, then anything is possible. It’s also an important lesson in how trade unions and workers should approach the next few years under a Tory government.