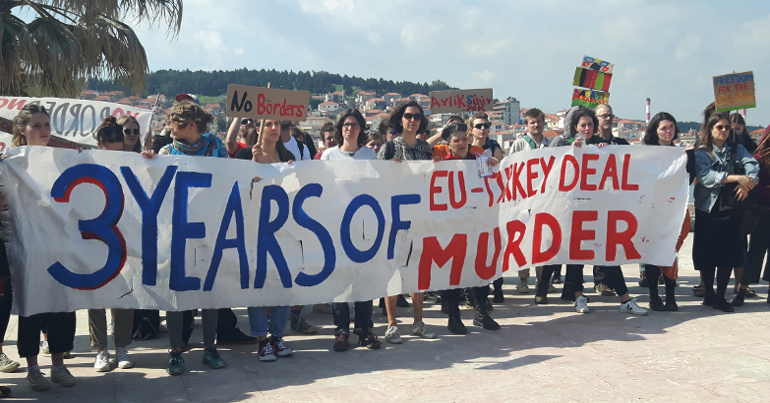 This week marks the third anniversary of the EU-Turkey deal, which has left thousands of refugees stranded on Greece’s ‘prison‘ islands. And 25 human rights organisations say EU policy has had “disastrous consequences on refugees’ rights”.

The deal was agreed in 2016 in order to deter people from fleeing to Europe via Turkey. In theory, Greece can deport all ‘irregular migrants’ back to Turkey. But thousands of people are still making the treacherous journey to Greece. More than 6,500 have arrived so far in 2019, with boats landing on Greek islands almost daily. On 21 March alone, Aegean Boat Report tweeted that:

Two boat have so far arrived on the Greek island of Lesvos.

Second boat picked up outside the Airport by HCG.
30 people
No further information available.

The deal has meant that people arriving on Greece’s Aegean islands of Lesbos, Samos and Chios are unable to leave again, stuck on what activists call the ‘prison islands’ while their asylum claims are processed.

25 human rights organisations, including Amnesty International and Human Rights Watch, released a statement ahead of the three-year anniversary. They said the deal was “short-sighted, ineffective and dangerous”. They also called on European leaders to:

The policy that traps people on the Greek islands and prevents them from reaching the European mainland has caused a recurrent and endless cycle of overcrowding, substandard living conditions and extremely poor access to services: the European “hotspots” continue to provide accommodation and basic services, such as food and medical assistance, well below minimum standards.

The organisations pointed out that as many as 20,000 asylum seekers were stranded on the Greek islands in 2018.

Meanwhile, activists held demonstrations at the weekend in Athens and Lesbos:

The EU-Turkey deal promised to give refugees a “safe and legal way out of Turkey“. But this hasn’t been the case. And even people with young children continue to risk their lives, paying others to smuggle them on overcrowded dinghies to the Greek islands.

The Canary reported last month about a young girl who was feared drowned at sea. And on 11 March, two bodies were found washed up on Lesbos. Refugee Rescue, which was called to retrieve one of the bodies, said:

Two more lives have been erased by the policies of those attempting to shut the gates on those fleeing wars and destitution. Time and time again, we call out for Safe Passage but receive only empty echoes.

Turkey exploiting the deal for its own ends?

Turkey regularly uses the deal with the EU to its advantage, and continually threatens to end the agreement. By doing this, it has arguably helped to silence European criticism of the Turkish state’s actions, including its alleged war crimes against Kurdish people and its bombing and occupation of Afrin in northern Syria.

While EU countries try their best to keep people out of Europe at all costs, Turkey portrays itself as a saviour, “feeding around 3.5 million refugees” within its borders. 68.5 million people have been displaced worldwide, yet there is little critique in the mainstream media of Europe and Turkey’s role in creating these refugees.

Turkey allegedly played a role in funding and arming Daesh (Isis/Isil) and other extremists in Syria, all while being paid billions as part of the EU-Turkey deal. Meanwhile, UK arms dealers benefited from bombing Iraq and Afghanistan and from meddling in Syria. And at the same time, European politicians and the media continue to scapegoat and demonise refugees, distracting the public from who is really to blame.