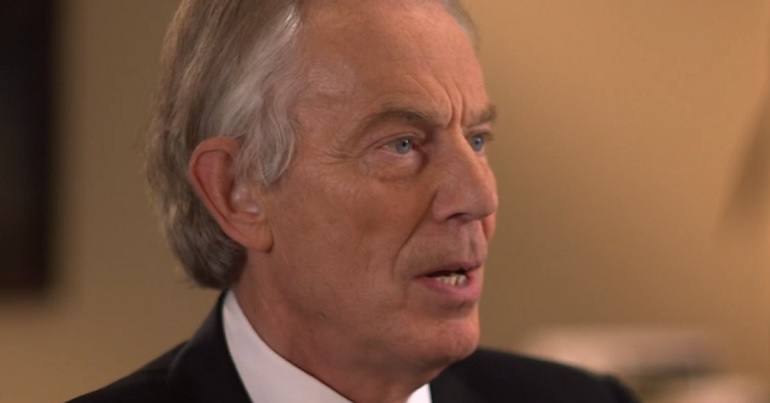 Tony Blair spoke to BBC Newsnight on 19 March. And with one sentence, he seemed to destroy his own argument for a people’s vote on Brexit.

Not exactly a friend of democracy

Since stepping down as prime minister in 2007, Blair has spent much of his time cosying up to dictators. That pursuit (and others) has made him and his family millions. He’s also taken over a million from British taxpayers, via an allowance for public engagements, even though he’s no longer in power.

But he still loves to lecture us all about democracy, of course.

The problem is, it seems he’s not actually a big fan of voters controlling their own destinies. He revealed as much on Newsnight, saying:

Members of parliament owe their constituents their own judgement… They shouldn’t just say to them: ‘well, tell us what you want and we’ll do it’.

Emily Maitlis: You are perceived as being the person that is undermining the democracy of this country

Tony Blair: This government is in this state of dysfunction… and then they turn around and start blaming me

Isn’t democracy supposed to be all about politicians doing what voters instruct them to?

Tony Blair’s ‘New Labour’ faced accusations of being ‘unwilling to listen‘, ignoring members, and distancing itself from trade unions. Journalist John Harris accused it of ‘leaving a vacuum’ in many communities through its out-of-touch attitude and failure to truly address the desperation resulting from decades of industrial decay. This, he said, sparked a “working class revolt” in the form of the 2016 Brexit referendum.

Now, Blair is calling for a people’s vote on Brexit; a second referendum so voters can dictate what happens with Brexit, while apparently ignoring the decision of voters in the first referendum. It’s true: yes/no referendums are problematic (they can rarely represent the wide spectrum of views voters have). But voters can hardly trust people like Blair to respect their decisions when he essentially calls on MPs to ignore those decisions anyway.

Blair and establishment figures like him need to understand that Britain’s lack of meaningful democracy is the biggest problem today. It’s not Brexit or the EU. Most people want public ownership of key industries, for example. That means railways, energy, water, education, and the NHS. People also want Britain’s disastrous interventions abroad to stop (and for us to stop selling arms to war criminals). They’re also sick of public services not getting the funding they need.

Blair didn’t address the above in any significant way when he was PM. Instead, he ignored popular opinion. The disastrous invasion of Iraq was a prime example.

Neither Blair nor the Tories. We deserve real change.

Blair is not the answer to Britain’s problems. Nor is leaving or remaining in the EU. The answer is proper, informed democracy. It’s a system where politicians serve the people; where they actually do what voters instruct them to do. (In the meantime, there are always politicians like Jeremy Corbyn, who represents popular opinion in the UK better than any other party leader has for many, many years.)

True democracy should represent the rainbow of varying views within society. A ‘winner takes all’ system does us all a disservice. The sooner our system truly represents the majority of the country, the better. And the more we fight for it, the sooner it’ll get here.