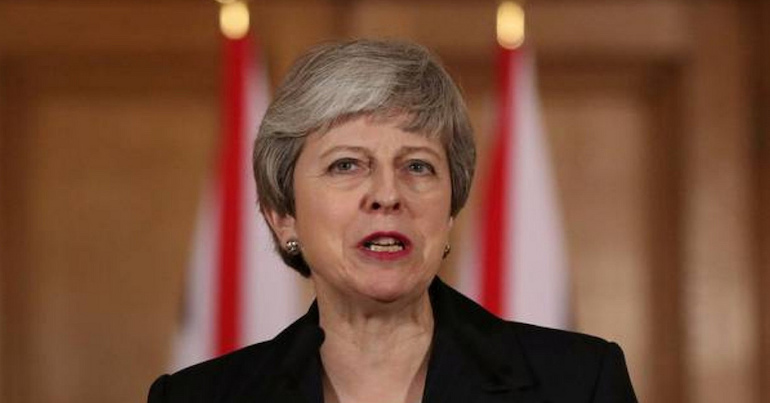 On 20 March, Theresa May said she was “absolutely sure” that the public “have had enough”. Too right; many people are at the end of the line – with her chaos. Over a million people agree and now they’ve well and truly stuck it to May.

A petition calling for May to revoke Article 50 has gone viral. It’s gained over a million signatures – and rising – in less than 24 hours. In fact, so many people wanted to sign, that it broke parliament’s petition website. Revoking Article 50 means the UK would stay in the EU.

There’s a very simple reason for many people: they really have had enough of May’s Brexit chaos. MPs already voted against her Brexit deal. Twice. On 18 March, John Bercow refused to let May send the same deal back for a third vote unless it is “fundamentally different”. Now May’s asked for an extension, but Donald Tusk insists that can only go ahead if MPs back “the withdrawal agreement” (the same one that May seemingly won’t change, MPs voted down, and which apparently can’t go back again without a fundamental change).

Yet, in her latest speech, May insisted, yet again, that the only options are ‘her deal’, ‘no deal’ or staying in the EU. And she blamed everyone but herself.

No wonder the country is confused, baffled and angry. As Jolyon Maugham QC pointed out, parliament’s now voted on pretty much everything except revoking Article 50:

Theresa May has ruled out 'revoke' but we don't live in a dictatorship. Sign so that she listens. https://t.co/rjuiw5NNsE

Lots of people sharing the petition really have had enough of May:

Want Theresa May to hear your voice, oh “tired” public?

In fact, the rate of signing for this parliamentary petition is the ‘highest’ ever:

The rate of signing is the highest the site has ever had to deal with and we have had to make some changes to ensure the site remains stable and open for signatures and new petitions. Thanks for bearing with us.

An issue as big and important as Brexit should not come down to petitions – that said, if you are frustrated that the PM is just not listening, you can sign here. https://t.co/XpZGrFBfhg

Been in touch with Speaker at #Commons
Next week i will, with other MPs, apply for a Debate under Standing Order 24 to push for Commons vote to #RevokeArticle50.
Revocation ends #Brexit in an afternoon & requires only one letter to EU .
Tweet/email your MP to support this.

Had a lot of questions this morning about this petition asking will it be debated? Petitions over 100k get debated. Petitions over 600k need to be urgently debated. #brexit https://t.co/nDM0sYdonR

May’s cliff-edge ultimatum succeeds in sending hundreds of thousands to #RevokeA50 petition, as the scale of her catastrophe becomes impossible to hide. There are NO good Brexits. #StopBrexit https://t.co/NZ07MnmzlC

Many feel that revoking Article 50 offers an instant solution to the chaos:

It doesn't need repeating, it needs correcting. Article 50 can be revoked by the Prime Minister. This madness can be ended tomorrow.

Brexiters had their chance – they blew it. End the wrecking of people's lives and businesses NOW. #RevokeArticle50 https://t.co/Aff2WcuXSQ

Put it this way, if we revoke Article 50, we never have to hear the word 'backstop' ever again #RevokeArticle50

There’s substance behind the aim of this petition. Because six Scottish MPs and English lawyer Maugham took this option to the European Court of Justice in December 2018. As the National reported, it made a “definitive ruling which cannot be appealed”. This stated that the UK can revoke Article 50 and unilaterally stop Brexit.

At the time, SNP MP Alyn Smith called the ruling “dynamite” and said:

A bright light has switched on above an ‘EXIT’ sign.

Of course, this wouldn’t please everyone. Brexit divides the nation. But as the latest polls indicate, there’s now more support for staying in the EU than leaving with May’s deal:

Referendum voting intention between staying in the EU or leaving on the terms negotiated by the government:

So, as this petition gathers signatures, for those who really have had enough, that “bright light” grows brighter by the hour. But whether May will listen to those calling for Article 50 to be revoked is a different matter altogether.