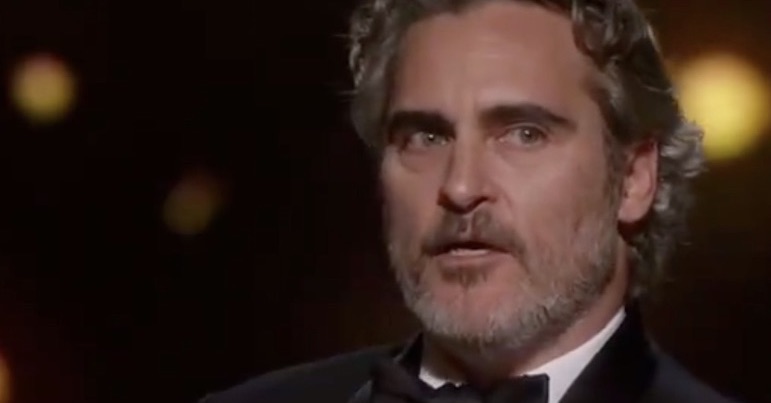 Joaquin Phoenix won the best actor Oscar for his role in Joker. In his acceptance speech, he spoke truth to power, but with love, not anger. His words carry a powerful message that we all need to hear.

“Use our voice for the voiceless”

On receiving the award, Phoenix acknowledged that “the greatest gift” for himself and other actors “is the opportunity to use our voice for the voiceless”.

And that’s exactly what he did, saying:

I’ve been thinking a lot about some of the distressing issues that we are facing collectively. And I think at times we feel, or are made to feel, that we champion different causes. But for me, I see commonality. I think, whether we’re talking about gender inequality, or racism, or queer rights, or indigenous rights, or animal rights, we’re talking about the fight against injustice.

“We’re talking,” Phoenix continued, “about the fight against the belief that one nation, one people, one race, one gender, or one species, has the right to dominate, control and use and exploit another with impunity”.

After winning a Bafta, Phoenix used his platform to speak out against systemic racism and injustice. He’s also championed animal rights and drawn attention to the role of factory farming in the current climate crisis. “I think,” he said after winning the Oscar, “we’ve become very disconnected from the natural world”. As he explained:

many of us, what we’re guilty of, is an egocentric world view, the belief that we’re the centre of the universe. We go into the natural world and we plunder it for its resources. We feel entitled to artificially inseminate a cow and when she gives birth we steal her baby, even though her cries of anguish are unmistakable. And then we take her milk that’s intended for her calf and we put it in our coffee and our cereal.

“Run to the rescue with love and peace will follow”

But rather than simply focussing on the problems, Phoenix acknowledged people’s fears and also offered a message of hope:

I think we fear the idea of personal change, because we think we have to sacrifice something; to give something up. But human beings at our best are so inventive and creative and ingenious. And I think that when we use love and compassion as our guiding principles we can create, develop and implement systems of change that are beneficial to all sentient beings and to the environment.

Phoenix openly acknowledged his own flaws and failings admitting to being “a scoundrel..selfish” and “cruel at times, hard to work with”. But he thanked everyone who’d ever given him “a second chance”. And he extended this into a powerful, message of compassion for everyone, saying:

I think that’s when we’re at our best: when we support each other. Not when we cancel each other out for past mistakes, but when we help each other to grow. When we educate each other, when we guide each other toward redemption. That is the best of humanity.

Fighting back tears, Phoenix spoke of his brother River, who died in 1993:

When he was 17, my brother wrote this lyric. He said: ‘run to the rescue with love and peace will follow’.

I hope people REALLY listen to this speech. Set your ego aside, and let your heart feel what we all know to be true ❤️ #Oscars #JoaquinPhoenix pic.twitter.com/IuHgTfIBsS

There’s no doubt that the Hollywood machine is a multi-billion dollar capitalist industry. But increasingly, A-list stars are using that platform for good.

In 2018, many women used their speeches to highlight gender inequality, sexual violence and to raise awareness of the #MeToo movement. In 2020, the Korean film Parasite won best picture Oscar, the first time any non-English language film has done so. So there’s at least a glimmer of hope that the industry walls of white, male dominance may be crumbling slightly.

What stood out in Phoenix’s speech was a direct attack on power and separation, spoken with open emotion and compassion. To stand any chance of survival with people like Donald Trump and Boris Johnson in office, it’s that energy that we all need.