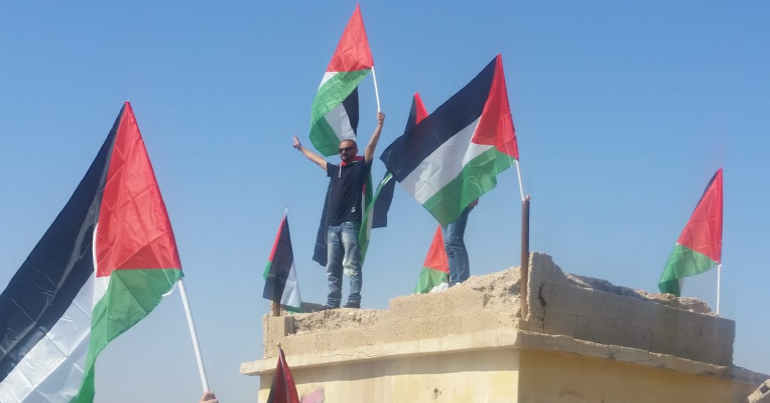 Donald Trump’s ‘plan for resolving the Israeli-Palestinian conflict’ is catastrophic for Palestinians. One major problem is that it gives the green-light to Israeli politicians’ long-held plans to annex the Jordan Valley.

The Jordan Valley, which includes the Dead Sea region, makes up a third of the occupied West Bank. Last year, Israeli prime minister Benjamin Netanyahu threatened to annex the majority of the valley – roughly 23% of the West Bank.

If the plans go ahead, the seizure of the Jordan Valley will be the Israeli state’s biggest land grab since its 1981 annexation of the Syrian Golan Heights.

Israeli politicians have long been planning to annex the valley. In September 2019, The Canary reported:

In 2013, right-wing Israeli politicians voted for a symbolic motion calling for an annexation of the valley to the state of Israel.

The plans for annexation were given a prime ministerial stamp of approval in a press conference by Benjamin Netanyahu in September 2019. He threatened to annex the valley… saying:

Today I’m announcing my intention, with the establishment of the next government, to apply Israeli sovereignty to the Jordan Valley and the northern Dead Sea.

Trump’s proposals show the Israeli state may be moving closer to carrying out its plans. Even before Trump and Netanyahu’s press conference on the plans this week, Israeli politicians have been emboldened to make statements promising to annex the valley.

Before the release of Trump’s plans, the Israeli military moved more troops into the valley in anticipation.

However, there may be a little more time to oppose the proposals, as reports say that the White House has told Netanyahu to take things more slowly.

The Jordan Valley is a fertile area – the bread-basket of the West Bank.

Israel took control of the West Bank, including the Jordan Valley, by military force in 1967. Since then, Israeli colonists have been establishing lucrative agricultural settlements in the valley, taking advantage of the fertile land and oppressed Palestinian workforce. There are now almost 50 Israeli colonies in the Jordan Valley, and nearly 13,000 Israeli settlers along with 65,000 Palestinians.

At the same time, Palestinian communities have been subject to military occupation. Israeli state policies have the intention of pushing Palestinians out of the valley’s rural communities, making more space for the ever-expanding Israeli colonies.

The Israeli annexation plans include the Dead Sea region. It’s an important tourist attraction, a fertile date-growing region, and a lucrative source of minerals used by the cosmetic and chemical industries.

After the military occupation of 1967, Palestinian Bedouin communities were pushed out of the Dead Sea coastal region to make way for Israeli settlers to make a profit from date farming, tourists swimming in the Dead Sea, and the Dead Sea cosmetics industry.

Netanyahu’s annexation plans represent the next phase of Israel’s ethnic cleansing and land grabbing in the area.

The Palestinian communities of the Jordan Valley have been subjected to continual harassment and home demolitions. According to Israeli human rights group B’Tselem:

From January 2013 through September 2017, the military compelled various communities throughout the Jordan Valley to vacate their homes 140 times.

And according to the Shoal Collective:

Israel’s annexation plans will only serve to amplify the Israeli state aggression against the Jordan Valley’s communities.

Palestinians have already mobilised against the planned annexation. According to one commentator on Twitter:

HAPPENING NOW: Palestinians, Israelis, internationals are marching in the Jordan Valley in response to the Israeli/American announcement of annexation and, with it, apartheid. Already one soldier attacked a marcher despite this march not breaking any laws. Life under occupation. pic.twitter.com/9m1IKqVgbv

Demonstrations have been held throughout the West Bank denouncing the Trump peace plan announced last night.

In 2018, the Israeli state’s plan to destroy the Bedouin village of Khan al-Ahmar was averted through a combination of Palestinian grassroots resistance and international pressure.

If the people of the Jordan Valley are to successfully resist the annexation, they will need a massive show of international solidarity. We need to stand with comrades in the Jordan Valley by supporting the right of Palestinian communities to exist there, despite Netanyahu and Trump’s plans.