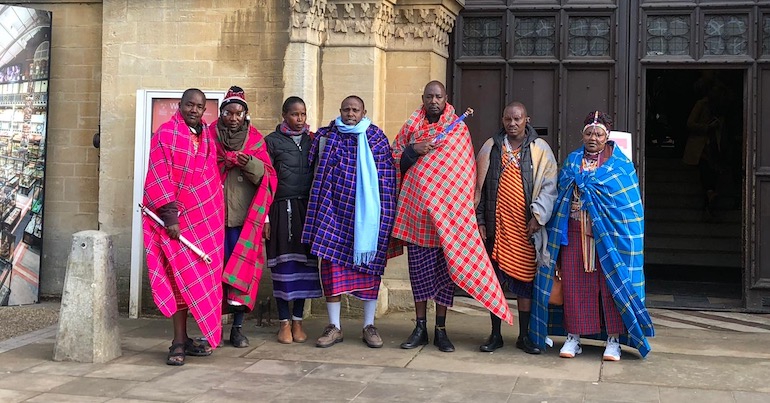 Representatives from Maasai tribes have been visiting museums in the UK this January. The visit was organised as part of a collaborative project called Living Cultures at Oxford’s Pitt Rivers Museum. It forms part of a larger movement to decolonise museums by making them aware of their colonial history and how this can be addressed responsibly.

According to a press release from Living Cultures, the project:

is a partnership between Maasai representatives from Tanzania and Kenya, the Pitt Rivers Museum and InsightShare, an Oxford-based NGO that has worked for over 20 years with indigenous communities to enable them to better represent themselves on critical issues. For all, the partnership allows focus on self-determination and representation.

This visit is the third of its kind since the project began in 2017. Delegates comprise of seven Maasai representatives from Tanzania and Kenya. Over two weeks, they will have visited Pitt Rivers as well as the Museum of Anthropology and Archaeology in Cambridge and London’s Horniman Museum.

Pitt Rivers has been described as “one of the most important ethnological museums in the world”. Maasai activist Samwel Nangiria said while speaking at the museum in 2017:

Seeing the way Maasai sacred objects were displayed in the Pitt Rivers Museum I felt shocked. We are a living culture, not a dead one, and we want to talk to the Museum about how they can change this. I believe that working together with the Pitt Rivers Museum and with our partners at InsightShare we can honour my community and present our real culture in the museum.

Yannick Ndoinyo, junior elder from Loliondo, Tanzania, shared the significance of a sacred artefact during a visit in 2018. He said the artefact was an heirloom that symbolises a father’s death and must be passed down through generations – “this is something that cannot be sold or given”. According to museum records, a colonial administrator had “donated” the artefact in 1904.

The 2020 visit, along with the Living Cultures project, could contribute towards addressing the colonial legacy of British museums. It’s also a step towards providing better representation for indigenous tribes and cultures.