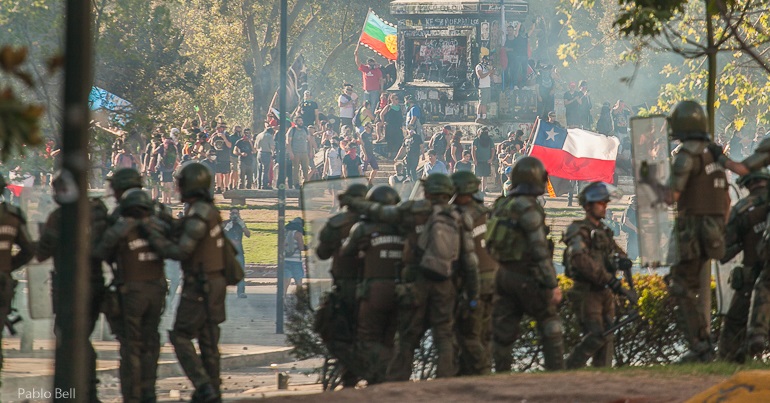 A police vehicle killed Jorge Mora outside a football stadium in Chile on 28 January. He was a football fan, part of the ‘Garra Blanca’ supporters of Colo Colo, one of Chile’s major football teams. He was taking part in a protest outside the football stadium in Santiago when the armoured vehicle smashed him in the back causing fatal injuries. Bystanders who tried to help him were brutally repressed.

Since 18 October 2019, there have been mass protests in Chile which began when students jumped over turnstiles on the underground. They were protesting fare hikes. Chileans tired of extreme inequality and the high cost of living in one of Latin America’s most expensive yet most unequal countries took to the streets to demand social change in continuous demonstrations across the nation.

Despite grave civil and human rights abuses, the UK and US have chosen to back Chile’s hard-right government. Boris Johnson’s government, for example, has just signed a continuity trade deal with Chile, while Donald Trump has tried to blame ‘foreign intervention’ for the social unrest.

Not just a football fan

Mora, 37, was a social leader as well as a football supporter. He was self-educated and, despite not receiving formal training, was a highly respected communications advisor to grassroots activist groups pushing for equality in Chile.

A source close to Jorge, who wishes to remain anonymous for fear of reprisal, told The Canary:

The killing of Jorge happened within the context of a policy of systematic repression in Chile designed to cause terror and silence dissidence, to stop the development of demands for social and economic justice. His killing is significant not just within the sporting dimension, but the socio-political one too.

Another day, another life cut short.

How many more deaths will there be before the Carabineros accept that they must change?

The systemic repression of football fans has its roots in a law called the ‘safe stadium law’ (Ley Estadio Seguro). It was implemented during current president Sebastián Piñera’s first presidency in 2011. It granted police further powers of arrest and vigilance over football supporters.

Flags, drums, and political expression is prohibited, in effect outlawing freedom of expression. And clubs that fail to rein in their fans can face heavy sanctions. Fans, meanwhile, can face bans and even prison.

Mora’s case is one of over 30 killings at the hands of Chilean special forces since social unrest began. Protests surrounding his death were also heavily repressed by armed police, who fired a gas canister directly at the head of a mourner, 24-year-old Ariel Moreno. He died from his injuries soon after. To date, the Chilean police are facing 30 lawsuits and have arrested over 10,000 people in connection with the social uprising.

Our source in Chile told The Canary:

Jorge’s friends and families are combining forces to demand justice for him. We believe that the perpetrator should provide just compensation for the crime committed. The judge involved in this case, Andrea Acevedo, has been partial when dealing with those engaged in the struggle for a more just Chile. As far as we are concerned, Jorge was killed twice over: once by the killer and secondly by the judge who reduced his character to a simple football fan in order to justify the actions of the police.

Observers from Human Rights Watch, the United Nations, and Amnesty International have concluded that Chile’s special forces have systematically spread terror in the wider population.