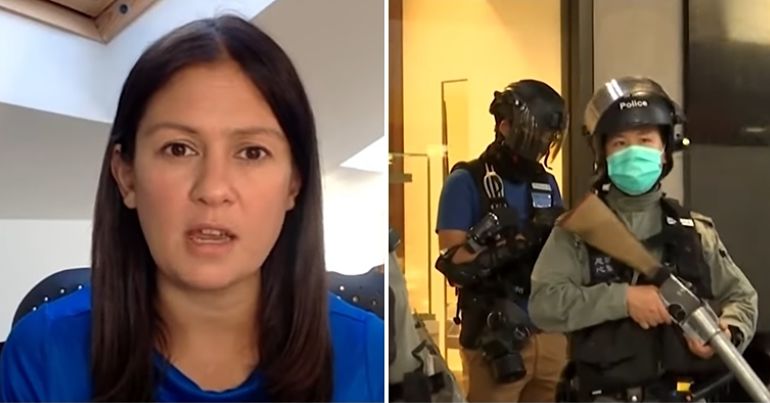 Shadow foreign secretary Lisa Nandy came off as very neo-colonial following her recent comments on Hong Kong. So much so that you’d probably need reminding she’s chair of Labour Friends of Palestine and the Middle East – even if that position’s been compromised by her acceptance of funding from the pro-Israel lobby.

But from another perspective, her comments are perfectly aligned to Labour Party leader Keir Starmer’s pathetic approach to opposition. An ‘opposition’ front bench that refuses to oppose the austerity-driven Tory government that looks on as thousands in the UK die from coronavirus (Covid-19). An ‘opposition’ front bench that won’t speak out even when its own MPs are appalled by his stance on the Cummings scandal.

In interviews over the last nine days, Nandy’s been calling for the UK to take a tougher stance on China and the changes it’s introducing in Hong Kong. Because, according to Nandy, “Britain has a particular responsibility in relation to Hong Kong given our history there” which she noted elsewhere that we “handed over” to China.

Nandy is of course right. The UK has a history in Hong Kong. But it’s not the one Nandy was keen to wax lyrical about in most of these interviews. She repeated terms like “human rights”, “democracy”, and the “rule of law” ad nauseam. Because, according to Nandy, this is what the UK left Hong Kong with when it handed back the colony to China in 1997.

In an interview on BBC News she said:

we want to see the UK government really step up now.

In a separate interview on Good Morning Britain she called on the government to set up:

Nandy ‘welcomed’ foreign secretary Dominic Raab’s joint statement with Australia, Canada, and the US where they:

reiterate our deep concern regarding Beijing’s decision to impose a national security law in Hong Kong.

And she urged the UK to call:

for concrete measures now, to start to push back on this very aggressive approach by the Chinese government

The problem with Nandy’s narrative is that she attempted to portray the UK as a benevolent guardian of Hong Kong. A defender of human rights and freedom. She began that interview saying the UK “handed over Hong Kong” to China. ‘Handed back’ would have been a more appropriate phrase.

Hong Kong was a UK colony for 156 years until 1997. The UK took Hong Kong following the Opium Wars where the British and French attempted to impose their ‘rule of law’ on local Chinese people. Wars broke out because of the illegal British trade of opium from India to China.

What change is China bringing in?

China is introducing laws in Hong Kong. Lawyer and author Antony Dapiran believes this would give Beijing the power to:

impose whatever it wants on Hong Kong, outside and above Hong Kong’s constitutional, political and legal structure

And people are right to question a major change like this. They also have the right to take to the streets to address this further.

But that doesn’t given foreign powers the right to interfere again in the region just because “they see a challenge in China”. Considering this “challenge” has the potential to translate into justification for military intervention, especially with a country as threatening to Western superpowers as China. As journalist John Pilger said:

Undoubtedly it’s an economic challenge, but it’s not a military challenge. This 19th century view of the world that permeates Washington and has returned to this country, the United Kingdom, has now created a war situation with China.

Calling for a “China strategy”, after positioning the UK as an arbiter of human rights and democracy, therefore isn’t too far from beating neo-imperialist war drums.

In reality, Nandy and Starmer could learn something from the protesters in Hong Kong. Because that’s what opposition actually looks like, yet is unfortunately missing in the UK at present.

Nandy would be better served criticising the human rights record of the Tory government in this very country, or asking her own leader why Labour is backtracking on its commitments to Kashmiri people. It’s not the role of the UK, Australia, Canada or the US, to impose their ‘rule of law’ upon the Chinese people. Not again. And especially not when the UK has a shameful colonial history in China and much further afield.