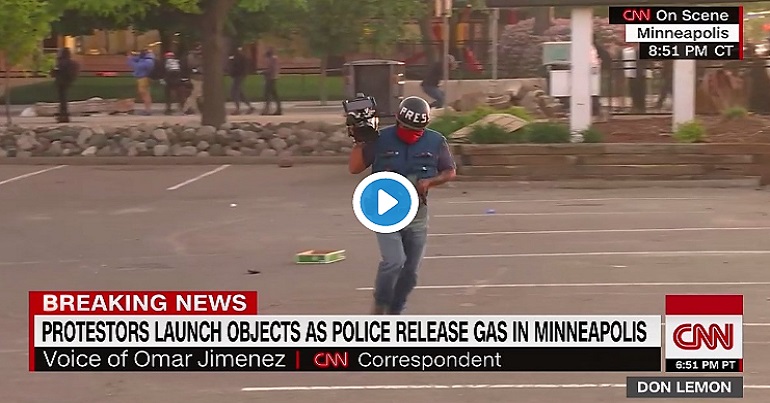 Across the US, people angry at the killing of George Floyd by Minneapolis police officer Derek Chauvin have taken to the streets in protest. It has grown into a broader show of fury at police killings of Black people. The response of the police and the National Guard has caused controversy. But caught up in the US state-sanctioned authoritarian response are the journalists. And police have attacked or threatened over 30 of them.

The Canary reported that across the US the situation in the wake of Floyd’s killing has escalated. Curfews are now in place and police have charged Chauvin with third-degree murder and second-degree manslaughter. But amid this, reporters still have a job to do. And it’s one that’s proving increasingly dangerous.

Katy Byron is a lecturer in journalism. She has been documenting the incidents of police attacking or threatening journalists:

I'm a 3rd gen journalist. I follow many journalists on Twitter from all over the country. This is a running tab of incidents I've seen of police acting aggressively towards newsgathering teams covering #blacklivesmatter #protests nationwide. CC @Poynter @atompkins @TomWJones

For example, this footage from Kentucky went viral:

LIVE ON @wave3news – something I’ve never seen in my career.
An armed officer shooting directly at our reporter @KaitlinRustWAVE and photographer @jbtcardfan during the protests in #Louisville.
My prayers are going out to everyone tonight.
Such a scary situation for all. pic.twitter.com/Ipg0DjFIXu

Minnesota seemed to be a flash point for police violence against journalists.

MSNBC reporters were just almost hit with some sort of explosive device by law enforcement officers in Minneapolis pic.twitter.com/Cy4ayEm5TE

KSTP reporter Ryan Raiche and his crew suffered similar, as did a USA Today contributor. Police shot a Reuters journalist with rubber bullets. They also targeted someone with an actual press helmet on:

A man with a video camera and a PRESS helmet runs after being hit by… something… apparently some sort of pellet fired by police pic.twitter.com/OpH2Q60ry4

And again, this time another group of journalists including one from Vice News:

Police just raided the gas station we were sheltering at. After shouting press multiple times and raising my press card in the air, I was thrown to the ground. Then another cop came up and peppered sprayed me in the face while I was being held down. pic.twitter.com/23EkZIMAFC

CNN journalist Omar Jimenez discussing his live on air police arrest had over one million views:

CNN’s @OmarJimenez and his crew have been released from police custody. He recounts getting arrested and what happened while they were in custody. https://t.co/v3kMq77Oro pic.twitter.com/JoqmwlTc5i

Similar stories emerged from journalists in Kansas, Detroit, multiple ones in Los Angeles and in New York, more in Chicago, more from Kentucky, Washington, some in Denver, Dallas, and Las Vegas,

an update: I am permanently blind in my left eye, and the docs absolutely refuse to let me go back to work for they say six weeks. I’m definitely not allowed to be near smoke or gas.

Also, police have attacked or harassed foreign journalists, including Canadian broadcaster CBC‘s Susan Ormiston; Andrew Buncombe from the UK’s Independent; Kurdish and Japanese journalists; one from Sweden, and Nine News Australia‘s US crew,

As Molly Hennessy-Fiske wrote for the Los Angeles Times:

I’ve covered protests involving police in Ferguson, Mo., Baton Rouge, La., Dallas and Los Angeles. I’ve also covered the U.S. military in war zones, including Iraq and Afghanistan. I have never been fired at by police until tonight.

Black Lives Matter protests after murders by police are not new; one of the most high profile in recent years being that of the police killing of Freddie Gray, resulting in huge protests in Baltimore. But what is new is that a neo-fascist is occupying the White House.

Twitter user Shereen pointed out another problem. And that’s some of the media’s own reporting on the attacks on its own journalists:

appallingly transparent. clearly it’s not just about things being “allegations” because all of these incidents just happened and haven’t been thoroughly investigated. whoever wrote that tweet just doesn’t want to name the police as enactors of violence.

CNN did similar – framing what is clear as ‘appeared’ and making the vehicle the offender, not the police officer driving it:

New York police are investigating after a video appears to show an NYPD vehicle plowing through a crowd on Saturday during a protest over the death of George Floyd https://t.co/EBvK8z9F6F

Reuters covered the shooting by police of one of its own journalists in the same way: that a rubber bullet did it, not the officer in charge of the gun. It also framed the attack as almost an accident because the police were ‘dispersing protesters’:

Herein lies the problem. While on-the-ground journalists are doing their jobs in the face of adversity, the same rules still apply to the machinery of corporate media. That is, frame Black people and protesters as the problem and the police as merely trying to do their jobs.

This is not the fault of the reporters on the front line. It is back to Noam Chomsky’s theory of manufacturing consent, and the five filters of the corporate media. As he wrote in 1988:

The mass media serve as a system for communicating messages and symbols to the general populace. It is their function to amuse, entertain, and inform, and to inculcate individuals with the values, beliefs, and codes of behavior that will integrate them into the institutional structures of the larger society.

In other words, the corporate media can’t be seen to be promoting anti-police narratives. And as Chomsky concluded:

a propaganda approach to media coverage suggests a systematic and highly political dichotomization in news coverage based on serviceability to important domestic power interests.

Much like the persecution of poor and Black people, little has changed in the corporate media since Chomsky wrote that. While their reporters risk their lives, the powers that be can’t be seen to be being too anti-establishment. Even when police are shooting at their colleagues.