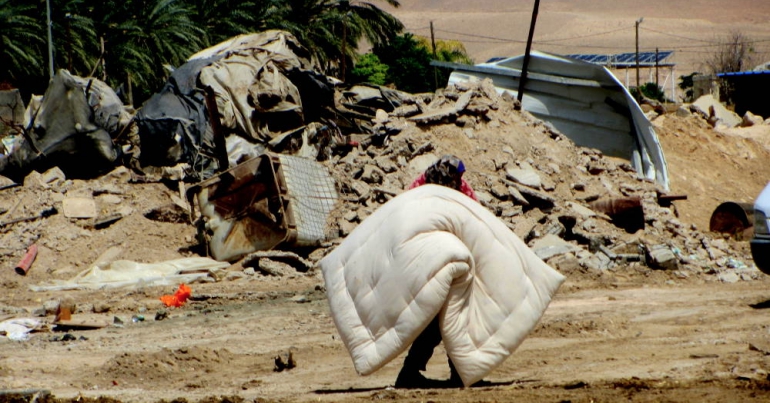 The following article is a guest post from Arthur Goodman, diplomatic and parliamentary officer, Jews for Justice for Palestinians.

Israeli prime minister Benjamin Netanyahu has vowed to annex the Jordan Valley as the first stage of implementing Donald Trump’s so-called “Peace to Prosperity” plan to solve the Israeli-Palestinian conflict. The plan is nothing less than realising the Israeli dream of creating Greater Israel, i.e. Israel in all of British Mandate Palestine, despite its manifest injustice to the Palestinians and illegality in international law.

According to the plan, the Palestinian “state” will merely be six discrete areas – three in the West Bank, Gaza, and two small industrial and agricultural zones near Gaza. They would be connected only by roads, bridges, or tunnels which Israel could close at will. The areas would be completely enclosed inside Israel, except for Gaza’s short border with Egypt and its coastline which Israel will no doubt continue to patrol. They would become the latter-day South African Bantustans.

Israel would annex most of the West Bank, including the Jordan Valley except for the city of Jericho, which would be one of the Bantustans.

International reaction against the plan has been fierce. Sanctions against Israel would be unprecedented, but the same European countries that jointly prevented Netanyahu from demolishing the village of Khan Al-Ahmar in 2018 have hinted at sanctions if he goes ahead with any annexation. Behind the scenes, there has probably been more pressure.

Perhaps most importantly, many Democratic congresspeople in the United States have publicly opposed unilateral annexation of any part of the West Bank. They include some of its most senior members and some of Israel’s hitherto strongest supporters, many of them Jewish. Netanyahu cannot ignore this because he knows the next president might well be the Democrat Joe Biden, and the next Congress might have a Democratic majority.

He has started to retreat by saying he might initially annex only the big settlement blocks near the green line, which would inevitably be part of a land swap if there is ever a deal with the Palestinians. His supporters have hinted at only a symbolic annexation. Even the Trump administration is apparently having cold feet.

But people need to understand what annexation of the Jordan Valley will mean if it does happen. It will compound the injustice already meted out to Palestinians by the long Israeli occupation.

The key is the fertility and size of the valley. It is very fertile land, comprising 160,000 hectares, almost 30% of the West Bank. Israel has, for years, made about 85% of it off-limits to Palestinians by various stratagems, including designating areas as state land, closed military zones, IDF firing zones, municipal jurisdictions of Israeli settlements, or nature reserves. That has prevented Palestinian people from developing the valley, no doubt to reserve it for eventual Israeli development. After annexation, the size of the designated areas would probably be reduced (except, of course, the settlement jurisdictions) and the freed land made available for Israeli cultivation.

The Israeli settlers are already in a privileged position. Some 11,000 live in 37 settlements, with municipal jurisdictions comprising about 15% of the Jordan Valley. They are free to farm the land within their jurisdictions. Meanwhile, some 65,000 Palestinians live in about 50 locations, including shepherding communities, villages and the city of Jericho, comprising nearly 10% of the valley. They are only allowed to cultivate land within that 10%.

Many readers may find it hard to believe that an Israeli government would expel Palestinians, or that Jewish Israelis would want them to. Unfortunately, that attitude is all too common. The Israeli Voice Index survey of September 2019 asked about attitudes to annexation and expulsion. It found that 48% of Jewish Israelis would support annexation of Area C of the West Bank (the Jordan Valley is part of Area C) while only 28% would oppose it.

These results echo the Pew Research survey in March 2016 which found that “most Israeli Jews (79%) say Jews deserve preferential treatment in Israel”. The survey also found that 48% of Israeli Jews agree that “Arabs should be expelled or transferred from Israel”, while 46% disagreed.

Much of the land is owned by Palestinians. The Israeli Absentee Property Law could be used to “legalise” expropriation. The law dates from 1950, when it was used to “legalise” expropriation of the land and property vacated by Palestinians who were expelled by the Zionist forces or fled during the 1947-49 war. Israel has not attempted to use it in the Jordan Valley, or elsewhere in the West Bank, because it has not yet claimed sovereignty there. It would have been too obvious a sleight of hand even for Israeli governments, for whom the appearance of legality is an important part of Israeli propaganda. After annexation, in Israeli eyes, that reason could disappear. The land could be seized by the state, sold to the Jewish National Fund Israel, and then leased to Israeli farmers.

However, there is no way annexation would be recognised by the international community. Even a small annexation would be seen as a repudiation of the two-state solution and a major repudiation of international law. Israel has annexed Palestinian land once before – the annexation of East Jerusalem in 1967. The United Nations Security Council passed resolutions condemning it seven times. The United States either abstained to allow them to pass or voted in favour. However, no action was ever taken against Israel.

There can be no guarantee, but another annexation now might be enough to make several European countries impose sanctions. It appears Netanyahu may not take the risk. His problem for weeks has been that US opinion polls show Donald Trump trailing badly behind the presumptive Democratic candidate, Joe Biden, who has said he will not support annexation.

While Biden would probably not go as far as publicly supporting sanctions, he might well abstain in the United Nations Security Council, allowing it to pass a sanctions resolution. That would build on Resolution 2334, passed in December 2016, which condemned settlements as a flagrant violation of international law. Former president Obama allowed 2334 to pass in the last days of his administration by abstaining. It would be a fitting rebuke to Trump and Netanyahu for Biden, Obama’s vice president, to abstain again in order to allow it to be used to finally impose sanctions on Israel.

Netanyahu will probably now find reasons to wait for the US election before doing anything. If Trump wins, he may take the risk of annexing. If Biden wins, he may not.