Nigerian government officially disbands notorious police unit, but the fight against police brutality is far from over - The Canary 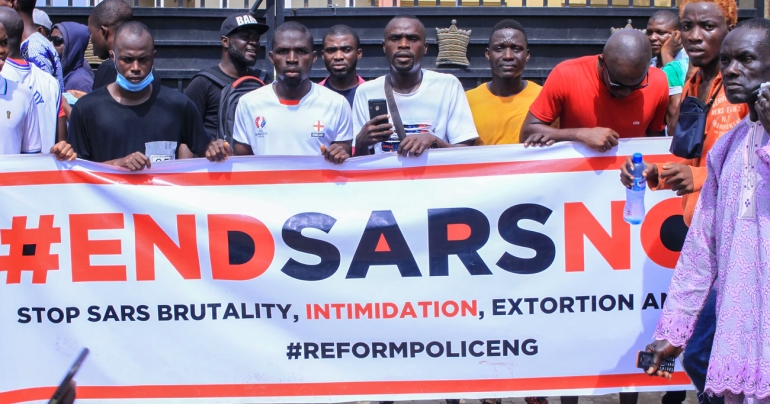 The Special Anti-Robbery Squad (SARS) is a unit of the Nigerian Police Force. Over the years, evidence has mounted of SARS units unlawfully arresting and detaining young people across the country. That evidence includes accounts of kidnapping, extrajudicial executions, stealing property and extorting money.

Since 2016, Amnesty International has documented at least 82 cases of torture, ill-treatment and extrajudicial executions by SARS. In a report published in June 2020, Amnesty found that:

[T]orture is a routine and systemic part of police investigation in SARS; that many SARS stations use designated ‘torture chambers’ – special interrogation rooms commonly used for torturing suspects.

In spite of all the evidence, the Nigerian government has failed to take action.

On 8 October, young people took to the streets of Lagos to protest against SARS, injustice and police brutality. Protesters called on the Nigerian government to disband SARS, reform the country’s police force, and bring corrupt officers to justice. The protests were sparked by a graphic video of a man being shot by police in Lagos, as well as young Nigerians sharing their experiences of police brutality at the hands of SARS across social media. Following this, protesters gathered in cities across Nigeria, as well as the UK, the US and Canada.

In Nigeria, reports of police harassing, arresting and brutalising protesters came to a head when a young Nigerian, Jimoh Isiaq was shot and killed by police at an #EndSARS protest on 10 October – though officers deny the allegation. Seven others were injured.

On 11 October, the office of the President announced that SARS was officially dissolved with immediate effect. This was followed by a press conference with Nigeria’s inspector general of police, Mohammed Adamu.

While the dissolution of SARS may appear to be a victory for protesters, all SARS officers will be redeployed to other units, and a “new policing arrangement” is being created to replace the unit. Many social media users expressed cynicism that corrupt SARS officers will be held to account.

Amnesty International Nigeria made a statement in response to Adamu’s announcement, saying that disbanding SARS:

falls short of demands for accountability and justice for abuses committed by the unit and the police in general. Disbanding SARS must be supported by addressing the underlying issues that has allowed impunity to thrive.

Peaceful protests continue across Nigeria and worldwide, calling for the release of arrested protesters, justice for the victims of police brutality, the establishment of an independent body to oversee the investigation and the prosecution of officers who have been accused of human rights violations. In addition, campaigners are pushing for psychological examinations and retraining for former SARS officers before the police force redeploys them.

While the current situation in Nigeria is unclear, one thing is for certain: the Nigerian people’s fight for justice is far from over.