Socialist candidate leads in Ecuador elections, but run-off vote could mean a return to austerity - Canary 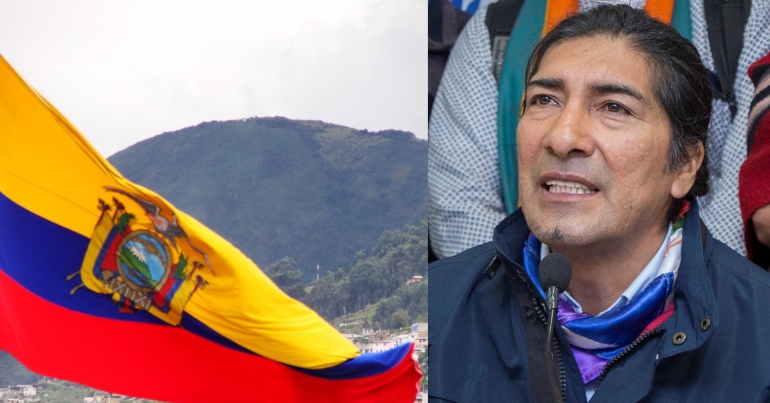 Ecuador’s election finished without a decisive winner and is therefore set to go to a run-off between the candidates with the top two vote tallies. But who those two candidates will be is not yet clear. In a surprise upset, the center-right candidate failed to win a comfortable second-place showing and is neck-and-neck with an insurgent indigenous candidate who ran on an ‘eco-socialist’ platform.

The result is therefore a decisive and unequivocal rejection of neoliberal austerity imposed by former president Lenin Moreno. But some serious questions surround the credibility of the self-described ‘eco-socialist’ candidate. Progressive journalists have pointed out that his candidacy might be a trojan horse to implement sinister reactionary policies through the backdoor.

An endorsement of a return to the ‘Citizens Revolution’

On 7 February, Ecuadorians went to the polls for the 2021 presidential elections. For most of the campaign, the frontrunners were socialist candidate Andrés Arauz and right-wing banker Guillermo Lasso. Despite being eligible given Ecuador’s two-term limit, incumbent president Lenin Moreno decided against standing following plummeting approval ratings, which dipped as low as 7% toward the end of his presidency. Moreno was elected as a socialist and protégé of former president Rafael Correa but pivoted heavily to the right once in office. His decision to reimpose austerity via a deal with the International Monetary Fund led to mass protests in 2019.

Andres Arauz, a 36-year-old economist, stood on a platform promising to rollback Moreno’s austerity policies and re-establish Correa’s ‘Citizen’s Revolution’ of social investment and progressive reform. His winning of over 32% of the vote is seen as giving a mandate for these policies and also representing a tacit rejection of Moreno’s rule. But under Ecuadorian electoral law a candidate must either win 50% of the vote or over 10% more than the runner up candidate with over 40% of the total in order to win outright in the first round of voting.

Since Arauz failed to reach either of these thresholds he must now face the runner-up candidate in a run-off election. However, the second place is currently contested between Lasso and eco-socialist candidate Yaku Pérez. Pérez trailed Lasso and Arauz in the election but finished with a surprise 20% of the vote in the first round. Both campaigns are now claiming that their candidate finished second as votes continue to be counted.

Certainly, Pérez’s strong showing represents an even more decisive rejection of austerity than had been expected. Pérez is an indigenous Ecuadorian and has a strong support base amongst the South American nation’s historically marginalized indigenous community, which makes up about 25% of the population. His party Pachakutik claims to represent the genuine left-wing alternative to both Lasso and Arauza, and espouses policies including opposition to mining.

But writing in The Grayzone, Ben Norton argues that Pérez’s political record “suggests he is a Trojan horse for the left’s most bitter enemies”. Norton points to his opposition to coronavirus-related support payments and his willingness to sign a free trade deal with the United States. Norton also alleges that his party has received funding from US-government sources including the National Democratic Institute (NDI). Furthermore, Norton says that Pérez even supported a the US-backed coup against Evo Morales in Bolivia in 2019.

Pérez supported his ostensible rival Lasso when the latter was a candidate in the 2017 presidential election. Lasso has seemingly repaid the favor by pledging to support Pérez in the case of a run-off in this year’s election. Therefore, whichever of the two goes on to the run-off, the anti-Arauz vote will be combined and could potentially serve to topple the frontrunner in the second round.

Time for a wake-up call and a rebuilding of bridges

Certainly, indigenous support for Pérez is understandable. Indigenous Ecuadorians have been severely underrepresented in the country’s politics throughout its history. And Correa did let the indigenous community down on some occasions and failed to keep indigenous social movements firmly within his support base coalition. But Pérez’s triumph in the election would not be in the long-term interests of Ecuador’s indigenous people or popular sectors more broadly.

His surprise showing should serve as a wake-up call to Arauz and his party. In order to win the second round, they must learn from the mistakes of the past and rebuild bridges with the indigenous sectors or else risk a continuation of austerity through the backdoor.