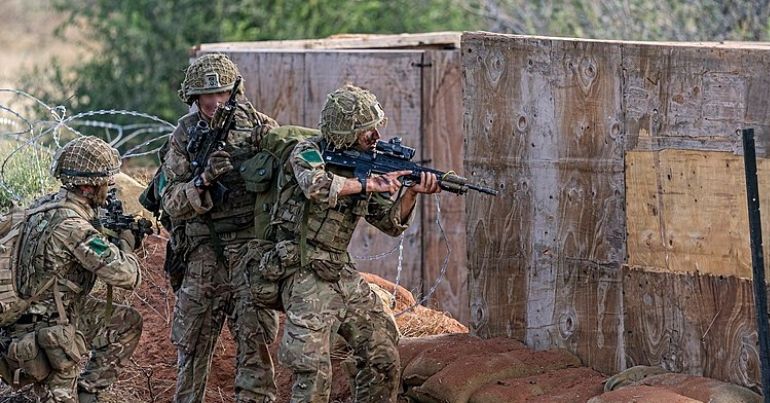 Six British soldiers have now been hospitalised in Kenya amid confusion over an outbreak of coronavirus (Covid-19) among a group of 1,600 troops deployed to the east African nation for a training exercise.

The latest case was reported on 11 February following a week of troubling leaks about a military exercise which had gone ahead despite the risk of spreading the virus internationally.

Some British soldiers in Kenya, who had arrived for training exercises, have been placed in isolation after having tested positive for COVID-19, the UK said pic.twitter.com/JEuEXtOY4y

Kenya, a former UK colony, continues to host the British military on a permanent basis, with the UK military population growing by thousands during large-scale training exercises.

It’s been reported that over 300 troops from the Mercian battlegroup, which includes two full infantry battalions, have been held in isolation. Some have reportedly been forced to bivouac inside in Nanuki camp – a staging ground between the capital Nairobi and the vast training areas used by the military.

Local press has reported that Kenyan workers employed by the military have been sent home on full pay until the crisis is over.

The troops reportedly started to arrived in January to take part in Askari Storm, a regular exercise which been halted since the pandemic hit the UK in early 2020. Despite the confirmed cases, which officially stand at 11, a further 150 troops are said to have flown into the country on 8 January.

The military claims that strict anti-coronavirus measures are in place. However, Sky reported that anonymous members of the battlegroup rejected this:

claims by the Ministry of Defence that the soldiers are having their temperatures taken three times a day have been dismissed as “a total lie” by troops on the ground.

“It’s chaos,” one soldier said. Another described the handling of the situation by senior officers as “a clusterf**k”

The revelations raise concerns that the deployment may have brought UK strains of coronavirus to Kenya.

According to a report in the Independent from 28 January, Kenya defied early predictions that African nations would be overwhelmed by the pandemic. Dr Betty Addero Radier, head of the country’s tourist board, told the paper they had locked down the country effectively during the outbreak:

Kenya was one of the first countries to close our entire air space, and it remained closed until mid August.

Kenya’s response has been swift and practical. The perception [in the West] might be that ‘Africa has suffered a lot of diseases and knows the repercussions’, but really the interventions made by our government have served us in good stead.

There is a mindset in the Western world that says whenever anything happens, Africa is going to be the hardest hit. But Africa has been able to prove this wrong. What’s happening in the UK is shocking. It sounds that as if there is a lot of uncertainty as the pandemic evolves and that there is no plan.

The Mercians are based in barracks in the Midlands, North-West and South of the England, and the other units which make up the battlegroup are from around the UK. The latest hospitalization comes as a leading scientist has warned that the Kent strain of coronavirus, with its higher transmissibility, could become one of the most dominant globally.