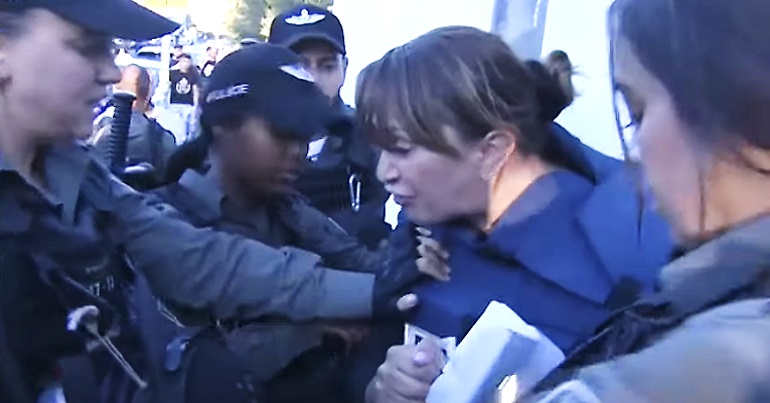 On Saturday 5 June, Israeli security forces “assaulted” and then arrested a prominent Al Jazeera journalist. The media outlet has condemned her treatment, accusing Israeli forces of ‘violating all international conventions’. And the incident comes in a long line of the occupying force’s abuse of journalists.

Al Jazeera reported that its journalist:

Givara Budeiri was arrested in a brutal manner by Israeli occupation forces while covering demonstrations in the occupied East Jerusalem neighbourhood of Sheikh Jarrah.

The outlet noted that:

Another video of Israeli soldiers arresting and assaulting an Al Jazeera correspondent, for doing her job. pic.twitter.com/W6VTXpjWnb

Budeiri was reporting on protests over Israel’s planned eviction of Palestinians from Sheikh Jarrah in the occupied territories. She said that Israeli security forces:

came from everywhere, I don’t know why, they kicked me to the wall

They arrested Budeiri then released her several hours later. Israel forces have told her she cannot go back to Sheikh Jarrah for 15 days. All this is despite the journalist holding an official Israeli-issued press pass. Al Jazeera‘s director general said:

Israeli forces clamping down on journalists is an ongoing tactic. For example, in May its military destroyed a building in Gaza that was used by the Associated Press (AP) and other media:

Israel’s persecution has been particularly stark towards journalists reporting on the situation in Sheikh Jarrah.

As The Canary previously reported, at the start of June Israeli security forces were detaining 13 Palestinian journalists, some following the violence in May. Reporters Without Borders has been monitoring the situation in Gaza and the occupied territories. It said that:

Al Jazeera took the story further. It reported that Israeli security forces released two Palestinian journalists only to then put them under house arrest. Like Budeiri, they had been reporting on the protests in Sheikh Jarrah. An Israeli judge ordered that these two journalists could not communicate for 15 days.

It appears as though Israeli forces are actively trying to stop reporting on the situation in Sheikh Jarrah. Moreover, there was international outcry about Israel’s most recent assault on Gaza. Its forces killed at least 247 Palestinians, including 66 children, in 11 days. So it seems the state of Israel is growing increasingly concerned that the world is watching its actions. And it appears to be actively trying to now prevent media coverage.

Budeiri and other journalists’ arrests are symptomatic of the Israeli state’s apartheid occupation. As Jareer Kassis said on Twitter:

Not just any journalist. Givara Budeiri is a veteran reporter known to an entire generation, born in Jerusalem long before this apartheid-enforcing officer was. Therein lies a symbol of colonization: the humiliation of being oppressed by someone your kids’ age or even younger. https://t.co/KNv8rcUYJZ

Meanwhile, Israeli media reported on Budeiri’s arrest from a different angle. The right-wing Times of Israel pushed the Israeli security forces narrative that they arrested her for “assaulting” them. But the paper did give Budeiri’s side of the argument.

So, not only are Israeli forces actively silencing journalists, but some of the country’s corporate media is reinforcing this too. The state of Israel has all the signs of apartheid. And Palestinians will see little respite in the coming weeks and months.