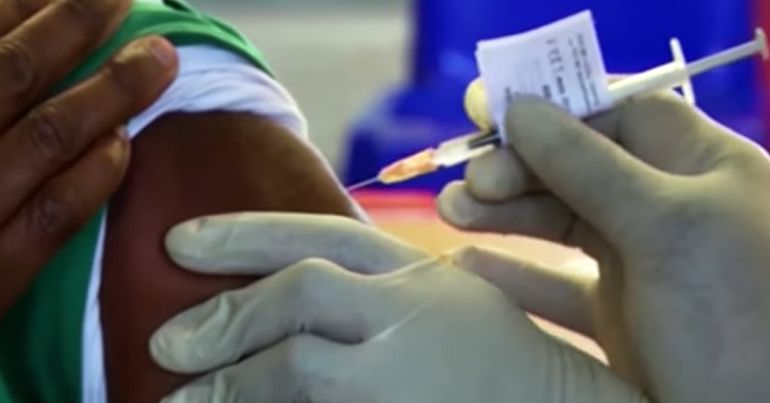 Now that COP26 is more than halfway done, we know what we suspected all along. It really is a “failure and PR event”. But that’s not altogether surprising given at least two of COP26’s four main goals show us just how shaky that ground was to begin with.

The first goal watered down the critical environmental aim of keeping global temperatures below 1.5 degrees. Instead, COP26 pledges to “keep 1.5 degrees within reach” (emphasis added).

And that goal was already on very shaky ground given that some COP26 countries prop up the fossil fuel industry despite declaring climate emergencies.

Then in the run-up to the climate summit, we could see its fourth goal – “Work together to deliver” – falling apart. Because it’s impossible to work together when the UK government kept many would-be delegates away from COP26 and related events. As reported by The Canary, some of those the UK kept from coming to Glasgow were due to speak in person at an event on 9 November called Apartheid Israel and the Climate Crisis are Intertwined. But thanks to UK coronavirus (Covid-19) related restrictions based on nationality, they can only contribute via video link.

At the same time, as pointed out by Labour MP Nadia Whittome, there appeared to be no limit on certain delegates attending in person. Whittome said:

Over 500 fossil fuel lobbyists have been accredited at the climate talks behind me. That’s more delegates than any single country. Companies making billions from climate chaos are inside the negotiating room. While the fences behind me are keeping out people from the countries most impacted .

It's just been exposed that the fossil fuel industry is the largest delegation at #COP26. pic.twitter.com/zdcsRUBMus

Working together by staying apart?

Some delegates from Palestine and other countries in the Global South couldn’t get to Glasgow. The criteria for entry to the UK was difficult and complicated. So while nobody expressly said ‘no’ to them, the multiple barriers placed in their way made it virtually impossible and unaffordable.

Dipti Bhatnagar, a climate justice campaigner from Mozambique, spoke to Democracy Now. She took aim at the UK government’s handling of COP26 and outlined just how important it was for representatives from the Global South to be physically present in Glasgow:

the organization of this COP has been very deliberately done by the U.K. government to be this really exclusionary space, because they know that if the people from the Global South, if the progressive civil society from the Global South are not there to hold people accountable in the halls of power, it’s going to be a lot easier for them to get away with — you know, with carbon markets, with not putting the finance on the table, not putting the emissions reductions on the table.

When writing for Global Justice Now in April 2021, Dorothy Grace Guerrero warned about the Global South’s possible exclusion from COP26. Guerrero accused the UK, US and European governments of inequality in access to vaccines:

We can also see similarities in what is called ‘vaccine apartheid’ and climate apartheid. While the UK, the US, wealthier countries in Europe and other rich nations in the negotiations are way ahead in vaccinating their populations, many developing countries are still waiting to access Covid-19 vaccines. In February, the UN called the vaccine inequality “wildly uneven and unfair” when just 10 countries had administered 75% of all Covid-19 vaccines while 130 nations hadn’t received a single dose. According to the People’s Vaccine Alliance, rich nations are vaccinating one person every second while the majority of the poorest nations are yet to give a single dose.

It’s not all about COP26, though

Outside of the COP26 climate summit charade, there are important events taking place. One of those is the COP26 Coalition People’s Summit. This coalition is:

a UK-based civil society coalition of groups and individuals mobilising around climate justice during COP26.

As mentioned earlier, one of its events took place on 9 November. Palestinian activists were due to speak at this event in person, but that didn’t happen. They decided not to apply to come to the UK following legal advice that said the UK wouldn’t accept their Palestinian vaccine certificates. However, other non-Palestinian, non-UK members on the speaking panel will be there in person.

When The Canary previously spoke with Abeer Butmah about this, she said she wouldn’t attend:

We also spoke with Manal Shqair. She was to speak alongside Butmah in Glasgow as part of a delegation of five representing Palestinian grassroots organisations. Shqair explained that about one month before the summit, as they were preparing their trip to Glasgow, a lawyer told her:

as Palestine is classified as a grey area, having a vaccination is not enough

Shqair says the lawyer also said they may need to quarantine for 10 days upon arrival in the UK. Following a group discussion, they concluded that it was too difficult for them to travel. So they decided not to begin the visa application process. Because even if they had begun it and got all their entry visas, Shqair says they couldn’t have afforded to pay £2,285 for 10 days quarantining in a UK hotel.

What’s the impact of all this?

Shqair said even though they’ll still speak at the event, the fact they can’t be in Glasgow has a huge effect. Because in addition to not meeting those they’d be speaking to, they’re not able attend the protests, workshops, and other seminar events. She believes this all impacts on:

Meeting on Zoom is good, as an alternative, but it’s not enough to build sustainable relations with other movements, to intervene, to give our perspectives in the discussions.

She feels COP is:

yet another space where… these white supremacist systems, like the UK and Israel, try to silence Palestinians and make us invisible.

So I feel that the COP, because it’s now exclusive it’s not inclusive, has become just another space like many other spaces where Israel’s voice is much louder than our voice.

The same would surely go for all the other speakers and nations the UK has effectively excluded from Glasgow.

Shqair was grateful, though, for the international solidarity on display in Glasgow and online. She said they:

received amazing solidarity from the Gastivist Network and young Friends of the Earth Europe.

She also noted the solidarity shown towards Palestine at the Global Day of Action march on 6 November. There was also this light display of solidarity in Glasgow City centre:

The entire Palestine civil society Delegation got refused their visas for #COP26.

Help us make sure their voices are not silenced.

“Fighting for climate justice is at the heart of the Palestinian struggle against Israel’s settler colonial and apartheid structure.” pic.twitter.com/R11lxtbg3V

It should be noted they didn’t apply for visas. But this was due to the fact that until 4 October Palestine had been on the UK’s amber list which would have meant – given the fact the UK didn’t recognise the Palestinian vaccine at that time – spending 10 days in quarantine in  UK hotel at a cost of £2,285 each.

So on that basis and given the time and expense involved in applying for a visa, they decided against it until the UK Covid entry situation was clear.

Others started tweeting #WhoIsMissing in support:

Israel's apartheid policies over Indigenous Palestinians means those most affected by the climate chaos were prevented from travelling to #COP26.

The ​#WhoIsMissing campaign profiles the Palestinian delegation who were refused visas.

Shqair believes this support did help, in some way, to mitigate the attempts to silence them.

Pardon the clichéd pun… but it really is a COP out!

While the decision to place such restrictions on Palestinians and others from the Global South was a UK Tory government decision, it underlines how handcuffed summits like this can be. If the rules of the country the summit happens to be in blocks certain nationalities from attending, then the summit has failed.

And when you consider it excluded people from the very countries suffering the most from climate collapse, it means the climate debate, thanks to this Tory government, has descended into farce.