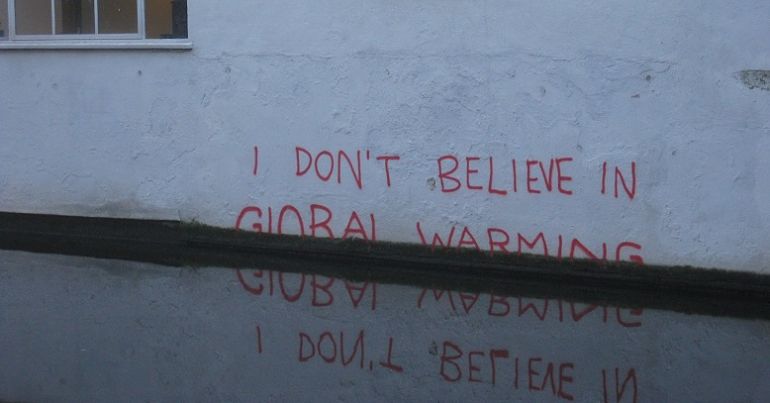 One of the greatest challenges facing humanity right now is the climate emergency. Experts say we’re running out of time, and we’ve only got a matter of years to put things right. But that stark reality hasn’t stopped the climate change denying fossil fuel industry’s attempts, over a long number of years, to prevent real climate action. And this drive of climate change denial is, in part at least, being fuelled by the far-right.

Andreas Malm, Line Skovlund Larsen, Irma Allen, and George Edwards spoke at the event. Malm told The Canary the ZC is a group of:

scholars, students and activists doing research on the political ecologies of the far right. So how the far right is responding to the climate crisis in particular

They elaborated on their topic with The Canary following their talk. And it’s quite frightening how far right fanatics, with the collaboration of centrists, have poisoned the system and are poisoning our planet.

Former US president Donald Trump is one of many far-right climate change deniers. So too is Brazilian president Jair Bolsonaro and former UKIP and Brexit Party leader Nigel Farage. But climate change denial isn’t confined to these extremists. Because looking at some of the pledges made and the number of fossil fuel delegates at COP26, it could be that this influence on the mainstream means we’re not going as far as we need to.

As part of ZC’s research for their book White Skin Black Fuel, it looked at:

13 parties in Europe and what they’ve said and done about climate and energy, primarily in the past decade. We’ve also looked at the [presidencies] of Trump and Bolsonaro in the US and Brazil

He explained that “former climate denialists like Nigel Farage” are now posing as friends of the environment. Malm believes their agenda is to:

defend the white nation and the privileges that come with that. And they are keen on defending those privileges against the challenge from the climate justice movement.

And even though Farage doesn’t hold office and Trump is no longer president, Malm says far-right policies have migrated into the centre. He highlighted that when the nationalist Danish People’s Party started losing popularity, its policies found a home with the Social Democrats. He said it’s a similar situation in Sweden.

Does the far-right influence climate politics?

Edwards researches the UK and Germany where he looks at the intersection of the far right and climate politics. He said there’s a commonly held perception that the far-right are:

However, Edwards says there’s a far closer connection between the fossil fuel industry and nationalism as a political force. ZC tries to highlight that this is a bigger problem than people may imagine and that “there is a coincidence of interests between” the far right and climate politics. He claims in Poland and Norway there’s:

do not dare to make any cuts whatsoever in our giant meat production, cement production… so they accept the science but the action is not taken

Denmark and the world are facing a genuinely difficult situation. A new situation. Record numbers of refugees are on the move,

Climate change will force more people to relocate. And add to that the fact that the population of Africa is expected to double by about 2050.

A hierarchy of needs?

What drives the far-right to exert the influence they do over the climate crisis debate is difficult to fully answer. It may be, as Malm said earlier, that they’re defending the privileges of the “white nation”. Edwards believes it’s extremely difficult to say, but it could be that:

there is this extremely deep faith in the system as it is, to probably overcome the problems at hand. I don’t think there is a direct acceptance that this is a long problem… I think there’s a calculation of what this would be perhaps in the UK – it’s going to be relatively untouched by the worst aspects of the climate crisis – and I think there is this hierarchy of value attached to people’s lives around the planet.

As ZC’s research highlights, certain centrist political parties have effectively moved to the right. It highlights those parties are no longer fit for purpose. So they need to be upfront with voters and declare their true political leanings before they get into power. And because it’s either optimistic or naive to expect that kind of openness from mainstream politicians, it falls on the community to push harder for real action on the crisis. We literally have fuck all time.