While indigenous tribes suffer, Bolsonaro is working with corporations to exploit the Amazon rainforest - Canary 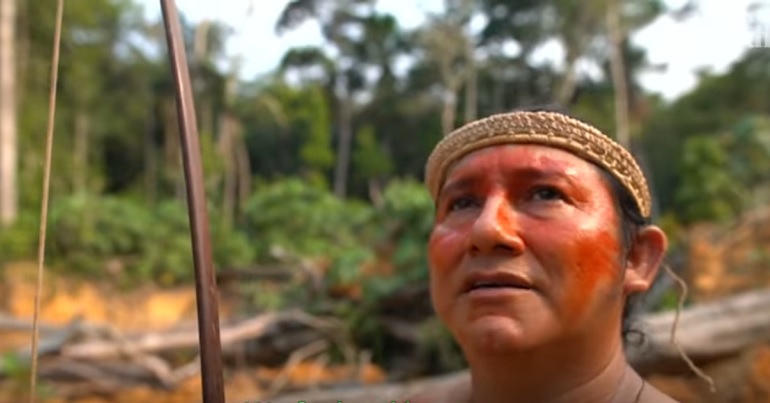 The Canary recently reported on the destruction in the Amazon rainforest due to ongoing and devastating forest fires. Brazil’s right-wing president Jair Bolsonaro has placed blame for the fires, which have now been raging for several weeks, on local farmers and NGOs.

Bolsonaro’s reported business links show long-term plans to exploit the rainforest for its resources. And what’s even worse is the impact on indigenous tribes, who now face what has been described as genocide.

The statement goes on to say that “European and North American businesses that finance and source from Brazilian businesses” are playing a major role in the current environmental crisis.

In May this year, Amnesty International published a report emphasising the need to protect indigenous Amazonian tribes from illegal intrusion. Al Jazeera recently shared a video online of indigenous leader Alessandra Munduruku, speaking in the capital Brasilia in May of this year. In an impassioned speech defending indigenous rights, Munduruku says:

[They say] the Indian is incapable, the Indian is an animal. We are not animals, the animal is the one who lives here and is taking our rights away.

[…] I want to tell Bolsonaro […]: Respect our life, respect our territory, respect our rights, respect our ancestors. We have resisted for 519 years, and even if you cut out our root, it will be buried there.

The Amazon was in danger long before the fire that’s ravaged the rainforest for three weeks. Indigenous communities in Brazil have been struggling with illegal mining, logging, and the loss of protected status for indigenous lands. pic.twitter.com/nTzwkPz53m

Moreover, on 13 August indigenous women leaders marched in Brasilia to take a stand against Bolsonaro’s policies. Sonia Guajajar from the Guajajara Tribe told AJ Plus:

We have no doubts that Bolsonaro’s government has genocidal politics. He’s changing legislation, loosening restrictions, authorising mining and deforestation. It’s not just the forest that’s in danger, it’s our own lives.

The video goes on to say that “Indigenous leaders receive death threats,” with one reportedly killed by miners in July of this year.

Deforestation in the Brazilian Amazon has increased 67% since President Jair Bolsonaro came into power. These Indigenous women are taking a stand. pic.twitter.com/QgW1JBZf2Y

Open Democracy has also reported on how the Brazilian government allegedly plans to use hate speech to isolate minorities.

It’s safe to say that local campaigners have been calling attention to Bolsonaro’s destructive, genocidal policies for some time now. Moreover, the impact of the rainforest’s destruction will be global. As indigenous leader Puyr Tembé said: “the air we breathe is the air you breathe. The water we drink is the water you will drink. And if one day it dries up, you won’t have anything.”

So the devastation in the Amazon rainforest affects all of us. And it’s important that we rally behind indigenous tribes and help to hold the Brazilian president to account.