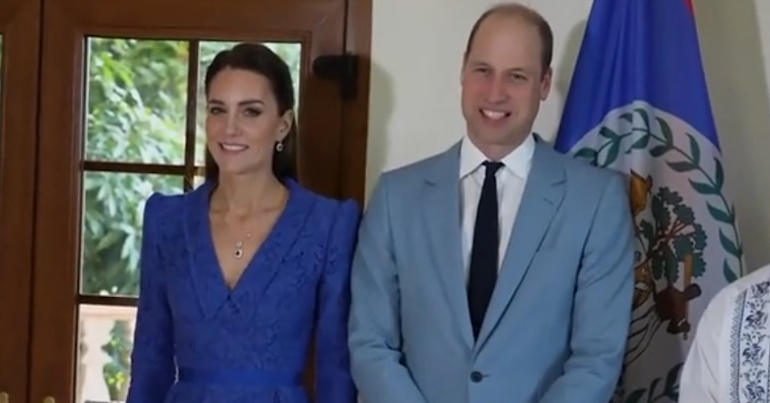 As William and Kate embark on a charm offensive tour of the Caribbean, people are taking to the streets and social media to let them know they’re not welcome.

The tour to commemorate the Queen’s Platinum Jubilee began on 19 March. Their first stop is Belize, and locals have not let the visit go unchallenged. In a victory for the people – and embarrassingly for the Royals – a visit to Indian Creek village was hastily cancelled due to protests. William and Kate had been due to visit a cacao farm owned by Flora and Fauna International (FFI), of which the prince is a patron. But residents held up signs saying “Colonial legacy of theft continues” because FFI continues to prevent the villagers from accessing land. The villagers said they felt “disrespected”, as they weren’t even told about the impending visit.

Britain should apologise for “crimes against humanity”

Next on William and Kate’s tour is Jamaica. People plan to take to the streets in the capital of Kingston too. As race correspondent Nadine White tweets:

NEW: A protest is due to take place in #Jamaica on Tuesday as Prince William & Kate visit the country during their royal tour. Organisers have also penned an open letter to the monarchy calling for slavery reparations. More on this soon. #Jamaica60 #AdvocatesNetwork pic.twitter.com/JUYSk1MUTv

August will see the island’s 60th anniversary of independence from British colonial rule. Inevitably, the Jamaican people are questioning how a nation can possibly decolonise if queen Elizabeth is still head of state. So, for the royals, the visit to Jamaica will be especially important as they use their charm to try to prevent the island from doing what Barbados did in November 2020, when it removed Elizabeth as its head.

We will not participate in your Platinum Jubilee celebration!

We see no reason to celebrate 70 years of the ascension of your grandmother to the British throne because her leadership, and that of her predecessors, have perpetuated the greatest human rights tragedy in the history of humankind.

We are of the view that an apology for British crimes against humanity, including but not limited to, the exploitation of the indigenous people of Jamaica, the transatlantic trafficking of Africans, the enslavement of Africans, indentureship and colonialization, is necessary to begin a process of healing, forgiveness, reconciliation and compensation.

Advocates Network has laid out 60 reasons why Britain needs to apologise and give reparations to Jamaica. The reasons include “the exploitation of indigenous people”, “capturing their land”, “for human trafficking across the Atlantic Ocean in the transatlantic trade of enslaved peoples”, and for “genocide and massacres”.

The royal tour will finish in the Bahamas. During the course of the visit, we should expect lots of images and videos in the mainstream press, showing the usual white saviourist actions of William and Kate as they pose for photos – decked in all their wealth. All the while they’ll try to persuade these nations that they shouldn’t cut ties with the monarchy.

Over the past year, the royal family has tried to salvage itself after numerous disgraces. We’ve seen Andrew Windsor buying his way out of child sexual assault allegations, while last year’s famous Harry and Meghan interview explicitly pointed out the current racism within the monarchy. The last thing the royals will want is for more commonwealth nations to cut ties with them.

Barbados, Belize, and Jamaica have all showed the royals that they need to go back to where they came from: it’s inevitable that more countries will follow suit.