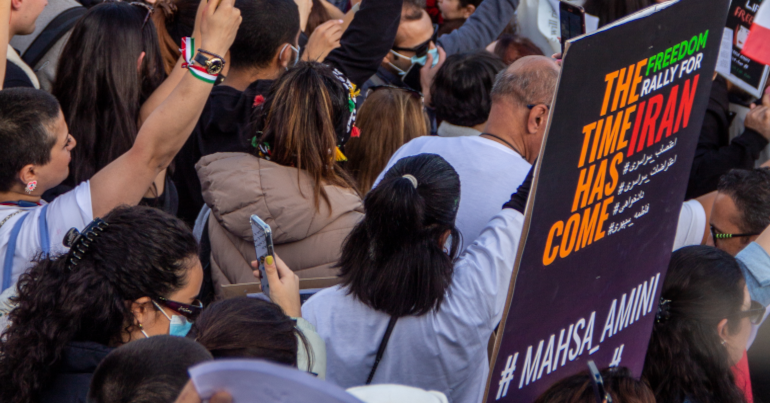 A young woman called Ala has sent a message to the world, from the heart of Iran’s people’s uprising.

Ala spoke to the Çay at the Women’s Front podcast about the ongoing uprising in Iran, which erupted following the murder of Jîna Mahsa Amini on 16 September by the Iranian police. Jîna had been arrested for supposedly not wearing a proper hijab.

Ala is a Kurdish woman from the city of Kirmaşan (or ‘Kermanshah’ in Persian). Kirmaşan is part of Rojhelat, the part of Kurdistan which lies within Iran’s borders.

The Çay at the Women’s Front podcast is broadcast from Rojava Northeast Syria, and asks questions like “What problems do we face on the journey for a free life?” and “What do we learn from the young women and mothers who weave the change of society with their hands?”

It published a twenty-minute message from Ala. You can hear the whole recording here.

Ala explained the significance of the protests:

During the years of my life in Iran I have always witnessed oppression and injustice to people, especially women. I have witnessed many protests, but the protests..of the last month are the longest protests that have taken place in the last 43 years.

She continued, explaining the heavy repression of the movement:

In the past month we have witnessed the killing of many people, including the old and the young – children, men and women. The phenomenon that we are facing is one of the most cruel confrontations, because it is clearly a violation of human rights. And they are trying to force any protesting person to remain silent, be it a child, be it a woman or a man.

It can be forcing them to remain silent by arresting them or by killing them. They are cutting off the internet and other communications… And are trying to silence the voice of Iran’s struggles.

The power of unity and hope

Despite all of this, Ala said:

We are witnessing a strange encouraging and hopeful phenomenon among the people. And that is the power of unity and hope, the force that has caused people not to stop fighting for even one day in the past month.

Ala explained the many ways in which people are joining the struggle:

Today all freedom loving people are political fighters, everyone in the way they can. One [way] is through face-to -face protest and participation in street protest, the other is through strikes and not going to work, the university student by not participating in classes, the school students by defying the singing of the national anthem.

All people are on the battlefield with empty hands, but hearts full of hopes and empathy.

Women are the vanguard of the protests

Ala talked about the importance of women in Iran’s uprising:

The point that distinguishes these protests from other protests is the presence and strong role of women in it, women who have broken the silence for many years and are in the field as the… vanguard and flag bearer of these struggles.

For many years – as a Kurdish woman – I have witnessed the oppression that has been committed against the Kurds, and on the other hand I have witnessed the good thinking behind the Kurdish struggles. Jin, Jiyan Azadi! [Women, Life Freedom!] It is not just a slogan but a thought, a thought that took route in Bakur, Kurdistan [the part of Kurdistan that lies within the borders of Turkey] and now it has spread its roots… and all borders and all the people of the world have heard the words of Kurds and Kurdish women’s struggles.

Ala explained that “Jin Jiyan, Azadi” has “encouraged women of all colours and languages to fight for their rights”. According to Ala:

Women have the main and key role in this uprising, from the very beginning when they killed Jîna Mahsa Amini because of not having proper clothing in their opinion. Until now, women have not vacated the battlefield.

During this time I have witnessed the death of many people, I have shed tears in my heart for each of them. I am saddened by the news of people being arrested, but I will not forget what they had come to the field for, and what they lost their lives for. They died for freedom, to get their rights and others’ rights. And this conveys to me the message that now is the time to stand and fight, not the time to do nothing and cry.

Ala concluded her message by explaining what the people rising up in Iran need from people outside:

The expectation that Iranian people have from people outside of Iran is to be their voice, and to use all their power to boycott this dictatorial system. And they should see these killings, and these child killings and show a serious and effective reaction. Other governments should stop their overt and covert support for the Islamic Republic, and boycott them.

This is a revolution for all the women of the world

Ala encouraged comrades around the world to share the news about the uprising, and to take inspiration from it. She called on us to:

Let other people know about our struggle and inform them about what is happening in Iran, and know that this is a revolution against oppression and for all the women of the world.