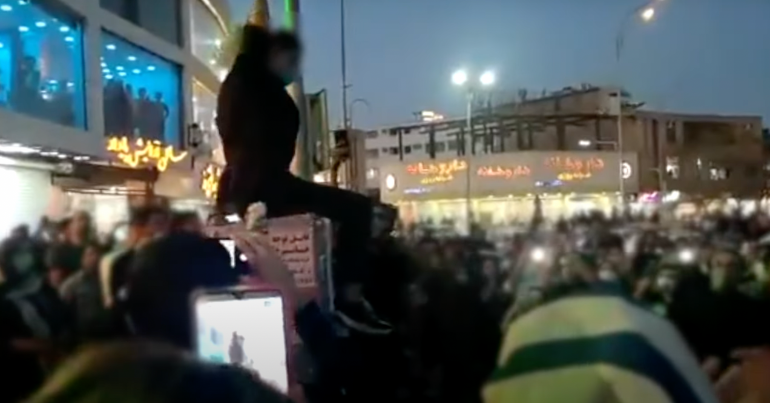 The disturbing death of Mahsa (Jina) Amini, a Kurdish-Iranian at the hands of Iranian police while in custody, for supposedly not observing proper hijab, has rung alarm bells for most activists in Europe and North America. Many have seen images and others have experienced first-hand police brutality. Deaths in detention of Black, brown, migrant, LGBTQ, and disabled people are commonplace.

As we in the UK continue to struggle to end state violence, particularly levelled against working class, racialised, and migrant communities, Iranian women on the ground are bravely fighting state violence and demanding bodily autonomy to dress how they want without state-patriarchal interference. However, like in the UK, the class system in Iran is firmly entrenched within society and is a useful indicator of who will be affected disproportionately by state violence.

While in northern wealthy Tehran women are almost unveiled but still can enjoy their time in expensive shopping malls and restaurants, protected from the law by their money, women in southern parts of Tehran are exposed to police brutality for minor violations of the dress codes.

We must think of how not only gender but also ethnicity and class contributed to Mahsa Amini’s death. Class is a metric that is often ignored in discussions, but it reveals much about who is most impacted by brutality and injustice.

As I see Iranian women fight, and die, while protesting for their bodily autonomy, I also see women, both non-Iranian and those within the Iranian diaspora, attempting to show solidarity. But while these women claim to be in solidarity with the current protests, they’re actually fronting an imperialist feminist position. They view Iranian women as needing to be ‘saved’ by the West. As feminist activist Zillah Eisenstein writes concerning imperial feminism:

[It] is a feminism that operates on behalf of American empire building. It has a history of using the Western canon of “women’s rights” to justify American wars, most recently in Afghanistan and Iraq. Imperial feminism imposes rather than negotiates, it dominates rather than liberates, it declares itself the exceptional arbiter of women’s needs. It operates on behalf of the hierarchies of class across the globe, leaving most women out of the mix.

The notion that Iranian women need ‘saving’ from the West is a decades-old Orientalist idea. It places white saviourism before the safety and humanity of people actually on the frontlines.

For example, leading this imperial feminist brigade is Masih Alinejad. This is someone who has made herself a useful informant to both Western and Iranian diasporic neo-conservatives. Alinejad openly associates with people who want regime change and has cavorted with misogynists like Mike Pompeo.

Recently, The New Yorker presented a glowing review of Alinejad. The outlet framed her as a central instigator who galvanised Iranian women to protest on the streets, due in part to her online campaign My Stealthy Freedom:

The Exiled Dissident Fuelling the Hijab Protests in Iran

Lofty proclamations from fawning Western media that put Alinejad on a pedestal are an insult to Iranian feminists who have fought, and continue to fight, against misogynist laws and policies.

Some of these brave feminists, like Nasrin Sotoudeh, are still in political prisons and under house arrest for their activism. The New Yorker piece on Alinejad also ignores the vibrant Iranian feminist activism of both religious and secular women, who worked together to create in 2006 the One Million Signatures for the Repeal of Discriminatory Laws. This was a campaign that, despite state violence, arrest, and harassment of key feminists like Parvin Ardalan, Sussan Tahmasebi, Shadi Sadr and Mahboubeh Abbasgholizadeh, was instrumental in forging an inclusive Iranian feminism.

The fruits from this campaign are what we are witnessing today among protesters in Iran demanding “optional hijab”, not the eradication of hijab entirely. These protests are demanding that Iranian women, not the state, decide for themselves whether to wear hijab or not. When Iranian women burn their hijab, cut their hair, or eat breakfast in a cafe without hijab on, these actions should not be construed as anti-Islam. Rather, these are acts of poetic civil disobedience after over 40 years of brutality and violence by Iran’s morality police.

While some non-Iranians and diaspora Iranians alike have taken to social media to show images of Iranian women from the 1960s and 70s as the Iran in which they aspire to return to, we must remember that the state-patriarchy and lack of bodily autonomy for women that we see in Iran did not happen solely under the Islamic Republic. In 1936, taking a cue from Mustafa Kemal Atatürk, Reza Shah Pahlavi outlawed the veil in his bid to modernise Iran. However, this decision was not emancipatory. A sizeable number of Iranian women were, conversely, forced back into the home and excluded from public life as a result of this decision.

As Iranian women shout ‘Zan, Zendegi, Azadi’, meaning, “woman, life, freedom”, there are political actors behind the scenes that are manipulating this important moment to install regime change in Iran. These charlatans are monarchists tied to the Pahlavi family and the People’s Mojahedin Organization of Iran (MEK) a cult-Marxist-Iranian political group, funded by the CIA, based in Albania since 2013. Recently in June, former US Vice President Mike Pence visited the MEK base outside of Tirana and stated that he had travelled all the way from his home in Indiana because both he and the MEK support:

the liberation of the Iranian people from decades of tyranny.

We need to be concerned about how both neo-conservatives and political hucksters from the US and beyond will attempt to use the momentum on the streets of Iran for their own political advantage.

Supporting Iranian women at this critical time means calling for an end to US sanctions on Iran. Iranian diasporic feminists from the No Sanctions on Iran campaign have consistently stated that “sanctions are war by another name”. They highlight how the US has used “ordinary Iranians” as collateral damage which is “justified as a means of punishing the Iranian state.”

As the campaign states:

for over a decade, lack of access to medicine and the environmental effects of the sanctions have debilitated the Iranian people and have subjected them to death.

Last year in the New York Times, Iranian feminist Sussan Tahmasebi and Iranian-American researcher, Azadeh Moaveni wrote how US sanctions are further harming Iranian women and limiting their access to employment and higher education. One cannot be for Iranian women at this very time while still espousing a pro-sanctions position.

Lastly, the Iranian government and police must take full responsibility for the death of Mahsa Amini, and of many others who have been killed while protesting for Iranian women’s bodily autonomy. Branding these brave protesters as “rioters”, and inflicting state violence on them, will only escalate tensions.

A panel discussion with Iranian women scholars organised by the AGITATE! editorial collective, which took place on 4 October, provides deeper analysis that is essential listening. The Iranian government must listen to the righteous and justifiable rage of Iranian women. If the government’s disturbing arrogance and outright lies concerning Mahsa Amini’s death continue, this will be what paves the way for its downfall.