Stop and search can't be reformed. It needs to be scrapped entirely. - Canary 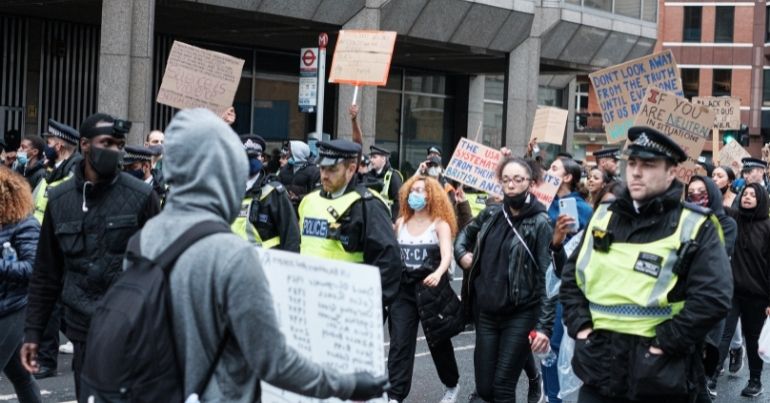 The Independent Office for Police Conduct (IOPC) has published a report in which it urges police in England and Wales to address their disproportionate use of stop and search powers against Black and racially minoritised people.

Published on 20 April, the report sets out recommendations for police to “improve” their use of the power.

But as racialised communities have been saying for decades, they don’t need any more reports or empty promises of reform. Stop and search is an inherently discriminatory practice, especially when carried out by a racist institution. It’s time to scrap the police power once and for all.

Yet another damning report

The report’s findings are all too familiar.

It states that in the year ending March 2021, police in England and Wales were seven times more likely to stop and search Black people than their white counterparts. While avoiding direct blame, the IOPC highlights how racist discrimination and stereotyping can factor in to stop and search.

The report’s findings include that police regularly rely on the smell of cannabis as the sole grounds for a stop. As the IOPC explains, this doesn’t justify a stop and search. It also notes that officers’ “insufficient and poor-quality communication” is a key cause for anxiety and resistance from those being stopped. It adds that officers summarily resort to handcuffing those being searched, rather than working to de-escalate the confrontation.

The report sets out a number case studies exemplifying the police’s discriminatory, excessive, and unjustified use of stop and search powers against Black children and young people. This includes a case in which officers allegedly stopped and searched a Black child more than 60 times over a two year period, leaving him traumatised.

It also highlights other cases, such as an officer punching and kicking a Black child to the ground, having stopped the child for allegedly smelling of cannabis. In another case, an officer handcuffed a “compliant and polite” 12-year-old Black child “within 20 seconds of the officer exiting his police vehicle”.

We know that in 2020 the Met was 19 times more likely to stop and search young Black men than London’s general population. We also know that police use stop and search powers disproportionately against children, making Black youngsters particularly vulnerable to traumatising police harassment and brutality.

The IOPC report’s case studies offer just a snapshot of the routine harassment that racialised children and young people experience at the hands of police every day.

As long as police have the power to stop and search, these disparities – and the trauma of police harassment – will persist.

The report comes while – decades on from the MacPherson Report – the Met continues to dither over whether the force is institutionally racist. A look at only a handful of recent cases will confirm what Met bosses are struggling to articulate.

Indeed, a review in March revealed officers’ humiliating and degrading strip search of Child Q, and police stopped a Black man because he wasn’t “dressed for the climate“. Officers targeted him again days later.

This all sits in the broader context of excessive and disproportionate deaths in police custody and police use of force. Even officers themselves aren’t safe from racism in their ranks, as 90% of Met officers disciplined for internal racism remain active in the force.

Despite the overwhelming evidence that stop and search is discriminatory and doesn’t deter crime, the government seeks to further expand stop and search powers through its authoritarian Police, Crime, Sentencing and Courts Bill.

Stop and search, and policing in general, does not prevent crime. It doesn’t protect communities, and it only serves to traumatise and criminalise the most marginalised people in society.

We must demand an end to the expansion of police powers, including stop and search, set out in the police bill. And we must withdraw consent from harmful and discriminatory policing.

It’s evident that police forces have no intention of halting their excessive and discriminatory use of stop and search powers. Therefore, we must all be equipped to intervene when we see stops occur. Indeed, as members of the public, we have the right to dictate how our communities are policed.

The London Campaign Against Police and State Violence (LCAPSV) has set out guidance for intervening in police stops. And police monitoring organisation StopWatch has created guidance for parents and children, as well as a guide on how to make complaints against the police. Meanwhile, the Network for Police Monitoring (Netpol) has published a practical guide on how to monitor the police.

It’s vital that we support those working to hold the police to account, as well as groups like Sisters Uncut, Abolitionist Futures, and Community Action on Prison Expansion which are working to build radical alternatives to police and prisons.

It’s up to us to play an active role in undermining the legitimacy of policing so we can work towards a safer society for everyone.