What do aliens have to do with the climate crisis? Noam Chomsky's staggering take. 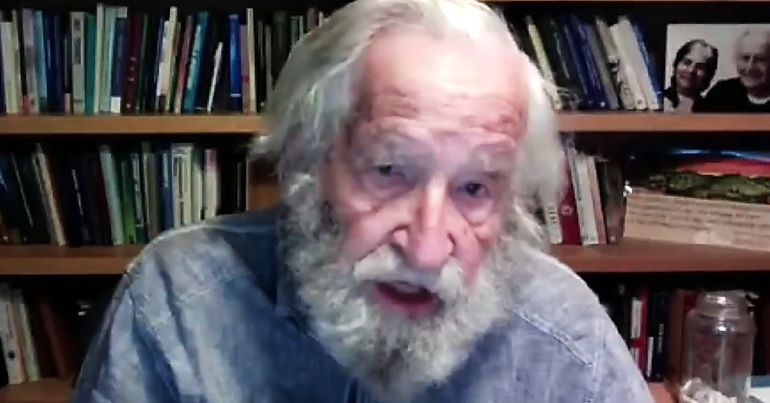 What do extra-terrestrials have to do with the environmental crises we’re facing on Earth? Much more than you’d think, according to the renowned scholar and activist Noam Chomsky.

Speaking at an online event organised by the campaign group Just Stop Oil on 23 April, Chomsky brought up an alien-related paradox – the Fermi Paradox – to “view what’s happening on Earth from a broader perspective”. His comments illuminated the “incredible challenge” that the human species currently faces.

The Fermi Paradox draws its name from Enrico Fermi, an Italian-American physicist. Simply put, the paradox is the conflict between the existence of a universe that appears to be able to support extra-terrestrial life and the lack of evidence that such life exists. The paradox effectively asks, if intelligent life exists elsewhere, why haven’t we found signs of it?

In the Just Stop Oil event, Chomsky spoke about one theory on why extra-terrestrial life is apparently nowhere to be found, saying:

One answer that has been seriously proposed and cannot be dismissed is that higher intelligence has developed innumerable times. But it has proven to be lethal. It has discovered the means of self-annihilation but has not been able to develop the moral capacity to prevent it. Perhaps that’s even an inherent feature of what we call higher intelligence.

Linking this to the current environmental crises, he added:

Well, we are now engaged in an experiment to test this thesis; to determine whether this principle holds of modern humans, of us.

Chomsky gave a prime example of this in his comments. He said that Vladimir Putin’s “criminal aggression” in Ukraine, which is devastating the country, has provoked “euphoria” in the executive offices of fossil fuel companies. That’s because, as an article in DeSmog highlighted, they’re able to exploit the war to further their own agendas and dig for more and more fossil fuels.

Chomsky described the war as a big setback to the environmental crises. Because these companies, no longer “bothered by the complaints of silly environmentalists”, are now free to further fill “their bulging pockets”. The companies are being lauded “for saving civilisation” due to their expansion plans amid the fuel crisis, Chomsky indicated. But what that means in reality is that they are now “destroying the planet more effectively”.

In short, the institutional structures we have are so devoid of moral capacity that they’re exploiting a life-destroying war to further destroy life. That’s how deeply entrenched their drive for self-annihilation is.

We have the means

Chomsky noted that there isn’t much time “to determine the answer” on whether the principle holds for modern humans overall. Speaking to the crowd that tuned in for the Just Stop Oil event, he said:

More accurately, you will determine the answer. Like it or not, fate has placed you in a position where you will determine whether we march on to disaster, or whether the human species and much other life on Earth can be saved from a terrible, indescribable fate.

The scholar emphasized that the “means” to save life on Earth from such a fate are “available” and “known”. They include a swift transition to clean energy sources, such as wind and solar, and a rapid downscaling of fossil fuel production. As Chomsky pointed out, economist Robert Pollin has suggested nationalising a number of the US’s big fossil fuel companies in order to do this. Pollin says that such nationalisation could advance “the necessary phaseout of fossil fuels as an energy source” in “an orderly fashion”.

Responding to a question about what individuals can do, Chomsky advised people to ask themselves “how can I make a difference wherever I am?”. It may be a “small difference”, he said, but “these things multiply very quickly”.

Though the differences individuals can make may be small, the task at hand couldn’t be bigger, as Chomsky’s concluding remarks highlighted:

you’re in the lead in determining whether human higher intelligence is capable of developing the moral capacity to overcome the drive for self-annihilation, which manifests itself in so many ways.

It’s an incredible challenge. There’s been nothing like it in human history, which will proceed to an inglorious end unless you and people like you can find the way to take the lead in facing and overcoming the challenges that lie before us.