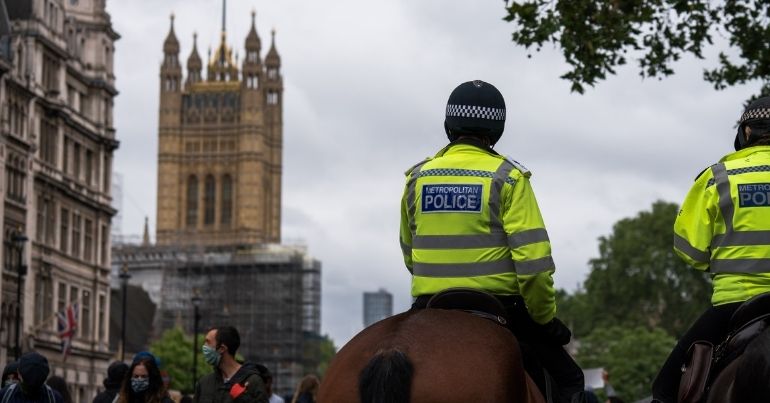 Charlie Harrison, a Metropolitan police officer, has been jailed for breaking a Black man’s knee in a ‘clear case of racial profiling’. Harrison fractured Carl Abrahams’ knee while Abrahams was visiting his partner’s grave with his children. Southwark crown court found Harrison guilty of causing grievous bodily harm. He has been jailed for two years and three months.

On 31 December 2018, Abrahams – a 47-year-old Black man – was visiting his partner’s grave in east London “with his two teenage sons”. Harrison – part of the Metropolitan police’s violent crime taskforce – approached the family after getting out of an unmarked police car. The plainclothes officer failed to identify himself. Without warning, Harrison kicked Abrahams’ knee, fracturing it and knocking him to the ground.

According to the Guardian, a passerby protested against the officer’s conduct. At this point, Harrison’s colleagues “rushed out their cars” and threatened to arrest the passerby.

Abrahams reported the incident to the Independent Office for Police Conduct (IOPC) in January 2019. He sought hospital treatment and was left on crutches for 12 weeks. He told the court that his children are still afraid of police and “fear they will be targeted because of the colour of their skin”. The Directorate of Professional Standards (DPS) launched an investigation in 2019.

A ‘clear case of racial profiling’

On 12 April, the court sentenced Harison to two years and three months in prison. In an interview, Harrison claimed that he stopped Abrahams to look for “drugs and weapons”. But during his trial, he claimed to have found it suspicious that Abrahams and his sons “noticed” his car.

Having heard the evidence at trial, I strongly suspect that the reason that you stopped Mr Abrahams and his sons was because they were black.

Had Mr Abrahams and his sons been white I suspect that you would have simply drove on by; this was in my judgment a clear case of racial profiling.

The judge found that Harrison had “no grounds” to carry out a stop and search, or to arrest Abrahams and his sons. During the trial, Harrison suggested that Abrahams’ sons were being “aggressive and confrontational”. But the judge stated that “the video footage shows the exact opposite”.

Having heard the evidence at trial I see no basis upon which you could genuinely have thought it necessary to defend yourself from a man walking down the street with his two sons with his hands in his pockets.

This was a deliberate assault.

The officer is now facing a “fast-track discipline process”. The Met will “consider whether race played a part in Harrison’s actions”.

Not a case of one ‘bad apple’

This matter was subject to a thorough investigation by the Met’s Directorate of Professional Standards and PC Harrison charged and later convicted by a jury.

His actions were found to have fallen well below the standard we expect of our police officers, with a man left badly injured. This type of behaviour has no place in our police service and undermines the confidence of the communities we are here to protect.

However, this incident of racial profiling and assault is not just a case of one ‘bad apple’. It’s the product of institutional racism in the Metropolitan police. Harrison’s taskforce were told to search for Black males suspected of violent crimes. And although Harrison has been imprisoned for grievous bodily harm, he has not yet been dismissed from the Met police.

More broadly, a UCL study found that “young Black males in London were 19 times more likely to be stopped and searched than the general population”. And according to the government’s ethnicity facts and figures:

the Metropolitan Police made 80% of all searches of Black people in the year ending March 2020.

22 years on from the MacPherson report, Black Londoners are still bearing the brunt of an institutionally racist police force.