You will never walk alone: the Hillsborough disaster remembered - Canary 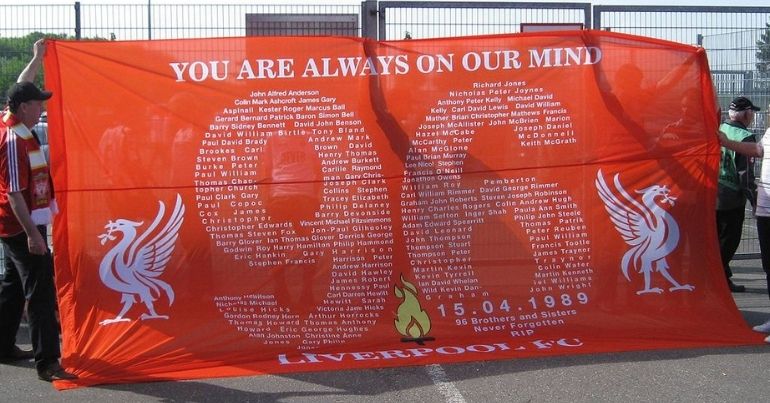 It’s 32 years since 96 men, women, and children died at an FA Cup semi-final on 15 April 1989. It became known as the Hillsborough disaster. The tragedy would come to symbolize Thatcher-era Britain – a byword for class war, corruption and gutter press lies.

All of those who died that day were Liverpool fans. In the aftermath, the right-wing gutter press and other sections of the British establishment launched a war of slander and obfuscation against the city and its people. This included false accusations that fans had tried to steal from those who lay injured and dying. And that a police officer trying to administer first aid was beaten up.

But the 2012 Hillsborough report laid to rest many establishment lies. Because it found that crowd management plans had been inadequate and too focused on potential fan disorder. It was also discovered that South Yorkshire police (SYP) and police lawyers had altered initial statements:

The report said that many of the worst headlines about the disaster, such as drunken violence by fans, had emerged from the police and a local MP, but that the claims were not borne out by the evidence:

Yet, from the mass of documents, television and CCTV coverage disclosed to the panel there is no evidence to support these allegations other than a few isolated examples of aggressive or verbally abusive behaviour clearly reflecting frustration and desperation.

Margaret Aspinall, the chair of the recently disbanded Hillsborough Family Support Group, recently spoke to the Liverpool Echo. Her son James died at Hillsborough, and she urged families to “stay strong” and said that her “thoughts go out to all of the families and survivors”.

32 years ago today, 96 children, women and men lost their lives at Hillsborough.

Our thoughts, as always, are with all those affected by the tragedy at Hillsborough and the 96 fans who will never be forgotten.

In 2016, an inquest ruled that the 96 had been unlawfully killed. Yet in 2019, a court ruled that the police commander David Duckenfield was not guilty of gross negligence.

As The Canary reported at the time, the daughter of one victim told the judge:

With all due respect, my lord, 96 people were found unlawfully killed to a criminal standard. I would like to know who is responsible for my father’s death because someone is.

In January 2021, it was reported that two police officers and a solicitor would face trial in relation to the Hillsborough disaster. According to the Liverpool Echo, each will “face a charge of doing acts with intent to pervert the course of public justice”.

For the Hillsborough families, justice has not yet been delivered. We stand in solidarity with them today.