Police brutalised another schoolboy. Scrapping stop and search is long overdue. - The Canary 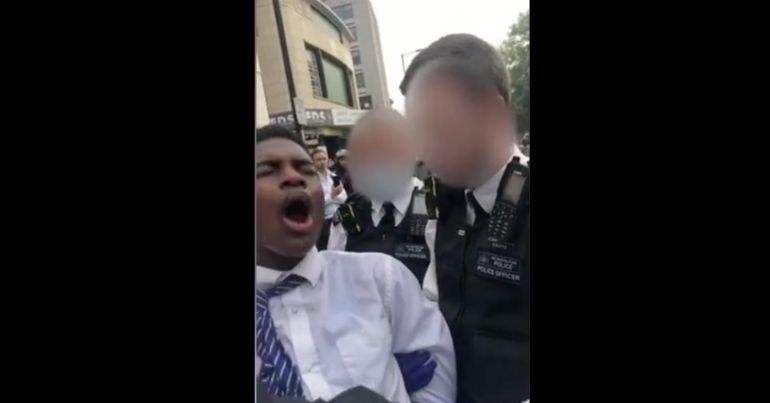 On 20 September, footage emerged of Metropolitan Police officers allegedly brutalising 13-year-old Benjamin Olajive during a stop and search in Streatham, south London. This is the latest in a number of incidents in September which have intensified calls from campaigners to scrap the practice, which police continue to use disproportionately and excessively against Black people.

Nothing but an afro comb

On 20 September, a mob of Metropolitan Police officers stopped 13-year-old Olajive while searching for a Black person carrying a knife. Olajive, who has ADHD and PTSD, was wearing his school uniform at the time. In distressing footage, he can be heard crying out: “my hands, my hands” as officers forcefully handcuff him. Members of the local community soon rushed to support Olajive, and demand that officers answer for their actions.

Sharing some footage of the incident, one person tweeted:

13 year old school boy, with an Afro comb; reported to be a knife, strangled and brutalised. Left bloodied and traumatised. #Streatham pic.twitter.com/oJCexRCE2I

After a 45 minute search, the ‘offensive’ item officers found turned out to be an afro comb. Criminal defence lawyer Aamer Anwar shared:

13yr old black schoolboy with ADHD & PTSD was allegedly choked by @metpoliceuk during a stop-and-search in London. On his way to McDonalds he was swarmed by police responding to a report of a black person with a knife – he had an Afro comb https://t.co/2xPvH7Rymv

Questioning officers’ decision to take the boy to the police station having found nothing but an afro comb, barrister Michael Etienne shared:

He was taken to the police station after being arrested on suspicion of criminal damage. On what basis, I hear you ask?

"[The Met] claim he ‘kicked a police car a number of times, causing dents’"

Olajive’s mother Zeyna Kada has accused the Metropolitan Police of using excessive force against her son. She states that officers “manhandled”, “strangled” and “scratched” him, and failed to take his ADHD and PTSD into account. Photos allegedly show blood on the sleeves of Olajive’s school shirt from where officers handcuffed the boy.

Another photo shows the 13-year-old with a swollen eye following the incident. Kada maintains that her son is traumatised as a result of his distressing encounter with police. According to the Metropolitan Police, the complaint regarding the incident is under investigation.

Really appalled to hear that 13 year old boy who goes to school in my constituency came away from a recent stop & search with a swollen eye and bleeding wrists.

His crime? Carrying an afro comb.

A review of stop & search is long overdue.https://t.co/F9WSFbzJ0Y

Highlighting the historic criminalisation of afro combs in Britain, Black and Asian Lawyers for Justice shared:

How long have we been subject to arrest for possessing an Afro Comb? Back in the day, the police used to say they were offensive weapons. Afro hair was always offensive to some largely because it was usually attached to black bodies. #Streatham #StopAndSearch pic.twitter.com/v5HzqjsTm5

Calling on the Met to provide Olajive with compensation and mental health support following the traumatic ordeal, children and young people’s mental health lead at the Centre for Mental Health Kadra Abdinasir said:

Benjamin, who has ADHD & PTSD, was handcuffed by 5 police officers…no words!

Time to scrap stop and search

The incident came just two weeks after footage emerged of a school-based police officer assaulting an autistic 10-year-old pupil. And on 13 September, a Metropolitan Police officer injured a 70-year-old Black man during a stop and search in Bromley, south east London.

Meanwhile, an Independent Office for Police Conduct (IOPC) report published in September found that police racially profiled school support worker Dwayne Francis in a stop and search. These incidents reflect the reality that police continue to use stop and search powers disproportionately against Black people, with most searches not leading to an arrest.

Highlighting the police’s excessive and disproportionate use of stop and search powers against Black people, Black Lives Matter UK shared:

Stop and search disproportionately affects Black people. We are 9 times more likely to be stopped by the police.

Stop and search is a racist practice that is violent and ineffective. The intention is not to curb crime but to terrorise black communities.#abolishthepolice

I think it’s social engineering. Deprive people of the conditions to thrive as children & you significantly reduce their capacity to resist as adults.

Calling for an end to harmful stop and search practices once and for all, Manchester-based campaigner Deej Malik-Johnson tweeted:

A young boy with ADHD and PTSD bloodied, cuffed, assaulted, choked, traumatised and humiliated his crime? Carrying an Afro comb on his way to McDonald’s. Some are saying stop and search needs to be reviewed, it doesn’t, it needs to be scrapped. https://t.co/guiy7hsJ6Y

Citing the incident as further evidence of the harm that investing the police with more powers could cause (as set out in the government’s proposed draconian Police, Crime and Sentencing Bill) John O’Connell said:

Benjamin Olajive, 13, special needs, ‘strangled and left bleeding and bruised’ in #Streatham #London after cops jumped him, mistaking his afro comb for a knife.

This is why we fight excessive police force and brutality. This is why they don’t need MORE powers.

Decades of evidence point to the fact that stop and search practices don’t work to curb crime, and only serve to control and traumatise marginalised people and communities. It’s time to scrap the harmful practice once and for all.