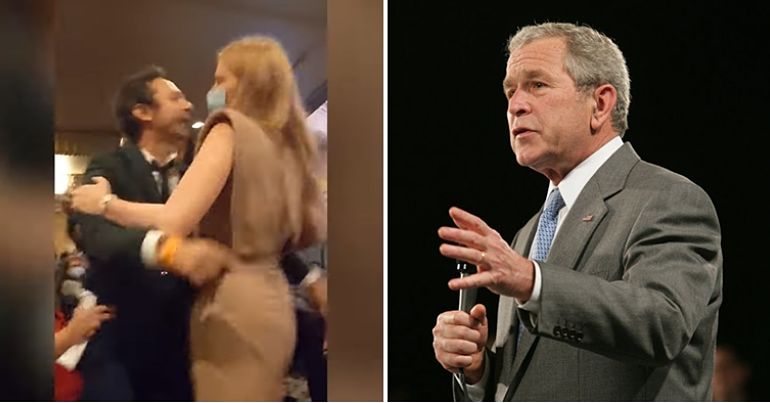 George W. Bush probably thought he was in for an easy night when he was invited to speak at a live event in Beverly Hills. But the former US president – best known for invading and destroying Iraq – wasn’t reckoning on an audience member named Mike Prysner.

Bush sounded relaxed until Prysner, who served with the US Army in Iraq, interrupted to demand an apology for the million Iraqis killed in the war.

Prysner also accused Bush of lying about Weapons of Mass Destruction (WMD) and made false claims about Iraqi involvement in 9/11 in order to support his calls for war.

As Prysner confronted Bush, two audience members tried vainly to wrestle the former corporal out of the room. However, they were quickly joined by security guards, who dragged Prysner the rest of the way out of the auditorium.

Speaking outside, Prysner said he had tried to read out a list of friends of his who died because of the war and Iraqis who had been killed during the occupation.

I tried to read the names but event runners immediately grabbed the list and tore it up. But I was able to shut it down for a little while. Right when Bush was getting into his first little cheesy story about his life and all that, trying to be funny…

A day later at a different event, Bush faced another barrage of criticism. Mint Press News, reported that researcher Jeb Sprague had also challenged the ex-president on Iraq. A Twitter video shows Bush smiling and laughing in response:

Last night researcher @JebSprague interrupted President George W. Bush in attempt to hold him accountable for his war crimes. This comes the day after @MikePrysner confronted him for his war crimes in Iraq.pic.twitter.com/SIW3wjREkN

Sprague later tweeted the full text of his intervention:

I just disrupted George Bush’s talk in Long Beach. I was briefly detained and then let go. Here is what I said:

Your war destroyed my cousin’s life. Your war created a nightmare for my family. He’s a shell of his former self. Tens of thousands of Americans and a million Iraqis have died. You used white phosphorus a chemical weapon in Fallujah. Arrest this man. Arrest this war criminal.

No rest for the wicked

Sprague and Prysner’s efforts were commended on Twitter. And one user pointed out that Britain’s own war criminals should be called out as well:

What Every right thinking human should say to Blair, Bush, @campbellclaret and the rest of the bloodthirsty vampires who sent good people to kill good people! pic.twitter.com/N4vAdQ8bKd

Good for this #Iraq war veteran. Why are #Bush & #Blair not in jail for #CrimesAgainstHumanity? https://t.co/uG40Hduker

None of the architects of the Iraq war have ever been brought to justice for their involvement in the disaster. And people like Mike Prysner are doing a public service by making sure the wicked don’t rest easy.