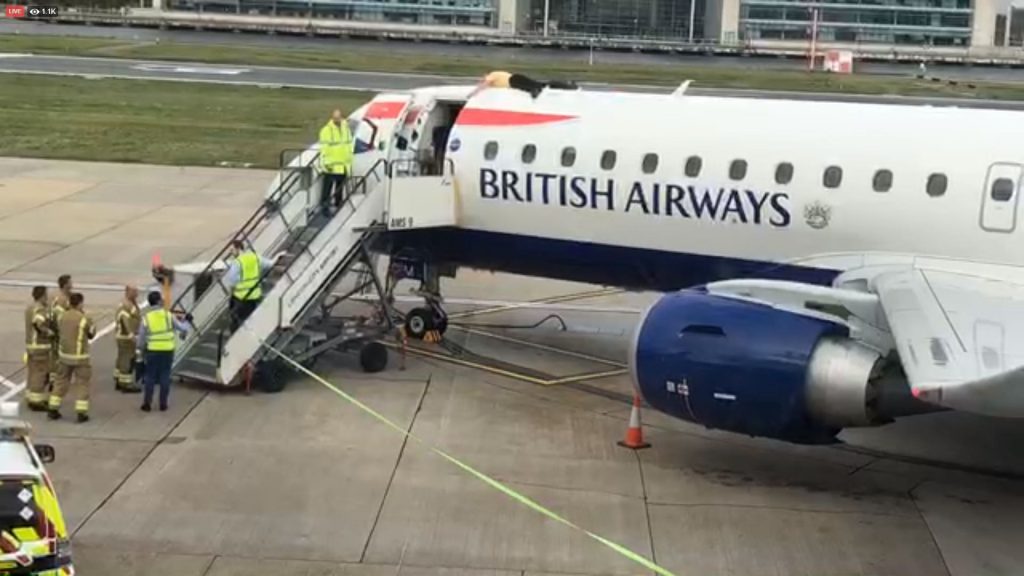 A judge has warned protesters who disrupt people’s lives they “will face serious consequences” as he jailed a former Paralympic athlete who superglued himself to the roof of a British Airways plane as part of a climate protest. Climate change itself, meanwhile, is already disrupting people’s lives and is certain to create greater and greater disruptions for as long as politicians fail to tackle it.

Judge Gregory Perrins said Extinction Rebellion activist James Brown, 56, who has been registered blind since birth, “cynically used” his disability and put his “own life at risk” to carry out the stunt at London City Airport on 10 October 2019.

The double gold medallist, from Exeter, climbed on to the plane, which was destined for Amsterdam, before gluing his right hand to the aircraft and wedging his mobile phone in the door to prevent it from closing. Northern Ireland-born Brown, who represented Great Britain in cycling and athletics before going on to represent Ireland in cross-country skiing, livestreamed the protest until he was removed after an hour.

Southwark Crown Court heard a total of 337 passengers had their flights cancelled, missing birthday celebrations, important business meetings, and family events, with the disruption costing the airline around £40,000.

Brown, who represented himself at his trial, denied one count of causing a public nuisance, claiming he had “to do something spectacular” to draw attention to the climate crisis.

He was found guilty in July after a jury deliberated for less than an hour and Perrins sentenced him to 12 months’ imprisonment, of which he will serve half, on 24 September.

It is important that those who are tempted to seriously disrupt the lives of ordinary members of the public in the way that you did and then seek to justify it in the name of protest understand that they will face serious consequences.

There is a clear dividing line between legitimate protest and deliberate offending, and you knowingly crossed it.

The warning comes after climate protesters Insulate Britain, an offshoot of Extinction Rebellion blocked the Port of Dover, in Kent, on 24 September, having caused chaos on the M25 five times in the past fortnight.

There were cries of “shame” and “shame on you” among Brown’s supporters in the public gallery as he was taken down to the cells and his solicitors said he will appeal the sentence.

The judge said he accepted Brown was acting according to his conscience and was motivated “by a desire to bring about a change you genuinely believe is for the benefit of all”. He also recognised there must be “some sense of proportion” when sentencing people who commit offences during a protest.

But he told Brown:

You are not entitled to more lenient treatment simply because you were protesting about environmental matters as opposed to some other cause. Everyone in this country has the right to protest and there are many ways in which that can be done without breaking the law.

The right to protest does not entitle you to cause major, widespread disruption to a major airport, with the inevitable impact that has on the lives of hundreds of people, simply because you think it is the right thing to do.

It is also important to note that although you claim your actions were intended as a protest, you targeted not those with the power and influence to bring about the change you wish to see, but ordinary people going about their daily lives.

That was a calculated decision on your part.

Tim Maloney QC, defending Brown at his sentencing hearing, had urged the judge to impose a fine or a community order instead of a jail sentence. He said:

He has expressed an intention not to become involved in unlawful protest again.

He regrets it and is determined not to be involved in such activity again.

Maloney said Brown has “overcome the barriers to live a successful and inspiring life” to compete at five Paralympic games, pursue a career as a maths teacher, and work for Gloucestershire County council in disabled children’s services.

He was also described as a successful businessman, having built a conference centre aimed at meeting the needs of disabled people and set up Mobiloo, a company which provides facilities for disabled people at festivals and events.

Giving evidence at his trial, married father-of-four Brown wept as he told jurors:

I was prepared to challenge myself, to be scared, to face the fear, because the fear of climate ecological breakdown is so much greater.

We are shocked that James has been sentenced to 12 months prison. James, registered blind and a gold winning Paralympian at five games should not be in prison for taking part in this protest.

This a dangerous judgment for our right to free speech, our right to protest and for those who campaign on environmental issues.

We will be appealing this sentence.