28 years since the murder of Stephen Lawrence, and we're still fighting for racial justice - The Canary 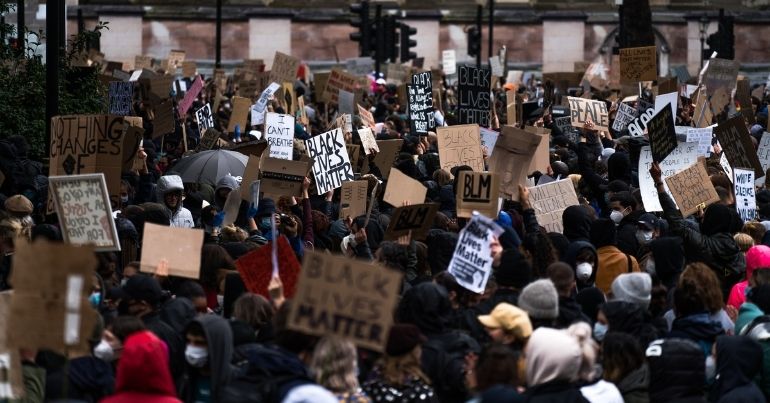 On 22 April, we commemorate the 28th anniversary of the racist murder of Stephen Lawrence. His untimely death led to the 1999 MacPherson report – a watershed moment for race relations in Britain. But 28 years on, we are still fighting against racist oppression in all areas of life.

The murder of Stephen Lawrence

According to the inquest, “five white youths” murdered 18-year-old Lawrence in 1993 in “a completely unprovoked racist attack” in Eltham, South-East London. Police arrested five suspects but didn’t convict them. Only two of his attackers – Gary Dobson and David Norris – were sentenced in 2012. The tragedy set Lawrence’s parents Doreen and Neville on a decades long fight for change and for justice.

The 1998 inquiry into police mishandling of Lawrence’s case concluded with the MacPherson report, “one of the most important moments in the modern history of criminal justice in Britain”. It found the Metropolitan police to be institutionally racist and set out 70 recommendations on how to tackle racism in British policing, education, legislation, and public life. Institutional racism, as set out in the MacPherson report, is defined as:

the collective failure of an organisation to provide an appropriate and professional service to people because of their colour, culture, or ethnic origin. It can be seen or detected in processes, attitudes and behaviour which amount to discrimination through unwitting prejudice, ignorance, thoughtlessness and racist stereotyping which disadvantage minority ethnic people.

Reflecting on Lawrence’s legacy, the conviction of Derek Chauvin, and the police killing of young Ma’Khia Bryant in Ohio, No More Exclusions community organiser Zahra Bei told The Canary:

I think we need to resist the temptation to create symbolic martyrdom out of Black suffering, and Black trauma, and Black pain. I think both George Floyd and Stephen – and all the other Black people, young Black people, children – that have died would much rather be alive than being commemorated or remembered as symbols of justice – or injustice.

I think today should be a day of reflection and rejoicing, but also a day of resolve that we’re not going to fail young people like Stephen Lawrence anymore.

In the Stuart Hall Foundation’s 2021 race report, Stephen Ashe analyses the staggering 589 recommendations that have been made across education, employment, health, housing, policing, and the criminal justice system in 13 different race reports published between 1981 and 2017. Ashe found that the government and legislators have failed to implement many of these recommendations. In the wake of the 2020 Black Lives Matter protests, prime minister Boris Johnson announced a Commission on Race and Ethnic Disparities. Exasperated by the government’s failure to implement existing recommendations on how to tackle racial inequality, shadow justice secretary David Lammy said:

In its report, the inquiry – led by Tony Sewell – concluded that it “found no evidence of systemic or institutional racism”.

I think that much more work remains to be done. I feel that we’ve failed the youth… and I think we’re actually positively going backwards now. Given the people who are in power, the policies that are in place. The constant denial, gaslighting, and… state violence and oppression that we see.

Policing and the criminal justice system

Today, Black people account for 8% of deaths in police custody but only 3% of the population. Since 1990, 189 people from Black or ethnic minority backgrounds have died during or following police contact. Yet no officer has been prosecuted for murder or manslaughter, despite several rulings of “unlawful killing”.

In the case of youth justice, race disparities are getting worse. While children and young people from Black and ethnic minority backgrounds made up 26% of those in the youth justice system in 2008, they now make up 43%. The joint enterprise doctrine and gang databases continue to target and criminalise young Black men. And when Black Brits rose up against these injustices in summer 2020, they were over-policed and under-protected by a racist force.

As exemplified by the increasing presence of police in schools, and government plans for ‘secure schools‘, Britain’s education system is inextricably linked to the criminal justice system. Disproportionate school exclusion rates and the defunding of youth support services have created a PRU-to-prison pipeline that systematically criminalises Black working-class children and young people. As reported in The Canary in 2020, the Institute of Race Relations revealed Britain’s ‘two-tier’ education system:

A system in which ‘deserving’ students are encouraged to thrive in the academy sector, while those deemed ‘undeserving’ are relegated to pupil-referral units (PRUs) and alternative provision (AP) – most of which aren’t fit for purpose. This has the greatest impact on working-class Black Caribbean boys, who are over-represented in school exclusion rates, in PRUs and AP (where they are vulnerable to exploitation by criminal gangs), and the youth justice system.

Racist uniform policies reflect the extent to which schools criminalise and police Black and Brown children. Teachers are more likely to underestimate Black students’ grades, and teach a curriculum that doesn’t reflect the world we live in. Meanwhile, Pimlico Academy leadership is threatening students who rose up against the school’s racist, misogynistic, and Islamophobic culture with school exclusion. And other schools are pushing Black educators out for speaking up against injustice.

In workplaces across Britain, employers and colleagues continue to subject workers of colour to explicit and institutional racism. According to the Trade Union Congress (TUC) Racism at Work survey, over 70% of workers from ethnic minority backgrounds have experienced racial harassment at work in the last five years.

The coronavirus (Covid-19) pandemic has shone a light on the disgraceful health disparities that exist in Britain’s health service. We have seen people – including healthcare workers – from Black and ethnic minority backgrounds die in disproportionate numbers. In 2020, medical students revealed how medical schools still fail to teach “life-or-death” clinical signs in darker skin. And according to MBRRACE-UK’s 2020 report on maternal deaths, Black women are four times more likely to die during pregnancy by comparison to white women. During the Black maternal health parliamentary debate on 19 April, Labour MP Bell Ribeiro-Addy shared her harrowing experience of pregnancy, demonstrating that Black women are not necessarily safe in the hands of medical professionals no matter who they are.

We are yet to see justice for the victims of the Windrush scandal. Campaigners are still fighting for the Jamaica 50, 13 of whom the government deported in 2020. And the Home Office is still prepared to deport Osime Brown – a Black 22-year-old autistic man with learning disabilities. He was imprisoned in 2018 under the defunct joint enterprise act for the theft of a mobile phone and lost his leave to remain. The Home Office now intends to deport Brown to Jamaica, a country he left when he was four years old. And the situation is getting worse.

The Home Office has admitted that abhorrent new immigration legislation designed to “criminalise and deport migrant rough sleepers” is likely to discriminate against People of Colour. Meanwhile, police continue to surveil and criminalise Muslim communities as part of Prevent and the war on terror.

Ethnic inequalities in housing persist. And the survivors and bereaved families of the Grenfell fire are still fighting for justice for the tragedy’s 72 victims, and for institutional change to ensure the avoidable tragedy isn’t repeated.

Stating that the report is “null and void if it fails to acknowledge systemic and institutional racism”, Bristol Green Party councillor and Police and Crime Commissioner (PCC) candidate Cleo Lake told The Canary:

It was the tenacity, persistence and bravery of Stephens’ parents, Doreen Lawrence (now Baroness Lawrence) and Neville Lawrence, that led to the Macpherson inquiry and subsequent watershed 1999 Macpherson report, that birthed the term and notion ‘institutional racism’. To turn back on this now when there is still work to be done disrespects this history and contemporary efforts by a large cross section of society towards real change and progression.

Lake is calling on councillors, candidates, mayors, PCC, and candidates to sign an open letter calling for the government to revoke the report. Looking to the future, she added:

Let’s create change. Let’s live to higher standards. Let’s move beyond a state that all too often, all too apparently unknowingly peddles hate.

Decades of government inaction demonstrates that we can’t wait for the racist state and its institutions to implement change. We must demand that the government and legislators implement the hundreds of changes that have been recommended over the years.

In the meantime, our hope lies in grassroots activists and organisations fighting on the ground for justice every day. It lies in community leaders who put people before profit, and everyday people who support the work they do. Today, we celebrate Lawrence’s life and legacy and remember that the fight for racial justice is far from over.