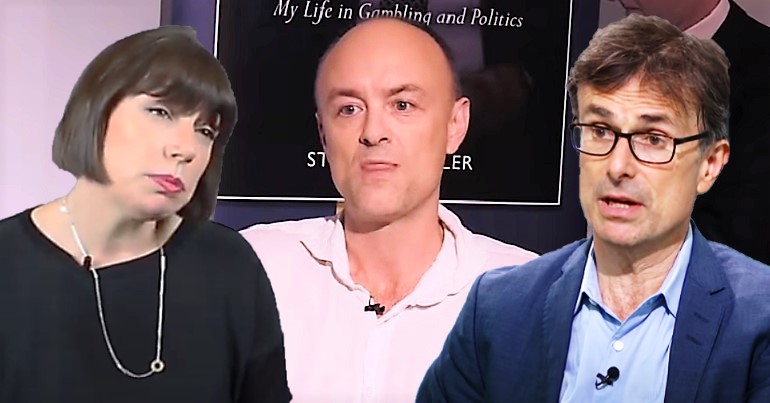 The corporate media just exposed its own agenda with the latest Dominic Cummings story. When some of the biggest ‘client journalists‘ around are having a go at an article, then something is definitely up. Because while many of them recognise that the story is a distraction by the Tories – none of them criticised the media for running with it in the first place.

As The Canary previously reported, someone leaked Johnson’s private text messages to the media. They were between him and James Dyson. The subject? Tax breaks for the latter’s employees. The leaks came after a series of other corruption stories – like the David Cameron/Greensill scandal. So, who is behind the leaks? If you believe much of the corporate media on Friday 23 April, it’s former Johnson adviser Cummings. The story itself was plastered all over social media. But there’s another story behind this story. And it’s corporate journalists’ reactions to it.

Dom the leaker splash in the Sun/Times/Tel, successfully knocking the Cameron/Greensill/lobbying scandal off the front #deadcat pic.twitter.com/kWL4E4IQqD

It was former Tory advisor Lynton Crosby who some credit with creating the “dead cat”. As Johnson himself said:

There is one thing that is absolutely certain about throwing a dead cat on the dining room table – and I don’t mean that people will be outraged, alarmed, disgusted. That is true, but irrelevant. The key point, says my Australian friend [Crosby], is that everyone will shout, ‘Jeez, mate, there’s a dead cat on the table!’ In other words, they will be talking about the dead cat – the thing you want them to talk about – and they will not be talking about the issue that has been causing you so much grief.

POLITICO was tying itself up in knots over it. Emilio Casalicchio dedicated his whole Playbook column to the story. But even he had to admit that:

Westminster watchers should be able to spot a dead cat when one appears on the table, and this certainly smells like one. Despite being enough of an excellent story to lead Playbook, it’s totally meaningless whether Cummings leaked the texts or not

The Guardian‘s Peter Walker tweeted that:

The Boris Johnson v Dominic Cummings story is an interesting and curious piece of media management. In one sense it’s informal – gossipy, anonymous source quotes. And yet it’s carefully briefed to three friendly newspapers with a strict 2215 embargo, like an official announcement.

But the paper’s own analysis failed to pick up on this idea. Instead, it focused on Johnson’s “government by WhatsApp” and the potential focus on the leaks instead of the content of them.

Then, enter the Mirror‘s Kevin Maguire to call ‘foul’ on a previous story:

This was Dan Hodges’ Mail on Sunday story that a “Labour mole” inside the government was responsible for the leaks. So, who is the mole, Dan? Cummings or a Labour insider? He no longer seems to know:

The theory No.10 briefed all the papers Dom Cummings was behind the sleaze leeks as a way of discouraging people from looking at the issue of sleaze is an interesting one…

Another shithouse journalist got in on the ‘I’m shocked the corporate press are government stooges’ act:

You can see why Number 10 might prefer to have a Bad Blood style media fight between Boris and Dom rather than the incessant drip of major new lobbying allegations that’s been coming daily.

I’m not sure it’ll work, but I can see why they’d try to derail that narrative.

So, what can we deduce from this circus?

Firstly, that if any of the journalists calling the story a distraction had got to it first, then their reaction would have been different. Secondly, that employees of corporate media are more than capable of critical thinking about a government-seeded piece of news, but only when it suits their own agenda. But, thirdly, that when push comes to shove, none of them will break rank too much.

Let’s call this what it really is – a piece of client journalism. In other words, the press doing the government’s work for it. Because if these corporate hacks had exposed this truth, then their own careers would be on the line. And we couldn’t possibly have that, could we?