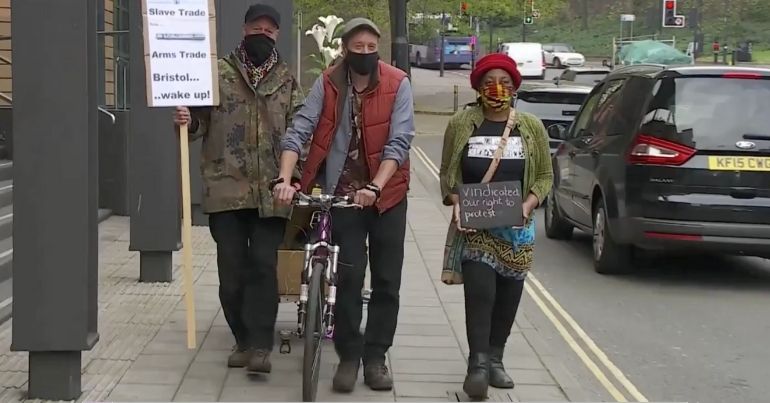 Avon and Somerset police have issued an apology to four protesters they arrested for peacefully demonstrating in support of the ‘Colston Four’. The force has recognised that its blanket ban on protests and subsequent arrests of protestors was “unlawful”.

On 25 January, Avon and Somerset Police arrested Ros Martin, Paula Richardson, Rolland Dye and Taus Larsen. The force issued them with fixed penalty notices (FPNs). It had issued a blanket ban on protests, warning that demonstrators could be given a £10,000 fine. Exercising their right to peaceful protest, the four individuals demonstrated outside Bristol magistrates’ court. This was to express solidarity with the Colston Four, the people accused of toppling slave trader Edward Colston’s statue during the 2020 Black Lives Matter protests.

Martin and Richardson wrote messages of solidarity on the pavement using chalk. Dye held up a placard, and Larsen cycled around the area playing music. According to Bhatt and Murphy solicitors, they all “wore masks and practised social distancing”.

In February, Martin told The Canary that police immediately arrested her. Moreover, they failed to follow recommended practice to engage, explain, and encourage those breaching lockdown rules to disperse. Martin said:

I was alone at the time, there was no other protester, I had a mask on and socially distanced, wrote three words and was immediately arrested.

In a statement made after Avon and Somerset police’s apology, Larsen said:

The whole thing was ridiculous. I wasn’t posing any risk to the public, but the police put me in a position which increased the risk to me and to the officers dealing with me.

Following a legal challenge, Avon and Somerset Police acknowledged that the force’s blanket ban on protests was unlawful. The ban was in breach of Articles 10 and 11 of the European Convention on Human Rights which protect freedom of expression and freedom of assembly. As a result, the arrests and FPNs were also unlawful.

According to solicitors Bhatt Murphy:

The correct approach would have been to consider whether the individual protest was safe to proceed in its particular circumstances.

‘Vindicated’ in their right to protest

A statement Avon and Somerset Police issued on 22 April said:

we now accept we misinterpreted the regulations and that the arrests and the issuing of FPNs were unlawful.

We have apologised to them and explained officers’ actions were motivated purely by a desire to protect the health of the public at the height of the pandemic.

The force has cancelled the fines for the four protesters. And it has payed compensation for their wrongful arrests in a “substantial” out of court settlement.

In the week that justice has been served for George Floyd, it is vital that the right to peaceful protest in support of the Colston 4 has prevailed. It is fundamental to our democracy. The locking up of peaceful protestors should never happen.

It is welcome that the Chief Constable has apologised and that justice has been done for our clients. SARI supports peaceful, safe protest as it has been a key aspect throughout history for upholding and protecting human rights.

What could this mean for other protests?

The Chief Constable’s acceptance that an outright ban on protest will never be lawful, including during a pandemic, is important. My clients regard chalking messages of solidarity on the pavement as a peaceful, safe and lawful form of in-person protest.