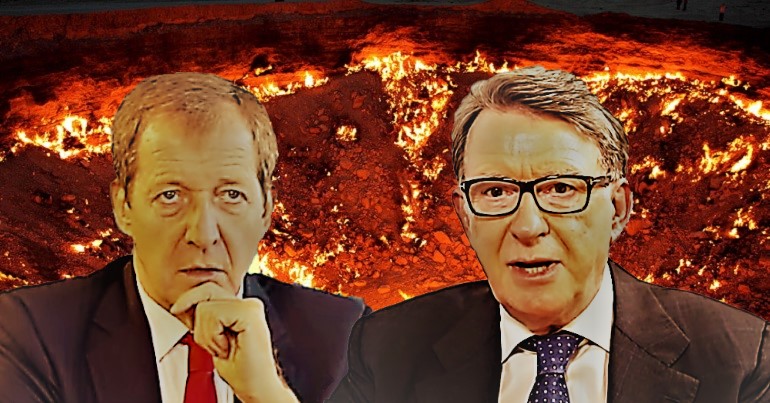 Two ‘serial liar’ Blairites have been prominent on social media in recent days. And it’s supposedly left-wing people who’ve been promoting them. Let’s be clear: this really isn’t OK.

The return of serial liars Campbell and Mandelson is beyond a joke.

Anyone allying with these frauds is picking power & privilege over truth and justice. https://t.co/060mAqTXcq

So, what’s the deal?

The return of the “Prince of Darkness”

First up and Peter Mandelson was in Hartlepool. He was campaigning for Paul Williams, Labour’s candidate in the by-election. It was “great to be back” according to Mandelson. Apparently, Labour is “under new management”. Williams declared on Twitter that:

Mandelson is well respected across Hartlepool as a hard working MP here for 12 years.

Anyone see the problem here? Well, this is of course the same Mandelson that, as Socialist Appeal wrote, was the “Prince of Darkness” that Labour:

parachuted into Hartlepool to serve as its MP in the 1990s.

Is that this Peter Mandelson

“One of its fundamental articles of faith was that working-class voters did not matter because as Peter Mandelson put it, they had ‘nowhere else to go’. Instead, it was ‘middle England’ that had to be courted.”https://t.co/3vHs09plTH

And as someone else noted:

Here you are praising someone who tirelessly worked against the most popular leader of the Labour party in a generation.

What does that say about you?https://t.co/ePK7dih214

It’s perhaps a measure of both Williams and the Labour leadership that an endorsement from one of the most controversial figures in UK politics of recent decades is somehow a good thing. But, Blairites attempting to bring their careers back from the dead, and people welcoming these political zombies back, is a running theme at present.

Enter Blairite number two: Labour’s very own Dominic Cummings, Alastair Campbell. He’s been all over Twitter in recent days. This is because of campaigning lawyer Peter Stefanovic, whose video about Boris Johnson’s “relentless lying” went viral:

By working TOGETHER we have sent a message to UK media that if they won’t hold this Prime Minister to account for his relentless lying we will damn well do it ourselves!

All power to Stefanovic. He’s been persistent in trying to get the corporate press to report on Johnson’s lying. This led to Campbell on BBC News jumping on Stefanovic’s bandwagon when he mentioned the video during an interview:

Alastair Campbell – “Peter Stefanovic’s video has had 12 million views. Every day he asks BBC why will you not play these clips of Johnson in Parliament lying at dispatch box. PM’s are meant to resign if they lie at dispatch box”

So, people have been praising Campbell for raising the video:

.@campbellclaret is right on the money.

To be blunt, I think @BBCNews is lazily complicit in the erosion of our national propriety.@peterjukes & @OborneTweets have been doing it 100% right – but look at the flippant mien of the BBC interviewer here.pic.twitter.com/pNTbotrr86

Thank you @campbellclaret for raising this with @BBCNews

The response from the BBC interviewer – “Do people care?” was disgraceful

Thankfully the 6 Opposition leaders who this week launched Parliamentary action against the PM because of it do care as do millions who watched it https://t.co/dAqXPURCQd

Anyone see the problem this time? Well, this is of course the same Campbell that helped create ‘New Labour’. As the website politics.co.uk noted:

Campbell was said to have coined the name ‘New Labour’; drafted the speech that led to the symbolic rewriting of Clause IV in the Labour Party constitution; and worked to court Rupert Murdoch and persuade the Sun newspaper to support Labour in the 1997 General Election.

Neither Mandelson nor Campbell have even remotely left-wing principles. They are both careerists. Both men are more interested in corporate capitalism than egalitarianism. Yet some people are now portraying both as a pair of moral compasses.

So, as Mendoza summed-up:

The people promoting both Mandelson and Campbell are either:

Make your minds up which one you think it is.