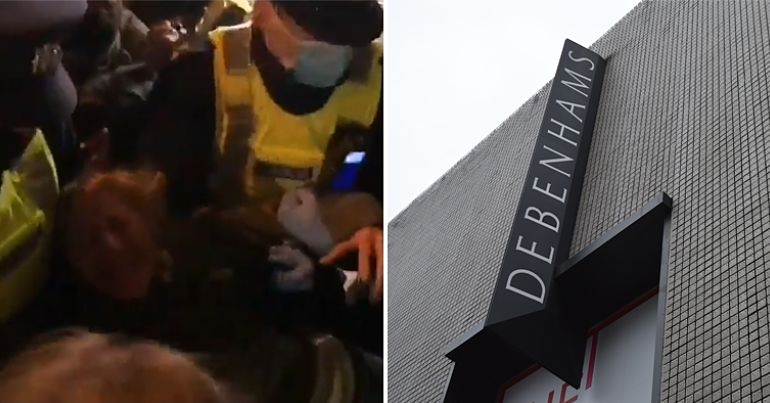 In April 2020, Debenhams announced it was furloughing its UK staff. At the time it said it wouldn’t reopen its Irish stores because coronavirus (Covid-19) had affected the company’s operations. This resulted in around 1,000 Irish job losses. So since 26 May 2020, Debenhams’ Irish staff have picketed its stores and engaged in industrial action:

to prevent the removal of any remaining company assets from the closed stores and to pressurise the Debenhams parent company in the UK to pay a fair union negotiated redundancy package to their loyal staff in Ireland.

And almost one year on, its Irish staff are still campaigning for “a redundancy deal from Debenhams” and:

decent treatment from a company we have served for years.

However, on 22 April, gardaí (southern Irish police – An Garda Síochána) launched a “major mobilisation” against peaceful protesters at Debenhams Henry Street branch in Dublin city centre. The gardaí were there to ensure corporate giant KPMG could retrieve Debenhams stock. And their behaviour should remind people in the UK why we absolutely must Kill the Bill.

Action against Debenhams’ decision has been ongoing since April 2020:

CWI members today standing in solidarity with the #Debenhams workers who took to the streets (while respecting social distancing!) and organised online to defend their jobs. #supportdebenhamsworkers #standwithdebenhamsworkers pic.twitter.com/W2w05DMOcV

Dropped down to support the Debenhams workers #100days of protest calling for their redundancy payments to be improved.#StandWithDebenhamsWorkers #DevilWearsDebenhams pic.twitter.com/XvbKeRFlDg

222 days on the picket looking for a fair redundancy of 2+2, up the workers! #BoycottDebenhams #StandWithDebenhamsWorkers pic.twitter.com/2NDQoZ3maw

But involvement from gardaí has also been ongoing since then. Since workers started protesting outside Debenhams stores, their protests been under surveillance. On one occasion, gardaí claimed protesters were “in potential breach” of coronavirus regulations.

On another occasion they threatened protesters with arrest:

Gardai threaten protesting Henry St Debenhams workers with arrest if they don't disperse. I will be raising this case in the Dáil on Thursday. #debenhams #COVID19ireland @ICCLtweet

Gardaí defending business interests in Cork today. Not only did they threaten the striking workers with arrest, but they suggested workers were falsely imprisoning the driver who was removing assets from the premises by blocking the exit. Full support to the #Debenhams workers! pic.twitter.com/vDg6BDyZpH

And it gets worse. As the strike continued, gardaí used force to remove strikers from the picket:

In the dead of night, the #Gardai acted as #KPMG's private strikebreaking force as they physically pulled ex-#Debenhams workers off a #picket in #Blanchardstown so that stock could be removed. pic.twitter.com/mEtIR1Nq8e

Then on 22 April, they began a “major mobilisation” to break the picket. This was to allow liquidator KPMG to remove stock from its Irish stores after protesters barricaded themselves inside:

I've listened to @morningireland and @rtenews and still not a mention of a major mobilisation of Gardai to break the #Debenhams Henry Street picket last night. Media blackout by state broadcaster. Spent 10 mins talking about some motor converter thefts #HenryStreetHeroes pic.twitter.com/T0ZUe2dwW3

Another example of the force used by the Gardaí inc the Public Order Unit against ex Debenhams workers and supporters. The Gardaí helped & facilitated scabs in KPMG passing the picket line by trying to intimidate people and dragging them out of the loading bay. @DebenhamsStaff pic.twitter.com/wiveoHKQhU

On Parnell street. Hundreds of gardai acting in collusion with KPMG trying to break the year long #debenhams strike in the middle of the night. Come down to support if you’re around. This is a fight for all workers. ⁦@pb4p⁩ ⁦@morningireland⁩ ⁦@NTBreakfast⁩ pic.twitter.com/58PrkcFm5i

Using its public order unit, gardaí cut off picketers from their supporters at the front entrance:

The Standing with Debenhams Facebook page with @mobrien1975 goes down.

Public Oder unit surrounded the supporters of the former #Debenhams workers as they pleaded with the Gardai not to hurt the strikers. A really sickening scene tonight on Parnell Street. #HowIrelandWorks pic.twitter.com/B7hhgw42F1

Moreover, gardaí used angle grinders to force the picketers’ gate open. Picketers had barricaded themselves behind this gate to prevent KPMG removing stock from this Dublin city centre store. They said when gardaí arrived they kept supporters of the picketers on the outside: 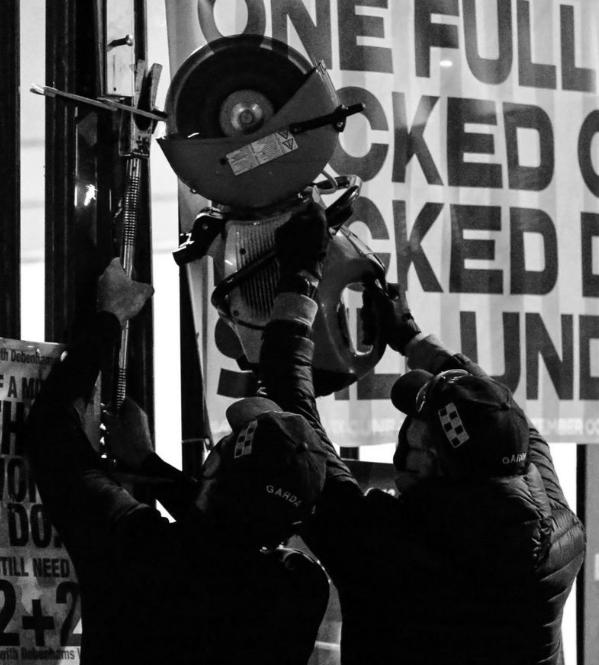 Other gardaí entered from behind the picketers’ position, thereby surrounding them and completely cutting them off from supporters: 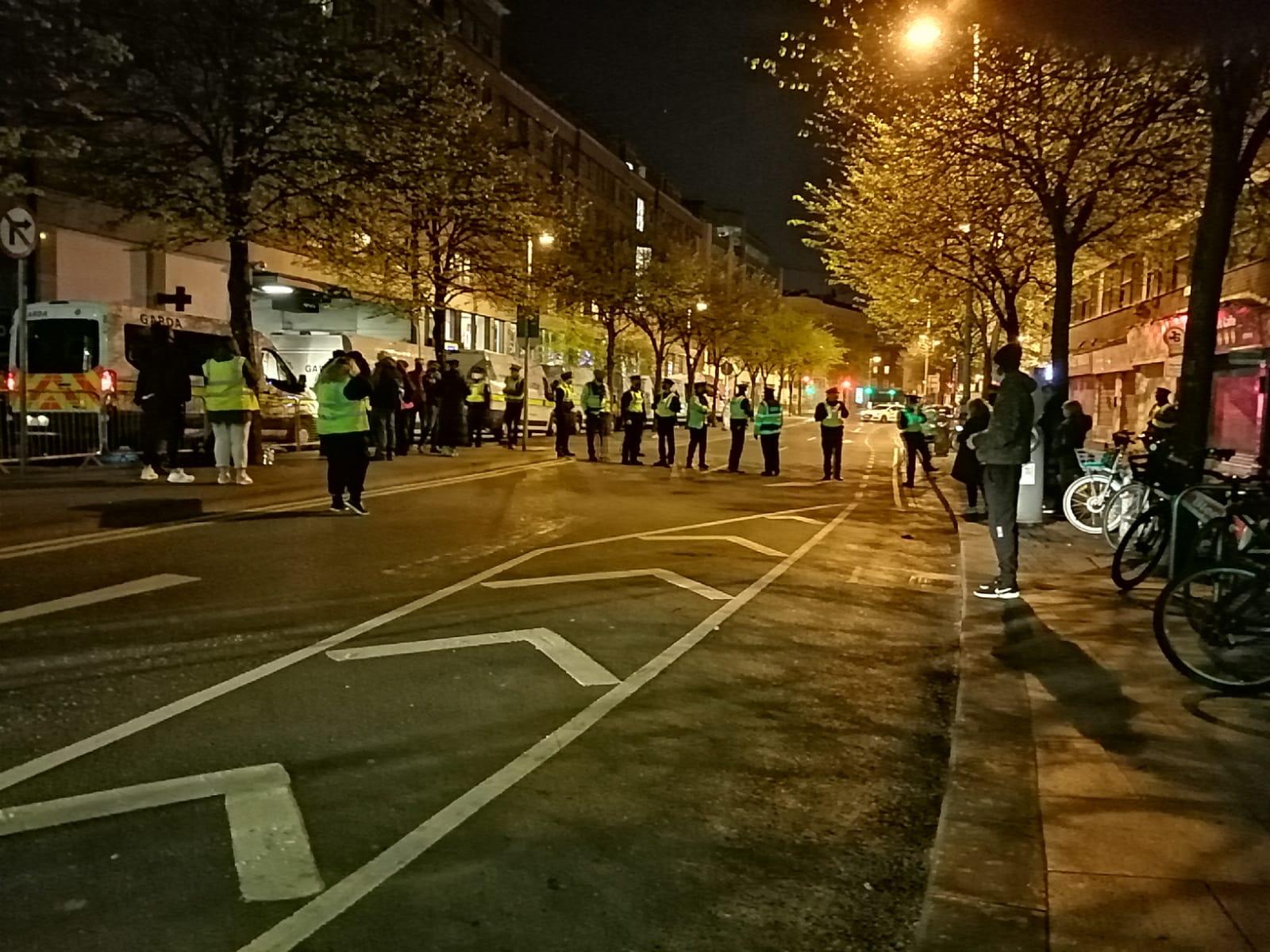 Protesters told The Canary that gardaí presence was like a scene from a “terrorist attack”. But this was “a peaceful protest”.

The Canary contacted An Garda Síochána for comment. A spokesperson responded:

An Garda Síochána attended premises in Dublin City Centre and Manor West, Tralee on 22nd and 23rd April, as required [on] the execution of a High Court Order. An Garda Síochána has no further comment at this time.

In 2006, Debenhams was valued at £2bn. And in 2018 it made a profit of £160m. Then, following the pandemic, it sold its brand and website to Boohoo for £55m. However, a training fund of just €3m is all that’s currently on the table for striking workers. The workers have described this fund as an ‘insult’.

One of the picketers, Suzanne Sherry, told The Canary she’d worked for Debenhams since 1996. She said on 9 April 2020 she:

all of our belongings are still in our lockers, we have never been given permission to go back in and retrieve them

The Canary also contacted KPMG and Debenhams for comment, but neither responded by the time of publication.

Warning for the UK

When Boohoo took over Debenhams in the UK in January, Irish protesters sent a warning message to their UK colleagues. Shop steward Valerie Conlon said UK workers could receive the same treatment from Debenhams as Irish workers. Conlon added:

The scenes in Dublin on 22 April should send another warning to UK workers. Because if the controversial Police, Crime, Sentencing and Courts Bill makes its way through parliament, then peaceful protest is at stake. That could include the right of workers to strike and picket.

While these scenes took place in a separate country, they aren’t dissimilar to what’s happening in the UK. And they should act as a wake-up call to everybody.

As a result of this strike, the socialist party People Before Profit (PBP) is bringing a new bill before Dáil Éireann (the Irish parliament). According to PBP, this Bill aims to:

put workers right to the front of the queue for payouts from a liquidation pot.

And more importantly, Sherry told The Canary that the worker protest at the Henry Street branch will continue. The protection of protest is paramount.