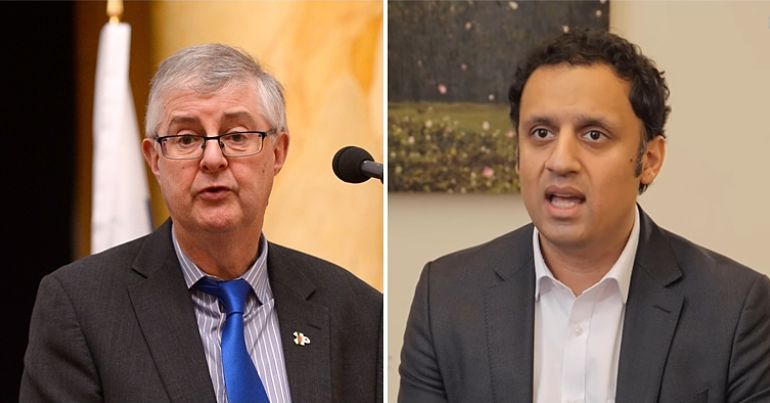 What happens if Scotland breaks away, and there’s a Conservative government not willing to concede any more powers to Wales? Would Welsh Labour be adopting a more pro-independence agenda in that scenario?

But when Scottish Labour leader Anas Sarwar announced Labour’s manifesto on 22 April for the Holyrood elections, he took an all together different approach. Because Sarwar’s manifesto takes a hardline position against Scottish independence. And this seems to be out of step with key players in the Scottish Labour movement. A point that wasn’t lost on #IndyRef2 supporters:

The death of British Labour in Scotland holds maybe some lessons for its Welsh branch office. When reality sets in change happens.

This article is part of The Canary’s #Independence2021 series.

He also admitted the UK is:

more in peril than at any time in my political lifetime.

He added that the current Westminster government is effectively fuelling the drive for independence as it ‘fails’ to see:

the fundamental need for reform. They believe that just by flying more Union Jacks around the place will somehow reassert the authority of a Westminster dominant government.

Furthermore, Drakeford has made it clear that there should be a referendum on Welsh independence if Plaid Cymru wins a majority in Wales.

But Sarwar isn’t seizing on this opportunity for a second referendum in Scotland. Instead, he’s backing the status quo. And as statistics are against him in the wider Labour movement, it shows he’s really at odds with the grassroots:

And it’s especially difficult to understand when so many in the Labour party itself support independence:

Sarwar under pressure to drop indyref2 opposition after candidates back it | The National https://t.co/IRxXcvzASk

While the SNP will wait until the pandemic crisis is over before calling for another referendum, it’s still calling one. And it’s doing so regardless of Boris Johnson’s opposition.

Rather than acknowledging reality – like Drakeford – Sarwar’s burying his head in the sand. But strangely, in taking that position, he’s actually not alone. Because Labour Party leader Keir Starmer is doing likewise. This won’t end well for either of them.