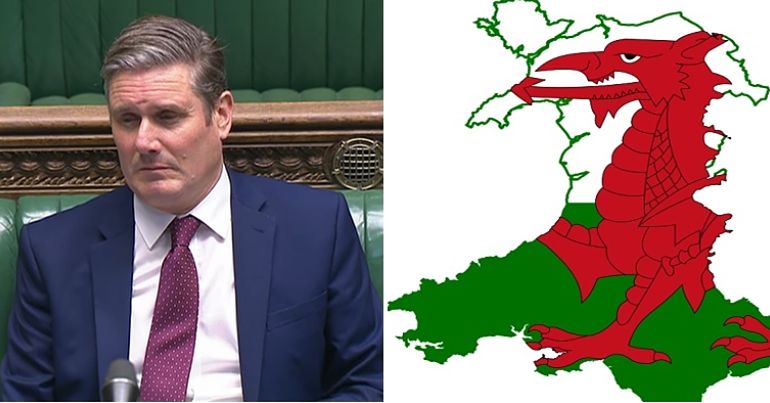 As elections for the Senedd on 6 May draw closer, Labour Party leader Keir Starmer visited south Wales. He campaigned with Welsh Labour leader and first minister of Wales Mark Drakeford. And with just three weeks remaining, it was Starmer’s first visit to Wales during this campaign.

But given that Drakeford’s approval ratings in Wales are higher than Starmer’s in the UK, it’s difficult to see what good his visit would do for Welsh Labour’s campaign. Because Labour’s popularity is under threat in a post-Brexit and post-pandemic Wales. And as Labour won’t back a referendum outright, growing support for independence in Wales also undermines Labour’s position.

This article is part of The Canary’s #Independence2021 series.

And this is critical, because one anti-Assembly party, which also happens to be against independence, already believes the Assembly (Senedd) is unnecessary. It believes Westminster adequately serves Wales. So if the Assembly’s powers are eroded, it could strengthen the argument to abolish the assembly, thereby setting independence back further.

Bob Lloyd, the head of Labour for IndyWales, thinks Starmer wouldn’t “block” independence. However, Lloyd believes that if Scotland leaves the UK, Welsh Labour would be in a “difficult position”. He added:

I don’t expect Starmer to get on board with Welsh independence, but then I don’t think it’s really his concern to have a position on independence in Scotland or Wales.

So, I don’t expect Starmer to support Welsh independence at all – but I don’t think he’d block it, rather, he’d respect it.

Research suggests most people in Wales believe that Drakeford handled the pandemic better than Boris Johnson’s Westminster government. But this might not translate into votes for Drakeford on 6 May.

According to WalesOnline‘s polling, Drakeford’s handling of the pandemic isn’t popular with younger voters. And, while it is popular with older voters, the expectation is that older voters could vote Tory anyway.

Leaders’ debate and the remaining campaign

On 18 April at 7pm, the leaders of the three main political parties take part in a debate on ITV Wales. Labour has been in government in Wales since the Senedd first started in 1999.

But that could change. Opinion polls predict that Labour could lose seats in this election. So it’s doubtful how an appearance from an already unpopular Starmer would affect Labour’s chances of success in Wales.