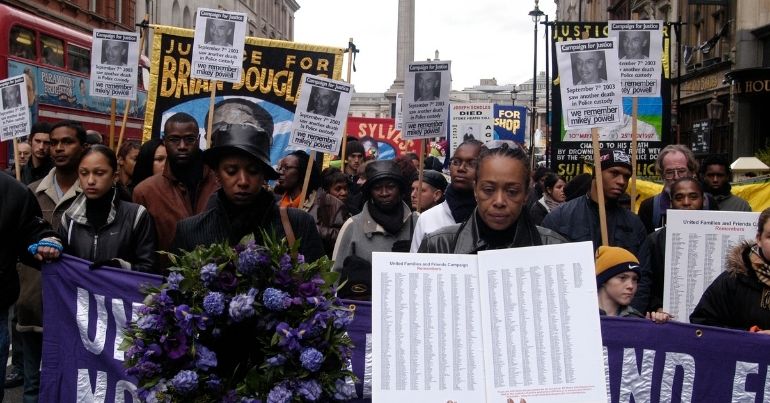 Content warning: the article below contains details of deaths in police custody that readers may find distressing

Preparations are underway for the United Families & Friends Campaign’s (UFFC) annual rally and remembrance procession. The campaign group is made up of bereaved families and others affected by deaths at the hands of UK police, in prisons, in immigration systems, and psychiatric custody. Since 1999, UFFC has organised an annual procession and rally to remember their loved ones and to demand justice for those killed by police and in custody. This year’s rally will take place in central London on 30 October 2021.

Bereaved families of people killed at the hands of the state established UFFC in 1997 to demand accountability and systemic change. This was originally a Black-led organisation, given the disproportionate number of Black people killed in custody. Today, the group supports and campaigns on behalf of all families who has lost a loved one to state violence.

There have been at least 1,797 deaths in police custody or following police contact since 1990. But prior to the conviction of PC Benjamin Monk for the killing of Dalian Atkinson in June 2021, no officer had been convicted of manslaughter following a death in police contact or custody for 35 years. In the wake of then-serving police officer Wayne Couzens’ false arrest, kidnapping, rape, and murder of Sarah Everard, the Met has announced that it’s launching a review of professional standards and internal culture within the force.

Regarding the announcement of an inquiry, UFFC campaigner Marcia Rigg said:

I believe that the scope of the inquiry should be widened to look at other deaths and the way that those investigations are carried out or put to bed, so to speak

Rigg’s brother Sean Rigg died in custody in 2008 following prone restraint by officers while he was experiencing a mental health crisis. The 2012 inquest found that Rigg died of a cardiac arrest following “unnecessary” and “unsuitable” restraint. However, only one officer was subjected to criminal investigation in relation to the case – sergeant Paul White. White was charged with perjury, but was later acquitted. All misconduct charges against the five Met Police officers in relation to Rigg’s death were dropped in 2019.

Highlighting the need for justice and accountability for every death at the hands of police, UFFC campaigner and Ultraviolence director Ken Fero told The Canary:

The United Families & Friends Campaign welcomes the recent public attention that has been brought on the issue of lethal police violence following the successful prosecutions of serving police officers for the killings of Dalian Atkinson and Sarah Everard.

We march this year, as we have done since 1999, so that public attention is brought to the many hundreds of other cases of deaths at the hands of the police over the years. These deaths also need justice and we gather to remember our loved ones and demand political action on these cases.

State violence in the UK

The 2017 Angiolini review set out over 100 recommendations on how institutions could minimise the risk of death in custody and better support bereaved families seeking justice. The government has implemented some, but not all of these recommendations.The number of deaths in or following police custody slightly increased between 2018/19 and 2019/20. However, even now, bereaved families are still fighting for justice and struggling to have their voices heard.

Rather than instituting rigorous changes that could see the number of deaths in custody drop, the government now seeks to strengthen the authority and legitimacy of oppressive state forces. If passed, the draconian Police, Crime, Sentencing and Courts Bill would further increase police powers and impunity, and it will expand the carceral state in the UK. Meanwhile, the proposed Nationality and Borders Bill would further intensify the cruel hostile environment which has already claimed lives. These changes would likely disproportionately impact Black and other racially minoritised communities, working class communities, neurodiverse people, and people experiencing mental health crises – people who are already over-policed, under-protected, and who bear the brunt of state violence.

No justice, no accountability

UFFC’s network includes the families of:

Their bereaved families – and many, many more – are yet to see justice or accountability.

UFFC’s annual procession is supported by a host of organisations including Black Lives Matter UK, 4WardEverUK, INQUEST, Tottenham Rights, Sisters Uncut, the Newham Monitoring Project, the Institute of Race Relations, and the National Union of Students.

UFFC’s remembrance procession begins at midday on 30 October. Anyone looking to take part can join them at Trafalgar Square. The group will lead a silent procession through Whitehall. This will be followed by a “noisy protest” outside Downing Street. The Northern Police Monitoring Project (NPMP) has organised a coach from Manchester for people looking to join from the Northwest. UFFC is also urging people to bolster the campaign by donating to the National Mikey Powell Memorial Family Fund, which supports the families of people killed in custody.

The fact that families and campaigners are still fighting the same battles decades later underlines the legitimacy of calls to abolish prisons and policing. In these distressing times, it’s important that we raise our collective voice in solidarity with bereaved families to demand justice, accountability, and an end to the potentially lethal expansion of police powers, prisons, and immigration detention sites.