Man shot dead by police was not a danger to anyone, family says after inquest - The Canary 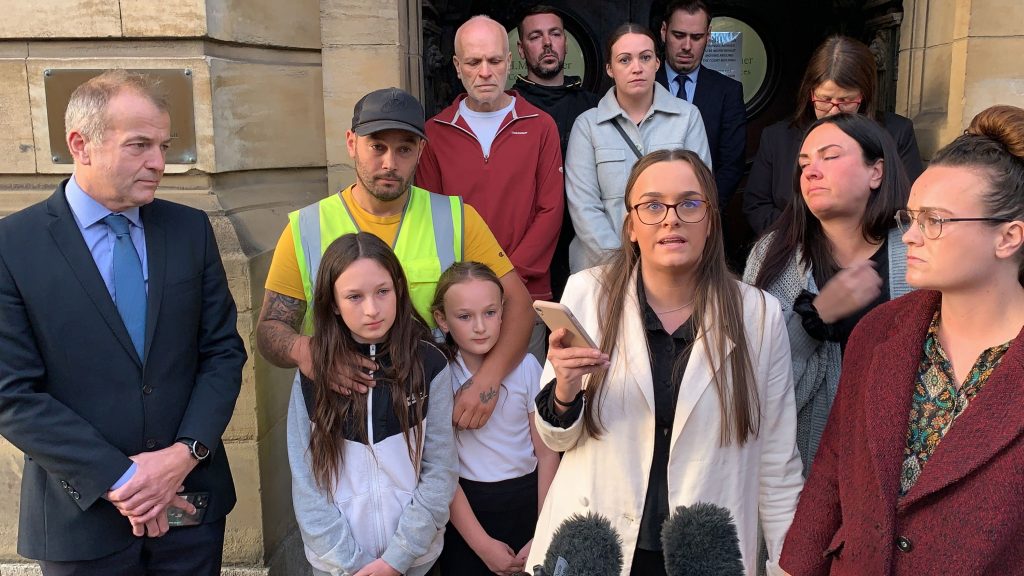 There was nothing to suggest a “confused and frightened” man who was shot dead by police “was aggressive or a danger to anyone on that day”, his family said after an inquest jury found he was unlawfully killed.

Shot in the back

Lewis Skelton, 31, died after he was shot twice in the back by an officer in Hull city centre when tasers had no effect, an inquest jury heard. Hull Coroner’s Court was told how Skelton was carrying an axe and had failed to respond to officers’ instructions to stop before he died five years ago. There were emotional scenes in court on 22 October after the jury returned its unanimous conclusion following eight hours of deliberation.

Humberside Police said it was “disappointed” by the decision, pointing out that the police watchdog had cleared the officers involved and flagging-up a recent change in the law which makes it easier for juries to hold officers accountable for their actions.

In a statement read outside court by his sister Tia, Skelton’s family said:

The jury has confirmed what we all knew, the killing of Lewis was wrong and it was unlawful and he should still be with us today.

There was nothing to suggest Lewis was aggressive or a danger to anyone on that day. He was confused and frightened. His final moments being must have been ones of terror and fear, and that is so hard for us as a family to know.

The family criticised reports at the time that Lewis was “a crazed axe man” and “axe wielding”. Tia Skelton said:

All who have seen and heard the evidence during this inquest will have come to realise those descriptions of Lewis on that day could not have been further from the truth. We are grateful to the members of the jury who recognised that the people in the wrong were the officers of Humberside Police, and not Lewis.

What happened to Lewis has torn our family apart and broken all our hearts, affecting each and every one of us in unique and different ways. Lewis needed help but he was killed. He should never have been taken from us.

The jury heard that Humberside Police received a number of 999 calls on 29 November 2016, saying a man was walking down Holderness Road carrying an axe. Armed police were deployed and two officers caught up with him.

The officer who fired the fatal shots – only identified as B50 – described how Skelton failed to stop when challenged and the use of taser four times by both he and his colleague – identified only as Charlie – had no effect. He fired two live rounds in Francis Street from his Glock 17 pistol as Skelton approached a group of workmen and he said he believed their lives were at risk.

Skelton’s parents, Helen and Glen Skelton, have described how their son was a passionate Liverpool fan who also loved music and animals. They said their son struggled with mental health problems.

In a formal witness statement read to the court, Glen Skelton said his son started taking heroin when he was about 18 after getting in with the “wrong crowd”. He later developed psychosis and the jury heard he had recently stopped taking his medication when he was shot.

We are disappointed with this conclusion and are concerned that it does not undermine the confidence of officers to act decisively when making split-second decisions to protect the public.

Noble said the Independent Office of Police Conduct (IOPC) investigation found that the actions taken by the officer “were proportionate to the risk that was identified to members of the public”.

Noble said a recent change in law meant that inquest juries no longer had to use the criminal standard of “beyond reasonable doubt” to come to an unlawful killing conclusion. He said:

Additionally, the jury had to make its decision in very different circumstances to those that confronted the officers on the day. Our officers responded to four 999 calls to a man armed with, and waving, an unsheathed axe marching towards the city centre who did not stop despite four attempts to Taser him.

Writing for The Canary, Sophia Purdy-Moore has reported on the long history of police officers getting away with what victims’ relatives have called murder.

Lewis had walked past many people, but not approached anyone. Yes, people had expressed concern, but people were not threatened, and when police armed response teams were alerted, they were told it was a ‘low threat situation’.

Sadly, from that point, a series of events unfolded in which decisions were made which were wholly inappropriate for the situation.