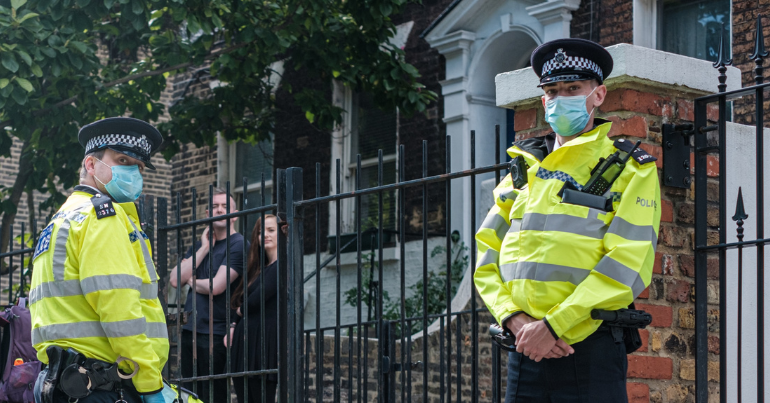 A man has died after Hertfordshire Police restrained him during a mental health crisis. Police arrived after receiving reports of a man running in the street in distress late on Friday 7 October. Hertfordshire Police have now referred themselves to the IOPC (Independent Office for Police Conduct).

The BBC reported the IOPC as ‘understanding’ that:

officers reported the man appeared to be having a mental health crisis so the ambulance service was also called.

The man is understood to have become unwell while being restrained at the scene…Officers began CPR until paramedics arrived shortly before midnight, but the man was pronounced dead at 00:17.

The IOPC confirmed that Hertfordshire Police used PAVA spray (pelargonic acid vanillylamide), an incapacitant. It is unclear, and likely will remain so, why exactly the police chose to use an incapacitant spray on someone experiencing a mental health crisis.

The director of the charity INQUEST, Deborah Coles, set out the facts:

A man in mental health crisis is Pava sprayed, restrained and dies. A long pattern of deaths and no systemic change or accountability. We need to end police being first responders to people in crisis and invest in emergency mental healthcare. https://t.co/9pu93lwc3s

The Network for Police Monitoring (Netpol) also noted the use of PAVA spray:

On Friday, a man having a mental health crisis and in distress died after he was sprayed with CS spray and restrained by Hertfordshire Police officers https://t.co/RWg2XvKKW3

As the Canary’s Emma Guy has outlined:

PAVA spray is a chemically concentrated version of pepper spray that’s been a controversial deterrent due to its £2m rollout expense and its proven misuse in pilot trials.

And according to Mental health charity Mind:

PAVA spray is used as a defence tool to stop people resisting. It is sprayed into people’s eyes causing them to close and resulting severe pain. It is mainly used by police officers.

Mind also cited a study which found that PAVA spray was used disproportionately against certain groups:

[the study] revealed disproportionate use of force in prisons against younger people, black people and Muslim people, which the Ministry of Justice was unable to explain.

PAVA spray is a type of pepper spray that is clearly controversial, whether used by police officers or in prisons. The fact that Hertfordshire Police used it on someone who was in mental distress is a travesty.

Time and time again, the police harm members of the public who are having mental health crises. Just this year, INQUEST found that Oladeji Omishore was “experiencing a mental health crisis” when police officers confronted him with tasers. Oladeji backed off from the officers and jumped into the river below in an apparent attempt to escape. He died shortly afterwards.

We don’t yet know more details about the man who died in the custody of Hertfordshire police. However, it’s clear that police turn mental health crises into tragedies. A report from the IOPC found that:

In the majority of cases involving either allegations of discrimination or common stereotypes and assumptions, there was evidence that the individual concerned had mental health concerns or a learning disability. This supports findings by others that the intersectionality of race and mental health can increase the risk of higher levels of use of force.

When people are in mental health crises, policing is not the answer.

Instead we need mental health care and interventions which:
– support those in crisis
– address the root causes of mental ill-health and distress
– put human rights at their hearthttps://t.co/RWsg9T0T9u

Police do not protect the public, or communities at large. Given their endemic racism and regular lack of accountability, we cannot rely on them to be truthful. We must resist police violence, and we must do so together. How many more times do police need to kill people experiencing mental distress before anything changes?