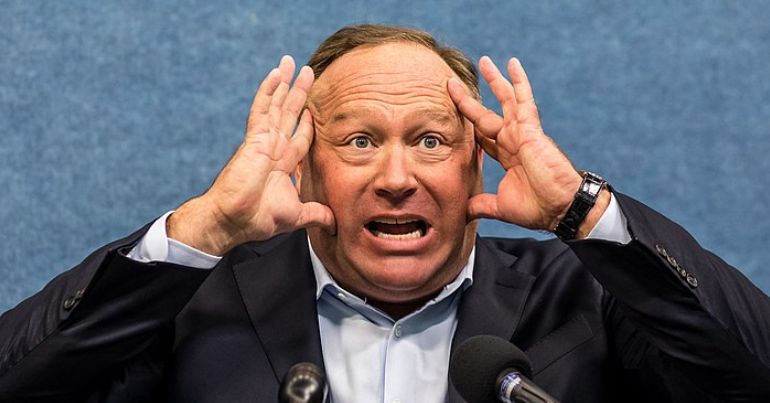 InfoWars host and conspiracist windbag Alex Jones may have finally got his comeuppance. A US court has ruled that Jones must pay $965mn to victims of the Sandy Hook massacre after Jones made bizarre, false claims about the 2012 elementary school massacre.

Family members of eight of the 26 victims and an FBI agent sued Jones for ai list of conspiracy claims over the tragedy, according to the BBC. Some family members broke down in the Connecticut courtroom as the ruling was announced:

It was an emotional moment in a Connecticut court as a jury ordered conspiracy theorist Alex Jones to pay nearly $1 billion in damages to families of the victims of the Sandy Hook mass shooting, which he falsely claimed was staged https://t.co/ZeDzZso6Lt pic.twitter.com/B3bNEok80J

In Jones’ role as host of InfoWars he claimed that the massacre was faked by the government and that the bereaved parents were ‘crisis actors’.

‘Crisis actors’ is a term often used by conspiracists (and other idiots) to suggest that people at the location of significant events are, in fact, staged actors in on some kind of scam.

The families of the Sandy Hook victims said they had received harassment and death threats as a result of Jones’ claims. Naturally, the ruling led to a lot of commentary on Twitter from both fans and critics of Jones.

For some, Jones’ behaviour regarding the Sandy Hook killings was a sign that he is beyond redemption:

I don't like to view anyone as beyond redemption, but if you wanna see a true piece of human shit, watch Alex Jones' real-time reaction to today's verdict.

Others took a moment to marvel at the weird mental contortions the ruling inspired in Jones’ fans. Some of them decided to conflate it with the Covid-19 pandemic, a favourite of fantasists the world over:

Imagine being so empty that this is your reaction to Alex Jones? https://t.co/t7re8IiF0e

Jones’ support base is known to be extremely far-right. Their response to the latest development was, as one social media user pointed out, thoroughly cult-like:

Read some far right wing reactions to this Alex Jones verdict and then try to tell me it’s not a cult.

Jones appeared unrepentant, however. On his show, just minutes after the verdict came in, he told his viewers:

Do these people actually think they’re getting any of this money?

Citing other mass killings, he doubled down in his claims:

They want to scare us away from questioning Uvalde or Parkland.

One US politician rejected Jones’ whining about the ruling outright. He told his followers that real suffering was what Jones had inflected on the Sandy Hook families:

Alex Jones says “This must be what hell is like” after finding out he now owes nearly a billion dollars. No Alex….that’s not what hell is like….that would be like losing your child to a madman with a gun and then being accused of being a crisis actor while you try to mourn.

Another social media user gave short shrift to Jones’ supporters’ claims that their idol was a victim of the powers that be:

Alex Jones did not upset a regime. He lied about a bunch of dead children who were murdered in their school and spread innuendo about their parents. This isn't about free speech. It is about using free speech to slander dead and innocent children. That has consequences.

It’s not clear what will happen to Jones and his InfoWars show now, or even if Jones has the capacity to pay a bill of this size. However, if nothing else, the case has exposed the dangers of conspiracist ideology, particularly for the families of victims of terrible crimes like Sandy Hook.