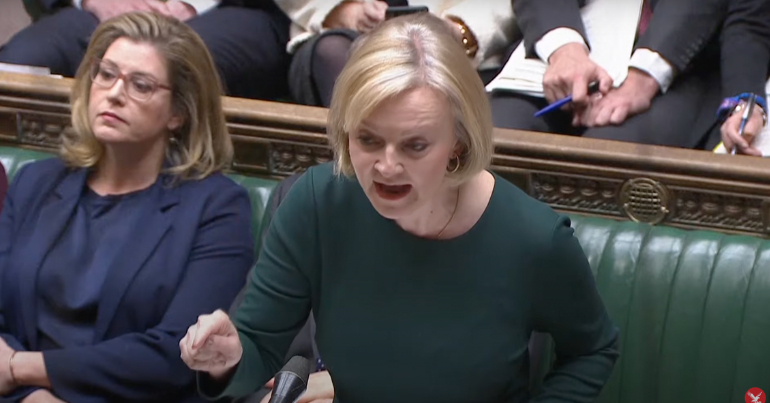 Liz Truss has had a disastrous first month at 10 Downing Street. Her chancellor has overseen a disastrous mini-budget that sparked unprecedented fallout from the Bank of England. Her government is presiding over an expansion of fossil fuel use that spits in the face of the climate crisis. And Truss is cosying up to Quatar, an authoritarian state, despite promising to stop…er…being dependent on authoritarian states for energy.

But this all just got worse with another disastrous performance at Prime Minister’s Questions.

Amongst all this, Liz has had to deal with potshots from commentators. Well, we’re certainly not above that – let’s get into it.

As political editor Pippa Crerar noted it only took one minute for Truss to perform a U-turn:

Within one minute of #PMQs Liz Truss u-turns on dropping ban on no-fault eviction of private renters. Tells MPs manifesto commitment will now go ahead.

It would appear the lady is for turning, after all.

Where did Truss go from there? Straight into ridicule:

I don't think Starmer quite knows what to with Truss at #PMQs.
It's like trying to explain trigonometry to a labrador. She just stands there, gazing uncomprehendingly at him.

A little unfair to labradors, but we’ll allow it.

Labour MP Luke Pollard said even Truss’ own MPs were less than impressed:

The Prime Minister was utterly hopeless in replying to @Keir_Starmer’s questions. This really is bad. Viewers at home watching #PMQs may not be able to see it but in the chamber you can see Tory MPs with their head in their hands, aghast at her answers. What have the Tories done?

Presenter Emily Maitlis pointed out that Keir Starmer has a pretty easy job on his hands:

All keir starmer has to do is repeat “ who voted for this “ to rattle the PM as she knows it wasn’t voted for by either her party , much of her cabinet or the country #pmqs

Well, how did our Liz end PMQs? As political correspondent Ava Santina said:

It just all seems very messy. Are cabinet properly talking to each other? Is anyone listening to what the others saying? Does anyone know what day it is

The Tory U-Turn doesn’t mean they “get it”.

The Tory U-Turn simply means they couldn’t “get away with it”.

Truss has proven in her first month in power that she’ll try anything she thinks she can get away with. That’s not a good enough political strategy during a time of several crises. Many in the country are facing a difficult winter, and the prime minister is rattling through terrible decision after terrible decision.

Many of us will be familiar with imposter syndrome, where self-doubt plagues those who are actually perfectly competent. That’s not the case with Truss, as Professor Paul Bernal explained:

Yes, I’m definitely using Liz Truss as the slide where I say no-one should ever suffer from imposter syndrome ever again. #PMQs